Drive-Bys Do Everything They Can to Excuse Democrat Dossier Lies

RUSH: “Adding further mystery to the ‘who knew what and when’ question was the revelation on Thursday that Podesta testified to the Senate Intelligence Committee earlier this month that he was not aware of who paid for the dossier.” But he was sitting right next to Marc Elias, the Perkins Coie lawyer who orchestrated a deal to pay Fusion GPS to create the Trump dossier.

As for Podesta sitting next to the guy who did it and lied about it for a year, for Podesta to say he was not aware strains credulity. Marc Elias was general counsel for the Clinton campaign and the DNC. He was also Podesta’s attorney. These people are thick as thieves. I don’t think any one of them did not know. There may be plausible deniability that they’ve tried to construct for themselves, but I think they all had to know what they were doing.

This was coordinated! And it had a specific objective, to get Trump out of there and to somehow get in the White House. I don’t doubt for a minute that’s what they were really shooting for here, even though she lost the election. They were entitled to this. This was theirs. They were running against a guy who wasn’t supposed to get 20% of the vote. It was her turn. They all were expecting to return to their positions of power inside government.

And I think they were disillusioned and deranged enough to literally think that if they could construct things and make this entire election look rigged, that that would even disqualify Pence from becoming vice president. I think they had every desire, as delusional as it is or as it sounds, I think at the beginning of this they were dreaming of somehow reversing all of this and getting Hillary in the White House. Do you doubt that?

Now, I guarantee you if this opinion of mine is put before panels on cable TV, “Limbaugh’s nuts. That’s outrageous. Has he forgotten the Constitution? That’s not possible.” Precisely it’s not possible. But I don’t doubt for a minute that some in this group were fantasizing about it, including Hillary. There was no one more entitled and thinking she was more deserving than her of getting this office. And there’s nobody in that whole camp that was probably more outraged at this election being stolen from her. They to this day don’t think they lost it.

They to this day don’t think it was possible that they genuinely lost. Something happened. And if they now have arrived at the hard, cold reality that she lost, it doesn’t mean that they have given up. I don’t think they any longer harbor the idea that they can install her president, but they want to make people pay for this. Their hatred is a poison. This is intense, raw hatred combined with resentment and anger and envy, and it has poisoned them, all of them. And I think they’re gonna come back here and get bitten real hard.

BLITZER: All right. So it’s very awkward. How could both the chair of the DNC and the Clinton campaign not know about these payments?

PANETTA: Well, it’s obviously something that the Intelligence Committee is gonna have to look at. You know, knowing presidential campaigns, they’re big operations, and somehow the left hand may not know what the right hand is doing.

BLITZER: If the lawyer who was representing the Democratic National Committee and the Clinton campaign, Marc Elias, is sitting next to John Podesta. Wouldn’t it be his responsibility at least whisper in his ear, yes, and tell him what was going on? So if he wasn’t lying, John Podesta, he would be able to clarify all of that before the committee in a sensitive issue like this?

RUSH: When you hear this as opposed to read it, it becomes even more ridiculous. Come on, Leon. “Well, you know, it’s a big operation. Somehow the left hand may not know what the right hand is doing.” These people know what every hand and every finger on every hand is doing. It stretches and strains credulity to believe this. Even Wolf Blitzer pointing out that Marc Elias was sitting right next to Podesta, who admitted earlier to lying for a full year about this.

Now, for you Millennials in the audience, this is typical Democrat obfuscation. “Well, you know, it’s really confusing. There’s a lot of people in there, and it’s entirely believable that so many powerful people might be acting independently, and one of them may not know what the other’s doing. Yeah, Wolf, it’s entirely believable that this was nothing but innocence and that nobody knew what was going on.”

For those of you who are not old enough to remember, I take you back to July 20th, 2004. Then-governor Bill Richardson, Democrat, New Mexico, was talking about Sandy Berger. Now, Sandy Berger was a national security director for the Clintons, for Bill Clinton during his term in the 1990s. Sandy Burglar — uh, sorry — Berger, Sandy Berger was found to have stolen documents from the National Archives.

Sandy Berger went to the National Archives and stole some notes about the Clinton-Lewinsky thing and tried to get out of the archives with the notes in his socks. Do you remember? Now, you Millennials may not. That’s why I’m telling you. I want you to listen to the excuse that Bill Richardson offered. And Bill Clinton, by the way, pretty much said the same thing.

RICHARDSON: Well, obviously Sandy’s admitted to a mistake in that process, but I’ve known him for 20 years. I’m sure it was a careless, sloppy moment. An investigation is going on. But I believe that what Sandy was — I always remember him as disheveled. You know, he had 50 papers running around, his tie was off, sort of like me. (chuckle) And — and I just think maybe this is a case of sloppiness. I don’t think there was any malicious intent.

RUSH: Oh, no, of course not, he wouldn’t have purposely put those papers in his socks. That had to be sloppiness. You know Sandy. And this is what Bill Clinton said. (Clinton impression) “Hey, you know, Sandy worked for me a long time. That guy, he’s one of the sloppiest people you ever saw. You didn’t want to walk in his office. You might not be able to find a pathway to the chair to sit down, there’s so much crap on the table, on the floor. I’m telling you, Sandy, if something ended up in his socks on the way out of the of the of the National Archives, I just I just think that, you know, Sandy might have thought his socks were a wastebasket. I don’t know.” In which case, what’s he doing throwing anything away?

No, the guy stole stuff. He was trying to get documents out of there. I forget — he was either trying to keep them from being found or he needed them to refresh his memory about something. And he literally took them out of there. And all the Democrats circled the wagons: “He’s just sloppy, Sandy, everybody knows, hell, he probably didn’t even know they were in his socks. He just a good old guy like that.”

And now here’s Panetta, “You know, in the terms of buying that dossier, I mean, the left hand didn’t know what the right hand was doing, and I can totally understand that nobody knows who did it over there. And, in fact, the person who did do it probably doesn’t remember doing it, disorganized.” It’s typical of how they lie their way out of these things. And don’t forget, they’ve got the help of the Drive-By Media furthering whatever excuse they give.

RUSH: I have had some people tell me that they don’t ever remember hearing John Brennan say that the dossier formed the basis for the investigation. Friends, I mean, I’m not talking about opponents or enemies. “Rush, you better be sure about this.”

“Well, you look harder.” So I called Cookie. I said, “Would you search our sound bite archives?” We’ve got it set up so we can keyword search even the audio ’cause we keep the transcripts. You keyword search for “Brennan” and “basis.” She said, “We don’t have it.”

I said, “Well, that just means we didn’t have the bite, but I know I saw this, and it had to be here and it happened to be on one of these two monitors and it happened to be before the show. I saw it.” So Cookie, she took off all of the binders, and she went, and I think this is a LexisNexis search, although I’m not entirely sure, but we found it, is the bottom line.

It happened May 23rd, 2017, on Capitol Hill. It was during a House Intelligence Committee hearing, the former CIA director John Brennan testifying. He’s being questioned by Trey Gowdy and they’re talking about the dossier. And let me get to the relevant question from Gowdy. He said, “It doesn’t help us a lot. What was the nature of the information?”

Brennan: “I’m not gonna respond to particular elements of your question because I think it’d be inappropriate for me to do so here. I can only repeat what I said, which is that I was aware of intelligence and information about contacts between Russian officials and U.S. persons that raised concerns in my mind about whether or not those individuals were cooperating with the Russians either in a witting or unwitting fashion, and it served as the basis for the FBI investigation to determine whether such –” right there. It was May 23rd. They were talking about the dossier. He denied it later in the same hearing. 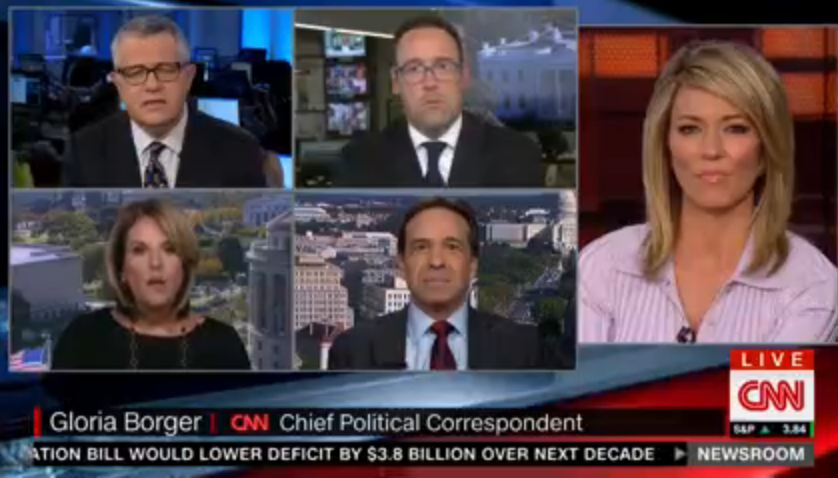 BORGER: What you want to do is —

BORGER: — keep the candidate with a certain amount of deniability.

BORGER: And I think that this is the way it works

RUSH: Gloria, this may work on the slow and out of touch CNN audience, but, come on, man! In the first place, this is not opposition research! Opposition research is stuff that’s true that your investigators dig deep and find. This was made up! This was commissioned. This was bought and paid for through a Democrat lackey law firm cutout, Perkins Coie. Marc Elias lied for a year about their involvement.

She would never make this excuse if Republicans were involved. “In the dark world of opposition research what you want to do is establish an awful lot of distance between the candidate and the people close –” BS! This was not opposition research. This was totally commissioned artwork, if you will, and totally made up. It was intended to do great damage to the Trump campaign, cause Trump a lot of hassle. It ended up being used as the basis for official investigations.

(imitating Borger) “There’s no way Hillary would have known. Oh, no. In the dark world of opposition research, of course you want to keep as much distance from the candidate.” This from the woman that ran the bimbo eruptions unit in the Clinton war room? But I wanted you to hear it ’cause it’s just an example of how the media and the Drive-Bys do everything they can, because I guarantee you Podesta’s her friend and Hillary is her friend and the law firm, Perkins Coie, people there are her friends, Podesta is her friend, and it’s circle the wagons time.