Column Confirms What I’ve Been Saying About Liberals for Decades

RUSH: I told you I had come across something in the media while I was gone that pretty much confirms almost verbatim things I have said to describe the people on the left. This is a story, a column, a piece, a post, whatever from Slate.com, well-known uber-leftist website. And the writer — doesn’t matter who it is — could be anybody that works there. It could be anybody at NBC writing this, anybody at CBS, ABC, CNN, take your pick, Salon.com, doesn’t matter, they’re all the same.

Headline: “2016 Was the Year White Liberals Realized How Unjust, Racist, and Sexist America Is.” How many times have you heard me tell you, have you heard me describe for you the way Obama and the left look at this country? They think it’s unjust. It is immoral from the days of its founding, because it was founded as a racist and sexist and homophobic country. It is unjust and we need to cut it down to size. We’re not a deserving superpower. We’re never a legitimate superpower because we acquired our superpower status by virtue of stealing from the rest of the world or by oppressing the rest of the world. This is what they believe. How many times have you heard me say this over the course of the many years here. Well, right there it is, in the worlds of somebody named L. V. Anderson. I don’t care who it is, as I say, it could be Chuck Todd, take your pick. Just two paragraphs.

“The sense of disillusionment white American liberals woke up with on Nov. 9 was powerful enough to taint the entire year with a sense of doom. So many illusions were shattered by the election of Donald Trump: about the media, polling, the Democrats’ vaunted ground game, the fundamental character of our fellow citizens, the viability of the American experiment.

“After Trump’s election, it is more or less impossible to believe that we are making meaningful progress. White liberals who woke up horrified on Nov. 9 weren’t horrified because the world had suddenly changed — we were horrified because the scales had finally fallen from our eyes, and we could at least see our unjust, racist, sexist country for what it is.”

And then along comes this campaign and Trump wins, and they’re now feeling like everything was an illusion. You know what? It turns out that it was. It turns out they weren’t the majority. And don’t give me this “popular vote” business, either. That popular vote advantage Hillary has from one state. The fact of the matter is, when the issues of this campaign were put before the people the way presidents are elected in this country, it wasn’t close.

Barack Obama — here’s another thing. You know, Obama’s out there saying — I saw this when I was away and I got a great chuckle over this. Did you see this? Obama essentially said (imitating Obama), “You know what? If I were on the ballot third time, I would have won. I could have beat Trump. Hope and change would have beat Trump.”

Well, now, how do we know that that’s a crock? No, no, seriously, how did we know? We know that that would not have happened. Well, it’s hard to say what would have happened. But if he says that hope and change, i.e., his agenda would have won again, well, we know it wouldn’t have. ‘Cause it already lost. His agenda is what got defeated. Barack Obama put his agenda on the ballot. He put his eight years of his presidency on the ballot. He campaigned not for Hillary Clinton, but for his agenda. Hillary Clinton was an afterthought. 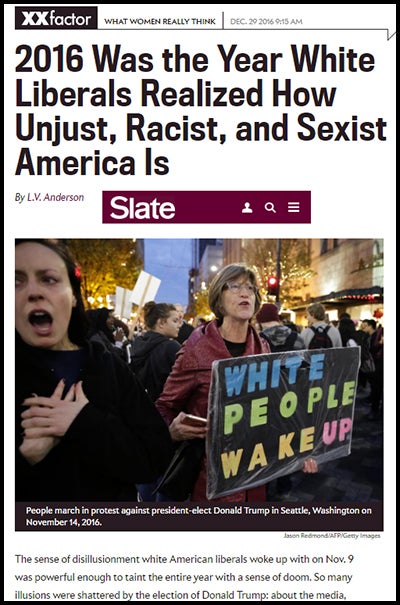 This business of connection, it’s important to understand what I’m talking about. I think Obama does not have the personal connection with voters that a Reagan had or that Trump has. What Obama had was guilt. He had years and years of guilt that could potentially be assuaged by voting for him. Racial guilt. He did have in the first year hope and change, and he had this empty canvas. He could be whatever you wanted him to be. They had drummed up sufficient hatred for Bush.

I think he thinks he had that connection. I think he thinks that he’s a personal star with the American people, and I don’t get that sense. A lot of people voted for him, but he put his agenda on the ballot and he’s out there campaigning not for Hillary, but for him. “If you want a third term of me, if you want my agenda to continue, you have to vote for Hillary ’cause I can’t run.” He wasn’t out there extolling her virtues, other than at the convention when he said something nobody believed, that she’s the most qualified person to ever seek the office. (laughing)

We laugh. I mean, pure caca. But he put his agenda on the ballot and it lost. His agenda and his eight years were personally repudiated. The left can’t — that’s another thing. That is a stark reality and they can’t abide it. They think that’s a construct. They think Trump’s win is not real, it’s a construct, something happened, and so it’s got to be changed, and that’s why they do these foolish, stupid things like make videos to the electors and make videos to the Senate, “Don’t confirm Trump’s nominees,” you look at them and think it’s stupid! But it’s not.

If you understand that they don’t think reality is real. They think reality is reality is just a contest that they lost, so they have to change it. But I’m talking about what really is reality, like Trump won the election. That’s real. But not to them. The Russians did it or something happened. But it’s not real. They got cheated, they got snookered, they got tricked, something. But it isn’t real. And that’s what explains their totally discombobulated behavior.