They Still Talked About Me — Even Though I Was Away!

RUSH: I’ve got to get some of these sound bites that happened when I wasn’t here. Some of them are just too good, and, if I don’t get to these, I’m gonna have so much stuff backed up, I’m never gonna get to it.

We start Monday, December 26th. This is David Axelrod’s podcast called The Axe Files, and he’s got Obama on there as a guest, and he and Obama are reviewing Obama’s presidency and what he’s gonna do in his post-presidency and Obama’s wringing his hands over what all’s gone wrong. And Axelrod says, “Maybe we didn’t spend as much time on connecting with voters while you were here.” I’m telling you, they know Obama didn’t have this connection. They’re living an illusion thinking the country hinges on Obama, whether he’s here or not.

You don’t have that connection. He never did. Hillary never had it. It’s rare. Reagan had it. Most politicians don’t until they’re long gone, but they think Obama did. But here’s Axelrod in his question admitting it. “Maybe we didn’t spend as much time on connecting with voters,” meaning conservatives, people that weren’t inclined to agree with him. “I mean,” Axelrod says, “we’re trying to save the economy and doing these other things.” We’re trying to save America, we’re trying to do these big things, and maybe we didn’t spend enough time connecting with, like, conservatives and stuff. 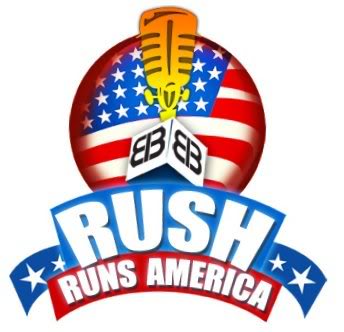 OBAMA: When we were campaigning, we could connect. Once you got to the White House and you were busy governing, you are then more subject to the filter. It was Rush Limbaugh —

OBAMA: — and the NRA and there are all these mediators who are interpreting what we do. And if we’re not actually out there like we are during campaigns, then folks in — in a lot of these communities, what they’re hearing is, “Obama wants to take away my guns.”

OBAMA: “Obamacare is about transgender bathrooms and not my job. Obama is disrespecting my culture and is primarily concerned with coastal elites and minorities,” and so — so part of what I’ve struggled with during my presidency —

OBAMA: — and part of what, I think, I’ll be thinking a lot of after my presidency is, “How do we work around all these filters?”

RUSH: No! (chuckles) There he is blaming me. He’s blaming me for his lack of ability to connect. The simple fact of the matter is that Obama was about transgender bathrooms! Obama was about gay marriage. Obama was about things that would disrupt the culture. He was about guns. There’s no question that if he could have found a way — and Hillary and the rest of them — that they would do away with the Second Amendment. Nobody doubts that. And for him to sit here and say (impression), “Well, they’re out there thinkin’ I’m gonna do that…”

Damn right we were because we were right, and what he calls “filters” is simply opposition. And they can’t stand opposition. Obama and the left, they don’t think there should be any opposition. Obama: “Disrespecting my culture primarily concerned with coastal elites.” It’s not… That is how he hears the criticism. Anyway, same program, Axelrod said… No, no. Different program. On CNN’s Situation Room, the host says to… I guess this is Axelrod: “Did the president accept any of his own responsibility for the loss and for the tough position that Democrats are in today?” 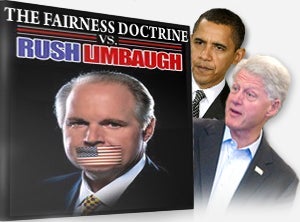 AXELROD: What the president said was, yes, we connected with these voters in campaigns. But once in the White House, uhh, with all that was on our plate, he suggested — again, implicitly — that perhaps there was some neglect there. But he also said that Democrats have to find a way to reach these voters and penetrate the filter of a Rush Limbaugh and some of the, uh, right-wing talk, uh, talk radio internet sites, uh, and so on, which he says has, uh, “distorted,” uh, the message as well. So that’s a project that Democrats have to work on.

RUSH: Well, I’m sorry, but that’s been a project of theirs for about 25 years, hasn’t it? They’ve been trying to find a way around me for 25 years and every time they lose they blame me for it. Look at that! Of all the people to blame. They don’t blame Trump. They blame me. Because of the filter. And all it means is there’s one guy out there… Not one guy. What this means is there was somebody out there telling the truth about Obama, and that’s what they can’t abide, and that’s why they lost. “We’ve gotta find a way around somebody who’s gonna tell the truth about us.”

Now, of course they can’t admit that, but that’s what this is. By the way, when Obama gave that speech of his or that appearance or wherever it was where he said (impression), “If I’d’a been on the ballot, I would’a won! If I’d’a been on the ballot, hope and change coulda won a third term.” He went through all the reasons he lost. Did you hear him in these two answers, him mention Russia as the reason he lost? You didn’t, because he didn’t say it!

At no time in any of these postmortems has Obama blamed Russia, and yet the Democrat Party and the American left, Meryl Streep and the Hollywood left, they’re all blaming the Russian hack for the reason Hillary lost! But then when they talk to people in the media, they don’t even mention Russia. Well, if Russia was the reason they lost, why not say that instead of me? (impression) “Well, we weren’t able to overcome that Russian hack. You know, the Russians — and I told Vladimir Putin! I said, ‘Cut it out! Just cut it out,’ and he did for a while but then he resumed again. Well, and then…” (snorts) These people are so full of it. Funny!

RUSH: Lawrence Rosenthal is the chair and lead researcher of the Berkeley Center for Right-Wing Studies, University of California Berkeley. They study the right wing. And so this guy, Lawrence Rosenthal, was on C-SPAN on December 27. Here is a portion. We have two sound bites.

ROSENTHAL: Donald Trump had prepared himself in a serious manner for his run for the presidency. His method was to immerse himself in right-wing media. This practice included listening to talk radio, the likes of Rush Limbaugh, monitoring Tea Party websites and discussions, and following right-wing news sites like the Drudge Report and Breitbart News.

RUSH: There you have it, Lawrence Rosenthal of the Center for Right-Wing Studies at Berkeley claiming that the way Trump got there is to listen to me, to study me and to go out and emulate this program. And he wasn’t finished. We have one more clip from the guy.

ROSENTHAL: What Trump found there was a collection of themes and online memes that constituted the universe of taken-for-granted understandings among the populace right base of the Republican Party. Trump stored these up like a reservoir of riffs that would be available to him. This was the stuff of his free association style of campaigning. And while these themes and memes resonated profoundly with crowds at his rallies, the outside world, liberals and Democrats and establishment conservatives and Republicans, what he was saying was outrageous, beyond the pale, embarrassing, offensive.

RUSH: And yet he won! (laughing) So who’s the minority here and who’s the majority, Mr. Rosenthal? And finally, Corey Lewandowski, former Trump campaign aide, January 4th on Hannity — gauging time here — the question’s longer than the answer. Question: “What do you think the election became about, Corey, what was it really all about?” 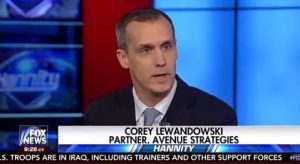 LEWANDOWSKI: Talk radio and Rush Limbaugh and others has been so important to the rise of the Donald Trumps of the world. Giving everyday people the opportunity to hear the other side of the aisle, right? The other side. Because the Democrats have controlled the mainstream media. So if you’re not in your car, and you’re not working, you’re not listening to that talk radio.

RUSH: Right. There you have it. So two different guys there — and this all happened when I’m gone. I don’t even know it’s happening. I didn’t even know this stuff is taking place until I get here today and Cookie shoots me the sound bite roster, and I said, “The audience has to hear this stuff,” so you did, and I was able to squeeze it in.

Okay, now, tomorrow I’m promising we’re gonna go more in depth than I did today on the hacking, ’cause, folks, there are some fundamental things here that the Drive-Bys are not telling you that I want you to know about it that further nuke their entire premise, and the Republicans and Obamacare, and this is crucial. And it kind of ties in with what Newt said, but I’m not endorsing that.