What Mr. Newt’s Worried About

RUSH: So what do you think about Newt? What’s the date of this? I printed it out on January 1st. New Year’s Day, Newt is on This Week, Stephanopoulos’ show. He was asked what he fears the most during a Trump presidency. Newt said that they will lose their nerve. I mean, look, they’re going to arrive in Washington and for them to be successful, they have to stake out positions that Donna Brazile — how is that woman still on TV? An acknowledged cheater, I mean, it’s a rhetorical question, I’m just trying to make a point by asking it. 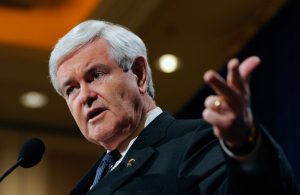 I mean, if you’re serious about school choice, if you’re the Trump team coming in, there is no agreement with the teachers union. There is no compromise with the Environmental Protection Agency. There is no common ground with the Department of the Interior. I’m worried, Newt said, that when they realize how big the problem is, that they’re gonna decide, you know what, we don’t want to work that hard, it’s too massive. We’re just gonna try to nibble away here every day and do the best we can and essentially give in.