What to Watch For in Obama’s Farewell Address

RUSH:  Oh, yeah, that’s right.  I forgot.  Tonight is Obama’s swan song speech.  Oh, yeah!  The farewell address.  What do you think that’s gonna be?  What’s Obama gonna…? I just saw the little promo up there on CNN: “Obama Farewell Address Tonight!” They got a countdown, 7 hours, 53 minutes, 43 seconds to the Obama farewell address!  Big whoop.  But what do you think it’s gonna be?  Well… (interruption) Oh.  Oh.  Yeah.  I do think he’s gonna mention the media.  I tell you what I think it’s gonna be.  I think Obama’s farewell address is gonna have the following tone.

Now, he’s not gonna say it in these exact words, but the message from Obama is gonna be, “You didn’t realize how good I was.  You didn’t realize how good you had it.  And one of the reasons you didn’t is because we have an out-of-control media.  We’re not all dealing with the same set of facts like we used to before 1988.  Now, we got all kinds of different facts. Everybody can make up their facts, put it out there, and I am so good but you never knew it.  I’m the best thing that ever happened to this country, but most of you don’t know it, and it’s a shame for you.

“I gave it my best, but you never realized what you had in me.”  It’s gonna have that kind of tone. Do not doubt me on this.  And he will — you’re right, Snerdley, he will — talk about the “filters.”  Filters is the code word for talk radio.  If you hear him talk about “filters,” I want you to think my name, because that’s what’s in his mind, folks.  I mean, we have this on tape over the weekend, the Axelrod podcast and a couple of other interviews he’s actually said so, actually mentioned my name as being one of these people responsible for the different set of facts than what everybody else has.

In other words, “We used to have a media monopoly where all of us on the left got to define and determine what everybody knew; and since 1988, that had been the case.  We lost our monopoly in 1988.  Now people get to bring their own facts in, and people are confused, and it’s a shame ’cause I’m the best thing that ever happened to this country, but nobody knows it or not enough people know it,” because of me.  And there’s gonna be…  I guarantee you he’s not gonna be able to help himself.

There’s gonna be, “I could have been even better if you’d have just realized what you had,” meaning you, the American people. “If you’d have realized just how brilliant and good I am, I could have been even better.  Well, for some reason I wasn’t able to overcome it.”  He won’t blame himself.  He’ll blame “the filters,” and then he’ll give a shout out to his Hollywood friends.  Have you seen this pathetic video going-away present from these Hollywood celebrity types? The so-called A-listers have done a video that is… I don’t know what it is.  Obama’s greatest hits.  It’s a, “Thank you, Mr. President, for all you’ve done” type thing.

And the purpose of it is to relive the highlights of the Obama administration, and there’s some things that none of these celebrities mention.  For example, Obamacare is not mentioned by any of them, as in, “Thank you, Mr. President, for saving Americans’ health care.  Thank you, Mr. President…”  There’s none of that.  There’s nothing about the Iran deal.  Not one of these celebrities mentions the greatness of the Iran deal.  I say that because Obama thinks that’s one of his greatest achievements.  You’ve got, what is it, Leonardo DiCaprio, and he thanks Obama for everything he’s done on climate change.

Let’s see, what else is in there?  We got Tom Hanks in this thing; they’ve got Samuel L. Jackson.  Oh, you know who else they don’t mention?  Bin Laden.  They don’t mention him. This is one of Obama’s signature moments, right?  He beat bin Laden and saved General Motors.  They don’t mention that.  It’s pure surface that these A-list celebrities mention in their video.

RUSH: Here’s an example of what I was just saying — an AP story, of all places.  It’s another poll, an Associated Press poll.  “Obama Won Nation’s Approval But Didn’t Unite It.”  No kidding! “More Americans feel Barack Obama’s presidency divided the country than feel it brought people together, according to an AP poll.”  Yep.  So Obama’s swan song speech is tonight.  I wouldn’t want to be the person that has to tell him about this poll.  They probably won’t.  But there’s no doubt about this.  “Obama Won Nation’s Approval But Didn’t Unite It.” 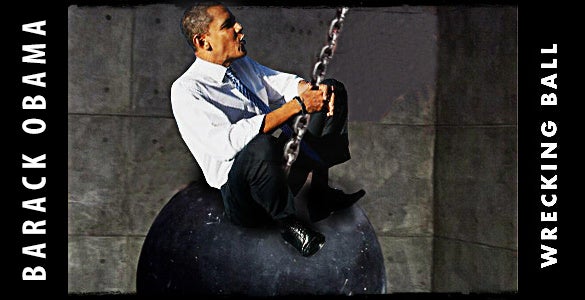 You know, there’s no reason for this approval, folks.  If you look at polls on what people think about Obama’s agenda and policies, not very many support them now.  If you look at this concept, “Did Obama unite America?”  No, he didn’t.  And yet you look at his personal numbers, and they’re what, 55%?  I don’t know.  It’s a majority.  There no logical explanation for this.  I mean, there’s no correlation.  If people think he did not… In fact, it’s not just that.  If people think that his presidency led to a more divided America, what the hell is there to support about that?

And if people don’t like Obamacare — and, by the way, a majority of Americans want it repealed. I mean, you can’t find an Obama policy that has majority appeal, and yet he does.  “What explains this?” I ask rhetorically.  “He’s likable.”  Okay, he’s likable.  A likable guy.  Yeah.  Okay, fine.  Fine and dandy.  Eight years after Obama’s historic election, 27% see the U.S. as more united as a result.  I’d like to know what they’re smoking.  Twenty-seven percent think it’s more united.  Forty-four percent say the country’s more divided.

How can you think otherwise?  If you watch the news, you can’t help but realize the country’s the most divided it’s been since Lincoln freed the slaves, and that’s the last time I’ve seen the Democrats as mad as they are now.  I mean, I don’t care what the Drive-Bys do. If they try to paint this country as unified and happy and kumbaya, they can’t because it isn’t.  But now we’ve got all these optimism polls coming off, what? Trump’s victory, which equals Obama’s and Hillary’s defeat.

RUSH: Obama’s swan song tonight.  We’ll have that.  I can’t wait for my prediction on that to come true.  I know exactly what it’s gonna be.  (imitating Obama) “You never knew how good I could be because of the filters lying to you about me.  I am the best thing that ever happened to you, but you don’t know, and it’s not my fault.  So screw you.  I’m out.”