RUSH: I just want to show you this picture. I just want to show you this. If you’re not watching on the Dittocam, it’s hard to describe this. (interruption) Hang on. Would you just be patient? What we have here is a deer and a monkey, and the monkey appears to be riding piggybank on the deer in the hindquarters, if you get my drift. (interruption) Uh… (interruption) Well, I’m gonna tell you what this is in just a second. This is a story from the New York Post, and it cleared last night, and I’ve been sitting on it here… 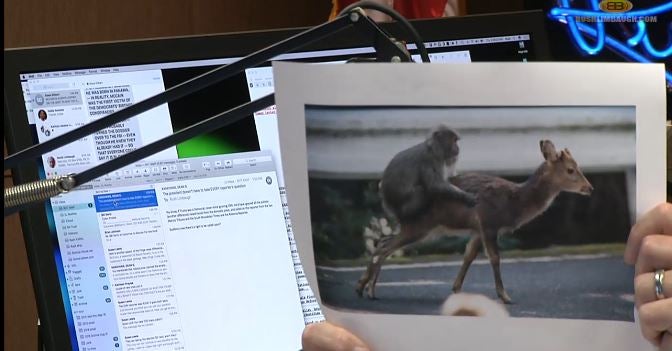 (sputtering) Not literally. Figuratively sitting on it just waiting for the opportune time. It’s still up on the Dittocam for people to make tracks to their web browser, RushLimbaugh.com, because there’s a story accompanying this that (laughing) is mind-boggling. (interruption) Well, I’m gonna get to it in just a second. I’m still holding this. (interruption) I can’t do the story! I’m still holding the picture up so people can study this and form an opinion of what they’re looking at. I’m sorry for those of you that are not watching on the Dittocam and are frustrated. “What the hell is it?” I’ll tell you in a minute. Just be patient. I’m letting the picture soak in for people who can’t see it. Okay, that’s enough. I’m gonna turn the Dittocam off now.

The headline of the story accompanying this picture is, “This Monkey and Deer Have the Hots for Each Other — Two species of completely different animals — a monkey and a deer — were recorded having ‘consensual’ sex for the first time ever, according to a report released Tuesday. In the rare case of inter-species [sex], a Japanese snow monkey and female sika deer were filmed doing the wild thing on Japan’s Yakushima Island. The bizarre friskiness is likely due to ‘mate deprivation’ and sheds some light on bestiality…”

Did you have any doubt that left-wing politics was going to be part of this story, Mr. Snerdley? (interruption) You should have known. Exactly right. You should have known. I’m gonna put the picture back up now that you know the details, okay? Here we go. There’s the picture. What you’re looking at, my friends, is what is said to be “‘consequential’ sex.” That is the keyword here: “‘consensual’ sex” between a monkey and a deer. First time ever, ‘kay? Dittocam turning off.

Would somebody explain to me how they know that this is “consensual”? I don’t care if it is a climate scientist, part of a consensus of other scientists, how can anybody know this is consensual? (interruption) No, they didn’t ask the deer. The deer is not smiling. The monkey is not smiling. There is no outward sign there’s any pleasure going on here. You… I mean, it’s a still shot. There’s no video of this. Yet we are told that this is entirely normal and that it is “‘consensual’ sex.” It is cross-species “‘consensual’ sex.”

And, again, it is because of “mate deprivation.”

For those of you in Rio Linda, what that means is that there aren’t enough deer and monkeys for them to have sex with each other. And because they are deprived of their natural, God-given right to have sex, they have to do it with other species because species of their own are in short supply. The picture “shows the snow monkey … hop on the backs of two female sika deer and try to mount them. One of the deer rejects [the monkey] — and the other goes for it.” Why isn’t this rape? How do they know it’s consensual? (interruption)

Well, okay. “How do they know that it isn’t?” But let’s not deal with proving the negative. Let’s prove the positive. They’re asserting that it’s consensual. How do they know? The animals can’t talk. Do you know animals…? Eh, you always get on thin ice when you start… (interruption) Not this one. This is not Koko the gorilla. Koko the gorilla does sign language, picks NFL playoff games, but, no, no. Not this little monkey. It’s a snow monkey. It’s a Japanese snow monkey. There’s nothing on record of a Japanese snow monkey talking.

“The forbidden love is likely the first recorded case of ‘reproductive interference’ between two very different types of animals — a primate and a cervidae, The U.K. Independent reported. Only one other scientific study on the phenomenon of inter-species sex has ever been published. Two years ago, scientists recorded an [A]ntarctic fur seal having sex with a king penguin. But their hookup was nonconsensual and scientists said the seal had harassed the penguin by not taking no for an answer.” 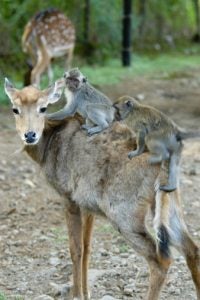 Are you kidding me?

So what do we have here?

The penguin got raped by the seal but the deer consented to sex by the Japanese snow monkey. “The new study notes the deer, which was much larger than the monkey, ‘seemed to accept to be ridden…'” How do they know? Now, you might be asking, Rush, “Why are you…?” It’s because, folks, this is the kind of thing that is going to be… When I tell you that everything in the left is political and when you understand that one of the focal points of the left is to normalize every behavior that many — the majority, most people — think is not normal, this fits the bill.

Why, it’s the animal kingdom — and of course, if the animals do it, it’s all we are. We’re animals. The story even makes a reference here to another characteristic of this story, and that is this: “The bizarre friskiness is likely due to ‘mate deprivation’ and sheds some light on bestiality…” What’s bestiality? Replace the monkey with a guy on this deer and you have bestiality — and I guarantee you, normalizing that, you heard it here first.

You may not hear another thing about this story for I don’t know how long, but the next time something comes up, this is going to be in the file forever in the left, and this is going to be used as evidence of normalcy for other kind of cra… In the meantime, I’m not trying to make a joke. They cannot prove this is consensual. “Consensual” is a human behavioral mode applied to animals in the first place. We can’t ask them! There’s no way to even know what consent is. They don’t even know they…

Do you know that the human being is the only species, as far as we know, that is born knowing its gonna die? That is very, very important when studying the human condition. You know you’re gonna die and yet we don’t cower in fear of it. It’s way, way out. If we live the life expectancy, it’s many, many years. We all know we’re gonna die, and yet it doesn’t destroy our living; it doesn’t destroy our lives. We’re the only species that does this. We’re the only species that actually has an awareness of our existence. Anyway, that’s that.

RUSH: Mr. Snerdley wanted to know if other deer were looking on in either fear or anticipation.  His question is rooted in the fact that one day in Pennsylvania a cow wandered out onto a lake that had been frozen over and fell in, and the farmer went and called somebody got a tractor to bring the apparatus out to hoist the cow out of the frozen lake. And the news account said that other cows were looking on in fear and anticipation for their friend that had fallen in, which is a total crock.  The cows weren’t thinking.  Something fell in the lake.  They didn’t know diddly-squat what had happened.

Anyway, I want to read to you the actual subheadline from the source of this story, which is the U.K. Independent.  The subheadline is:  “Two animals from totally different species found having sex by scientists.  The research could shine a light on why some humans feel sexually attracted to other animals.”

See?  See?  Scientists.  It’s all about paving the way for bestiality.  Some scientists see why it could shine a light on why some humans feel — (interruption) I don’t know whether the monkey bought the deer dinner or not, and I don’t know whether or not other deer were looking on in fear or asking to get in line.  I don’t know if they were like women at the White House press corps during the Clinton administration saying, “Can I be next?”  I don’t know.  We only have the picture of the two, the monkey and the deer in question.  Look, it’s better than what happened to Bambi’s mom so I guess we can look on the bright side.