RUSH: Now, the audio sound bites. The Hillary campaign is in utter denial. You know, folks, I keep hearkening back to things (not to be redundant, not to drive you crazy, but to drill home things I think are important), and one of the relatively new profundities that I have developed and provided you is one of the key elements to understanding liberalism. And it is this: They don’t believe in reality. Liberals are so manufactured and so phony and so artificial, they don’t believe in reality. They think reality is something that majorities create to exclude them, like marriage.

They don’t think there was anything normal or rational or real about it. It was just the majority trying to exclude a bunch of weirdo leftists. This election. Trump did not win. The Russians stole it. The Russians hacked it. The Russians cheated Hillary. They do not accept reality. And, therefore, they can’t live in reality. It’s really important to understand it psychologically. It’s perhaps why there is such a gulf between right and left and why there isn’t any common ground. If you’re dealing with people who simply refuse to accept reality…

You know, reality is what it is. I mean, you can’t… It just is. Sun comes up in the east, it goes down in the west; it just is. But even to them, that can be manufactured or manipulated to their disadvantage. They can control climate change? There’s nothing real about their belief on climate change, nothing at all real, and yet it’s become religious to them, which is key because religions don’t require proof. You see, religions only require faith. So in terms of the election outcome, Trump didn’t win. The Russians cheated Hillary, and Comey was on the Republican side. He investigated Hillary, and all these emails.

The proof of this is the exit polls showing Hillary won. The exit polls show it, the preelection polls show it, the polls all had Hillary winning, and then she loses? So to liberals what is phony? The actual real vote is what’s phony. The preelection polls and the exit polls are real. Let’s go to the audio sound bites and you’ll hear what I’m talking about. CNN this morning, Alisyn Camerota was speaking with Brian Fallon — who, by the way, is still insane. He still has not come to grips. He’s still unhinged over what happened. He was Hillary’s press secretary. She said, “‘What are Hillary Clinton’s people complaining about with respect to the FBI? 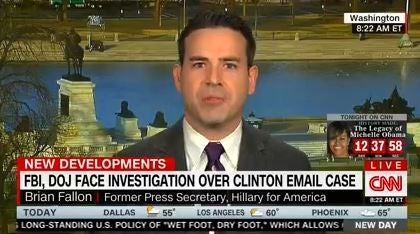 FALLON: Donald Trump is someone who’s very insecure in his victory, and I understand why. Uh, every day there are new developments, uh, new shoes dropping, so to speak, uh, that call into question the legitimacy of his win. First, it was with respect to Russian interference, and with respect to the FBI, uh, we see that Jim Comey’s actions are sufficiently questionable that the internal watchdog at DOJ thinks that they merit an independent review.

FALLON: So I think Donald Trump is just trying to, uh, cling to whatever legitimacy still is in effect here.

RUSH: Are you able to hear that without busting up in laughter? Did you hear the whole thing? I mean, this guy’s telling what he honestly believes. That Trump knows he lost, and he’s clinging to this illegitimate victory by a thread. It’s hanging by a threat and you can see it. Trump knows, he knows that we won he knows that Trump lost and he’s very nervous about it. And the news every day keeps coming out how Hillary actually won because Trump used the Russians to cheat for him. They really believe this.

By the way, it might help, going forward, Trump did tweet a bunch of stuff out at 4:50 a.m. today. I want to read you the tweets. Ten minutes to 5 a.m. Some of the Drive-Bys haven’t even gotten to their own beds yet. Some of them haven’t even left the hotels to go home yet at 10 minutes ’til five in the morning and Trump’s already up at work tweeting things out.

“All of my Cabinet nominee[s] are looking good and doing a great job. I want them to be themselves and express their own thoughts, not mine!”

That’s Trump’s reaction to the media saying Trump’s cabinet picks are betraying him.

Next tweet: “It now turns out that the phony allegations against me were put together by my political opponents and a failed spy afraid of being sued…”

That’s absolutely true. A former spy, MI6, manufactured that entire dossier, and it was spread by the Democrat Party. It was spread by an operative also hired by Planned Parenthood. Trump’s exactly right.

Next Trump tweet: “Totally made up facts by sleazebag political operatives, both Democrats and Republicans – FAKE NEWS! Russia says nothing exists.”

Next tweet: “Probably… released by ‘Intelligence’ even knowing there is no proof, and never will be. My people will have a full report on hacking within 90 days!”

Next tweet: “What are Hillary Clinton’s people complaining about with respect to the F.B.I. Based on the information they had she should never have been allowed to run – guilty as hell. They were VERY nice to her. She lost because she campaigned in the wrong states – no enthusiasm!”

So those are the tweets that Trump sent out at 10 minutes to five this morning that CNN then goes and gets Hillary people to come on and respond. And the first one, that was Fallon responding. And the next one, Alisyn Camerota says, “As we all learn painfully, the polls were wrong during this election. How can you connect what happened 11 days beforehand to a poll the day of?”

FALLON: I actually think the polls were right going into the last week, and then there was an extreme tightening in the last week. But we have gone back and looked and we’ve seen in our qualitative research roughly 40% of everything that was written about and said about Hillary Clinton in the final days of the campaign was about emails. You tell me that there’s such a huge swing in the final week compared to the mood of the electorate heading into that final week given the saturation coverage of Jim Comey’s letter, you can’t tell me that that didn’t have that impact.

RUSH: They’re still insisting the polls were right, that it was Comey and the Russians that somehow swung the election in the last week. Yeah, Comey did it, working with the Russians, and, folks, they really believed it and so does CNN. CNN believes it. The Drive-Bys believe it. They really think they won, that the Russians did indeed steal all of this by working in consort with Comey and the FBI. 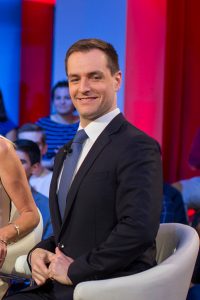 MOOK: The tally is in. Donald Trump is going to be sworn in as our president, and I certainly hope he understands the awesome responsibility that he is taking on, and I think all Americans need to hope and wish that he is going to do a good job and that he is going to act in our collective best interests. That matter is settled. But again, what is not yet settled is what happened, what did the Russians do? Were there connections between the Russians and the Trump campaign or with Mr. Trump himself?

RUSH: They’re not gonna let it go. The Clintons are not conceding defeat. The polls were right, the Russians cheated, they helped Trump, and they’re gonna continue this. The whole objective is to destroy Trump. The whole objective is to undermine Trump’s presidency, his legitimacy. They’re not going away. And don’t forget Obama’s gonna be joining this fray one week from today. Well, he may wait ’til Saturday. He may wait ’til the following Monday.

Let’s take a brief time-out. Robert B. Reich was next up. This was on CNN last night. He actually got so irritated by our buddy Jeffrey Lord. Robert B. Reich so mad he admitted that the goal is to impeach Trump.