So What Did You Think of Homeland?

RUSH: Here is Mike in Holiday, Florida. Mike, so you watched episode 1, season 6 of Homeland last night. What did you think?

CALLER: I was appalled by it. They were… To me, it seemed like expecting and wanting Hillary to win. Even the way her demeanor was, she even appeared to be just like Hillary. I refuse to watch the show anymore. I didn’t watch the whole episode. I turned it off.

RUSH: Oh. How soon into it did you turn it off?

RUSH: Now, wait. Is the only thing that bothered you about it the fact that the president was a woman?

CALLER: No, not that she was a woman. But, to me, she gave the appearance of Hillary, and I am just one of those people that are dead-set against Hillary —

CALLER: — and all that she stands for.

RUSH: Okay, fine. But that, to me, is secondary. They have the character of the president. This season — Homeland season 6 — takes place between the election and inauguration. That’s the time period of this season.

RUSH: So that’s basically two months, and obviously the producers and writers of Homeland thought that Hillary was going to win. So in this season of Homeland the president is a woman portrayed by a marvelous actress by the name of Elizabeth Marvel. Now, yeah, she has characteristics I guess you could say of Hillary. But that isn’t what struck me about this. I can understand Hollywood thinking Hillary was gonna win and then try to have a series related to that. But what about what they’ve done to Carrie Mathison?

RUSH: Okay. Let me put it in perspective for you, then, since you only watched the first half hour. It’s interesting. If the first half hour was enough for you to maybe punch out and watch The Young Pope, or maybe you go over and watch The Affair on Showtime. That’s another show that’s having trouble. That’s gone off the rails this year, too. But that’s another story. Anyway, Homeland focuses on a central character by the name of Carrie Mathison who is a CIA agent. She also has bipolar disorder, post-traumatic stress disorder, PMS.

Everything in the world psychologically that could be wrong with this woman is. Falls in love with the terrorist in the first season, the terrorist who had been turned into a pro-Islamist in captivity in some Middle Eastern country. Probably Iran. I’m not sure which. But an Al-Qaeda-like organization. That was the Damian Lewis character. He’s a great Marine, but he’d been captured and they brought him back to life and they saved him and let him take baths and so forth in the hot and humid weather over there. 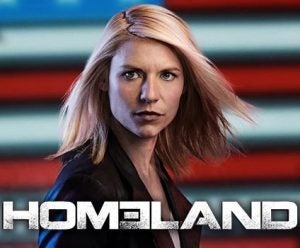 So he became a Muslim and had secret prayers in his garage with the prayer rug and all that. Carrie Mathison was out to get the guy. She was out to get the guy and identify him as a phony as a fake as a fraud. She ends up falling in love with the guy. They end up having a baby in season 3 or 4 and he gets executed in Iran for whatever. Anyway, the point is that she is along with her buddies at the CIA, the number one warrior on the march trying to end militant Islamic terrorism. She is so devoted to it that even her friends at the CIA think she goes too far in that pursuit, that they have to rein her in, that they have to fire her, they have to reassign her.

Because she won’t let go of it.

And that’s what drives the show or has driven it.

But — and I’m sorry, spoiler alert coming up if you don’t want to hear this, if you’ve got it DVR’d and you haven’t watched it yet. She’s now in season 6. The show has returned home to Brooklyn. Last season was in Berlin. She was out chasing bad guys, and she was out chasing militant Islamic terrorists all over. She had joined a foundation that was trying to wipe the world out of the…. Anyway, she now works at (and maybe runs) a center to help people understand Islam and Muslims and that they are not terrorists and that they are unfairly categorized and they’re unfairly pursued.

Here you have her five seasons, this no-holds-barred CIA agent destined to uproot every terrorist in the world and expose ’em, who has now joined forces with people who believe that pursuit is discriminatory and bigoted and racist. So now she runs a place or works at a place that actually helps Islamists — militant Islamists and terrorists — be defended against the charge. And I’m thinking, “This is Homeland? What has happened up here?”

So clearly political correctness and the leftist view of this story finally permeated the writing room at Homeland, and they’ve taken this agent, who’s basically now of the belief that the United States — the CIA — are dead wrong in trying to pursue militant Islamic terrorism, that all they’re doing is discriminating against innocent Muslims. And her job is now to defend them. I said, “Wow. I wonder how the audience is gonna react to this,” and you heard old Mike here. I mean, it was enough to see the way they portrayed the female president for him, and it didn’t register him what happened to the main character of the show.

RUSH, I guess in real life, it would be like John Bolton resigning and working for CAIR.