RUSH: Okay, to the TV show NBC News Dateline. It’s Friday night, NBC. I doubt that too many people saw this so we’re gonna play the audio sound bites. Lester Holt, and he is interviewing Barack Hussein Obama. He said, “Given the recovery was as uneven as it was, the people on the bottom slower to recover than the people on the top, didn’t that in some way plant the seeds for the election of Donald Trump?”

OBAMA: Well, what is true is that the — the ability of Republican leaders to rile up their base — helped along with by folks like Rush Limbaugh, some commentators on Fox News — I think created an environment in which Republican voters would punish Republicans for cooperating with me. That hothouse of back-and-forth argument — and really sharp partisanship — I think has been harmful to the country.

RUSH: Right. Now, Obama came into office January 23, 2009, and had the Congressional Leadership Conference in the White House. You’ve got Boehner and McConnell there and their aides, House and Senate leaders both parties. And Obama said to Boehner and McConnell, “You can’t just listen to Rush Limbaugh and get things done. That’s just not how it happens in Washington.” So he came into office blaming me and telling the Republicans they have to stop listening to me.

As I have mentioned on a couple of previous occasions, I had a meeting with Boehner right here at the EIB Southern Command headquarters a couple of weeks after that, and he was talking about this, and he said, “I can’t believe it. I don’t know why he would do that. I don’t know why he would say that, Rush.” You know, I was kind of dumbfounded. I said, “You really don’t?” “No. Why would he say that?” I said, “Because he was hoping that you, or Mitch, or somebody in your group would go out to that pile of microphones always outside the White House after a meeting with the president.

“And that one of you would agree that there’s a new day and we need to have a new way of looking at things and Rush Limbaugh has been too whatever. He was desperately hoping that you will agree with him! He was trying to marginalize conservative opposition to him.” Another way he acted, is he had dinner with noted conservatives in Washington. It was at the home of George F. Will. Obama chose the conservatives to be there. Naturally, I was not there. They were David Brooks, George Will, Larry Kudlow, Dr. Krauthammer.

It was at this meeting that David Brooks discovered the crease in Obama’s slacks, and that convinced Brooks that Obama’s gonna be great. People said, “Why did he have that dinner?” It’s because what he was trying to do was designate the official conservative leadership in Washington for the media to follow, and he had chosen many of those — not all, but he had chosen many of them — ’cause they had already been solicitous of him and already been open and praiseworthy and complimentary towards him.

So he was trying to eliminate any opposition. It’s kind of a crock here for the guy (chuckles) to blame me for partisanship in Washington. (chuckles) I’m never there. I’m a guy on the radio. Admittedly, a powerful, influential member of the media guy on the radio. But nevertheless I’m not there. But the noteworthy thing here is how he exempts himself from any of the reasons for partisanship: “That hothouse of back-and-forth argument and — and really sharp partisanship I think has been harmful to the country.” See, none of what he did is partisan.

No, no, no! We leftists, we’re not partisan. We are just what “is.” Any opposition to us is what partisanship is. When you have the audacity to disagree with us or to oppose us, that’s what partisanship is. (But he wasn’t through.) Next up, 60 Minutes Sunday night with the go-to interview. Whenever Obama does 60 Minutes, it’s gotta be Steve Kroft. He cut his teeth with the Clintons and showing how it’s done there. So Kroft says, “You had two of the most unpopular presidential candidates selected by the two parties in history, Trump and Hillary. Doesn’t that say something serious is wrong with the system?”

Now, think of that question. Here’s Obama, the greatest ever. The only thing Michelle did was fashion. Obama himself can’t hold a candle to that. But aside from that, Obama redefined the presidency better than anybody ever since. He’s the greatest, smartest, cleanest guy to ever be president! Brilliant, articulate, greatest guy ever. And then Kroft says (paraphrased), “I mean, this country, the Nimrods in this country nominated Hillary and Trump, for crying out loud! We in the Hamptons, we were so embarrassed, Mr. President. What about you? Doesn’t it say something’s seriously wrong with our system that these two dolts happen to be nominated?”

OBAMA: — fake news to negative advertising has made people lack confidence in a lot of our existing institutions. I think it indicates, at least on the Democratic side, that we’ve got more work to do to strengthen our grassroots networks.

RUSH: You blew that up yourself.

OBAMA: The Tea Party, I have huge disagreements with, obviously. But I give ’em credit for having activated themselves, and they made a difference in terms of moving the Republican Party, and in terms of moving the country in a particular direction. It’s a direction I disagreed with. But it showed that, in fact, you get involved, if your voice is heard, it has an impact.

RUSH: Pete Hegseth was on Fox & Friends Weekend. He was hosting over the weekend and they were talking about Obama’s criticism of me for the lack of bipartisanship in Washington. The lack of cooperation, the lack of Republicans helping Obama accomplish his socialist agenda was my fault. I think, in truth, I should be applauded and credited if I’m indeed responsible for this. If I’m the reason the Republicans didn’t cooperate, give me the Medal of Freedom or whatever it is. Anyway, Hegseth was on Fox. (chuckles) He was explaining what this is really all about. 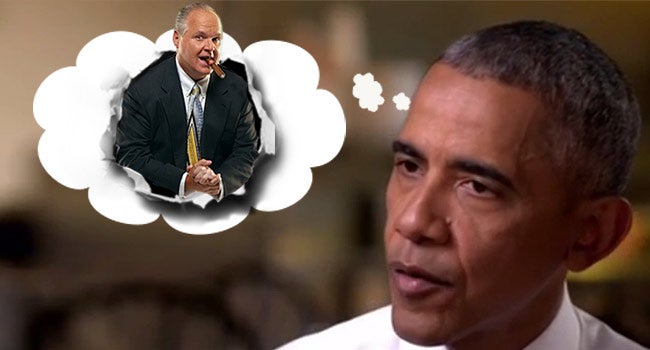 HEGSETH: It’s a total double standard. He can bash Fox and Rush all he wants but when CNN gets one finger pointing after eight years of complete bias, suddenly everyone runs to their defense. I mean, the reality is they’re pining for the good old days when Walter Cronkite gave everyone the balanced news and it was unbiased. And the New York Times — which is now aptly dubbed “the failing New York Times” — told us all what to believe. It’s a new media environment. You can get your media where you want. Media outlets compete, and he can’t deal with that.

RUSH: This is correctamente. What Hegseth is saying here is, the reason they’re really upset is I came along and busted up their monopoly. You even hear Obama refer to it! He says (impression), “You know, in the old days when we all had the same facts, uhhh, and the same information, and we could all come to a decision and agreement based on the same set of facts, the same news…” Exactly right. When it was all what the left thought, when it was a monopoly — ABC, CBS, NBC, PBS, New York Times, Washington Post, USA Today, LA Times, you name it — it was all identical.”

And then Fox News came along in 1996, and they don’t have their monopoly anymore.