RUSH: Okay, folks. I shot a 76 yesterday. I shot a first. I think it’s the first time I broke 80. I shot a 76, and that was a double bogey on the 18th hole. It could have been a 74. And, you know, I don’t keep score when I’m playing. Other people do. So I didn’t know, and they didn’t tell me. It was kind of like when the pitcher’s throwing a no-hitter nobody talks about it on the bench between innings. And when I muffed a chip shot on the 18th hole on my third shot I could see the wind go out of everybody else’s sails like it was affecting them. 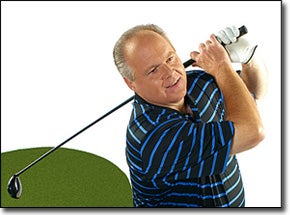 “What’s going on?” And they didn’t tell me ’til I finished. You know what? It was a learning experience. It felt effortless. This was the most… I had confidence standing over every shot, and it just felt effortless, which is how it’s supposed to feel. Just… You know, everything with me is a learning experience, and golf — most of it takes place between the ears, actually — and yesterday was evidence of it. And then the Steelers. Everybody’s all excited. Steelers fans are all excited about Steelers winning. But I’m gonna tell you something, folks: If they don’t stop this prevent offense…

Its exactly what I mean. The Steelers have not scored a touchdown since the first half, I think, of the Miami Dolphins game last Sunday. They didn’t score a touchdown yesterday. Their defense is just playing lights out. Six field goals! That’s not gonna do it against the New England Patriots. It’s like they get a lead and they start running out the clock in the second quarter. So Antonio Brown has his hundred yards plus receiving, Le’Veon Bell with 170 yards rushing and no touchdowns. And thank goodness for their defense because…

You know, prevent defense is where you give the other team whatever you want but you keep the end zone. You stay back, don’t give up the big play, unless you are playing the Packers and you let the Packers offensive guys get behind you in the end zone. But the point is you give up but you don’t give up. The prevent offense is like you don’t want to score, you just want to run out the clock and keep the other team from getting the ball. But you don’t start running out the score, playing out the score in the second quarter! 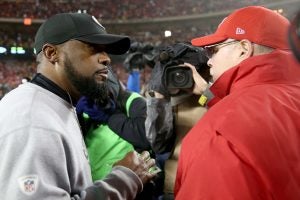 I mean, I don’t get mad watching football teams much. I get frustrated when the team loses. But I was getting mad last night watching this stuff in Kansas City. Thank goodness for Andy Reid. Guy comes through every time you need him. Chiefs had no timeouts in the last minute of the game ’cause he burned ’em all. So it all works out. But this kind of football, the way they’ve been playing… They don’t intend to, don’t misunderstand. But you can’t go into New England and kick six field goals and expect to win no matter how great your defense is.

RUSH: (interruption) What’s that?  (interruption) Oh, yeah, yeah, yeah. I saw that.  Antonio Brown’s video from the Steelers locker room last night at “Airhead” Stadium.  Yeah, yeah, yeah.  Antonio Brown grabs his phone, shoots a 15-minute video, and then he put it on Facebook.  You know, after the coaching staff says, “Let’s keep it in the locker room. Let’s be real careful on the social media. Let’s keep it in the house,” Antonio Brown tapes this thing and puts it out there.  No big deal except Mike Tomlin, the head coach of the Steelers, in the postgame remarks to the team said…

Well, he called the Patriots, their next opponent, “rectal orifices.”  He said (paraphrased), “We’re gonna handle those (rectal orifices), and I’ll tell you what, those (rectal orifices) got a day and a half spotted on us. They played a day early! Our game was late and delayed but we’re gonna be ready for these (rectal orifices),” and that’s out there.  That made it outside the locker room thanks to Antonio Brown’s video.  (laughing) They were happy.  You know, they’re in there celebrating, and they’re happy. There are two things in the voice… Tomlin is not seen; it’s just his voice.  And there’s another voice warning Antonio Brown, “Don’t take this outside the locker room.”

So, what does he do?

RUSH: I alluded earlier in the program to a video taken by number 84, the wide receiver for the Pittsburgh Steelers, Antonio Brown, in the Steelers locker room postgame. It was a 15-minute video, and it was a madhouse in there.  The Steelers beat the Kansas City Chiefs last night at “Airhead” Stadium, and this videotape was posted on Antonio Brown’s Facebook page, which means it got massive numbers of views.  In fact, Antonio Brown, while taping the video, was being advised of how many views the video had.

The count was mounting up and he was excited about it.  We’ve had to bleep it because it’s of Mike Tomlin here addressing the team after they beat the Chiefs last night, and what’s interesting is that the Steelers players were told, “Keep it in the locker room.” Don’t put anything out there the Patriots could post on their bulletin board. Don’t fire ’em up, don’t motivate ’em. Just keep it in house. (chuckling)  So Antonio Brown is taping what’s going on in there, is videoing it on his phone.  Tomlin is not seen, but his voice was heard, the head coach addressing the team.  And here’s a part of it…

TOMLIN:  (locker room noise) When you get to this point in the journey, man, not a lot needs to be said. Let’s say very little moving forward. Let’s start our preparations.

TOMLIN: We even spotted those (bleeped)holes a day and a half.

TOMLIN: They played yesterday; our game got moved to tonight. We gonna touch down at 4 o’clock in the f(bleeped)ing morning. So be it. We’ll be ready for their ass. But you ain’t got to tell em we comin’, because some of you (crosstalk) here might not like the damn (unintelligible) and sh(bleeped). The check signing, right? Keep a low profile. Let’s get ready to ball our fists up again here in a few days and be right back at it.

RUSH:  “Keep a low profile. Let’s get ready to ball our fists up again here in a few days and be right back at it.” (laughing) Antonio Brown’s put that out all over Facebook.  What Tomlin is saying here is we spotted those “rectal orifices” a day and a half, meaning Patriots played Saturday and the Steelers played Sunday night. So the Patriots — the “rectal orifices” — had a day-and-a-half head start in preparation on the Steelers.  And he was alluding the fact the Steelers plane would not get back to Pittsburgh ’til four o’clock in the morning after the game last night.

He said, “So be it! We’ll be ready for their ass.” (laughing)  He’s telling ’em, “Don’t… (laughing) Don’t… Just keep it in house, right?  Keep it in house. Keep a low profile,” and the whole thing’s out on Facebook! (laughing)  And there’s even more.  There’s another bite here.  We don’t know who this is. It’s an unidentified person in the locker room, sound bite 21, and it’s somebody. While Antonio Brown is actually videoing what’s going on, somebody says this to him…

MAN #1: (locker room noise) Be cool on social media, man! This is about us, nobody else, man.

RUSH:  I wish I could repeat to you what we bleeped.  So somebody in there is telling the players, “All right, be cool on social media, man! This is about us. Nobody else,” and somebody else basically says, “(Raspberry) that!”  It might have been Antonio Brown. Who knows?  I wonder. I wonder. You know, Antonio Brown one time after scoring a touchdown in Pittsburgh, actually ran through the end zone and jumped on the goalpost.  Do you remember this?  And straddled the goalpost.

Remember that?  And it looked suggestive.  And the media said to Tomlin, “Are you gonna have a talk with him about that?” And Tomlin said, “He’s a grown man, man.  What am I gonna say?  He’s a grown man.  I can’t tell these guys how to behave.”  I wonder if Tomlin is going to have a conversation about the video.  The video is just, basically, Antonio Brown staring in the camera admiring himself, and other players coming in and war whooping it up.