Putin: Russian Prostitutes Are Best in the World, But Even They Can’t Hold a Candle to the Democrats Attacking Trump

RUSH: Have you heard what Putin has said about Trump? This is hilarious, folks. The American left and John McCain are going to go nuts over this. This happened this morning in Moscow. Vladimir Putin held a joint press conference with the president of Moldova.

His name is Igor Dodon, and, during the Q&A, reporter said, “You couldn’t make any comments on reports that we’ve been gathering compromising materials on U.S. President Trump supposedly about his meetings with hookers in Moscow hotels. So have you seen those videos, Mr. Putin? Do you know anything about prostitutes in Moscow hotels to help Trump? People in the U.S. want to know. Tell us, Mr. Putin, what do you have to say about this?”

PUTIN (via translator): When Trump came to Moscow, I don’t even remember when it happened, actually. He wasn’t a political actor. We didn’t know whether he had any political ambitions. You think that our intelligence are pursuing each and every billionaire? No. That is absolutely not true. And he’s a mature man. He’s an adult already. So, all his life, many years, he’s been organizing beauty contests, in conversation and many meetings with beautiful women around the world. So I cannot imagine that he decided to go to some hotel to meet Russian… Well, girls with special responsibilities being at the lowest. But they [are] also the best in the world, I’m sure.

RUSH: (laughing) Did you understand what that is? This is classic! (laughing) Vladimir Putin just said (paraphrased), “I don’t know if Trump hired prostitutes, but if he did he got the best in the world because we got the best prostitutes in the world here in Moscow. (laughing) There’s nobody does golden showers like Moscow prostitutes.” (laughing) Who does it remind you of? (laughing) He said (impression), ‘That is absolutely not true. Trump is a mature man, he’s an adult already, and spent many years organizing beauty contests in conversation and many meetings with beautiful women around the world. 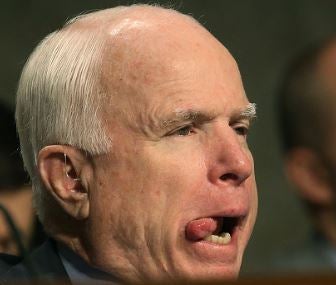 “So I cannot imagine that he decided to go to some hotel to meet Russian… well, girls with social responsibilities. I mean, can’t believe he would go to hotel to meet Russian prostitutes, but if he did, they are the best in the world.” (laughing) So why wouldn’t he…? Can you imagine the American left and McCain chewing their cud on this? And Putin then continued by making a comparison between the best prostitutes in Russia to what he’s seeing in the U.S.

PUTIN: Those people who want to organize such frauds, which have been circulated and promoted against the newly elected president of the United States — who fabricate such frauds and use these in their political fight — they’re worse than prostitutes. They have no moral limits.

RUSH: So Putin has just said that prostitutes in Moscow are better than any in the world, but they can’t even hold a candle to the prostitutes in the United States (i.e., Democrat politicians) trying to undermine Trump. Oh, man! You know, it’s so much fun. The news each and every day here is so much fun.

RUSH: Here’s Darlene in Anthem, Arizona.  Great to have you on the program.  Hi.

CALLER:  Longtime listener.  Talked to you in the early nineties, and thanks for the last 25 years.

CALLER:  All right.  Well, my question today is: What do you think of John McCain?  A sitting U.S. senator who committed what I consider an act of subterfuge in order to try to bring down a president-elect.

RUSH:  You want to know what I think of McCain?

CALLER:  Well, yeah, and the action he took.  He didn’t just hear about this dossier.  He actually sent a congressional aide out of this country into another country to pick up this dossier.

RUSH:  Right.  He sent a guy on a jet across the Atlantic to pick it up in December and then he gave it to James Comey, and he found out after that that Comey already had it.  I mean, McCain was late to the game here.  This dossier has been floating around Washington for 15 months, and nobody did a thing with it because nothing in it is verifiable.  Nothing in it is provable.  And believe you me, the media and the Democrats have been looking under every rock they can find for evidence that there’s anything to this.

RUSH: One sound bite before we go to the break, and it is McCain.  He’s on Fox last night, and the question… I don’t know what the question.  Here’s what McCain said.  He was basically asked about this, and here’s his answer…

MCCAIN:  You know, Martha, I received that information from a credible source, and I thought the only thing for me to do would be to give it to the FBI.  If I had sat on that information and done nothing, I think it would have been a breach of my oath of office.  So I gave it to the director of the FBI because I thought it was important to get into the right hands.  And, by the way, obviously the intelligence people felt that that was important information because they briefed the president-elect about these allegations.

RUSH:  That is a flat-out falsehood.  That is not what happened.  They did not brief Trump.  They wanted to show Trump the kind of garbage that’s out there.  Trump was saying he doesn’t need a daily intelligence briefing.  Well, these people want to be important.  These people want to be relevant. So they’re out there trying to convince Trump, “Yeah, you need to talk to us every day. You need to get an intel briefing every day.”  So they had a meeting with him and they said, “Look, this is why.  This is the kind of garbage that’s out there on you, and we think you need to know this kind of stuff.”

McCain knows better than this.  Trump was not briefed on this as actual intel.  In other words, what McCain wants you to believe is that the intel community brought Trump in and said, “Look what they have discovered about you.  They’ve discovered you hired prostitutes to urinate on a bed at the Ritz-Carlton in Moscow because Obama and Michelle had slept on it!”  That’s not what happened.  Comey already had this dossier.

McCain said, “I received from credible source…”  You received it from a credible source?  He received it from… Oh, I had this last week and I’m having a mental block on it.  Anyway, McCain sends somebody over to the U.K. after somebody tells him about this thing. He actually sends an aide on a jet to the U.K. to get a copy of it and bring it back and then give it to Comey.  This is… Everybody is in CYA mode on this now.