Get Used to Checking “Just In From Rush”

RUSH: We have a redesigned website, ladies and gentlemen, and one of the new features at RushLimbaugh.com is up there at the top of the home page, “Just In From Rush.” This is where I do the equivalent of tweeting, but not limited by 140 characters, and I have posted three separate things there between last night and now. 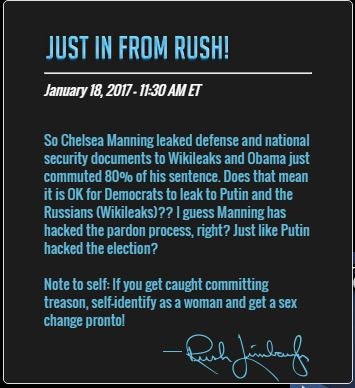 One was this Chelsea Manning circumstance. The other two — and of course, this mandated and required that I talk about these in great detail on the program. This is fun, folks, because it gives you a little heads-up on what’s coming and it also allows me to give you a little advance preview of what’s on my mind and what I think about it, and all you have to do is periodically check in at RushLimbaugh.com and see. It’s totally dictated by two things: Fast-developing news and what I care about. I mean, there may be times where there aren’t any updates to “Just In From Rush.” You never know.

But today was busy, and the other two were, a totally fake news story about Tom Price. Tom Price, Health and Human Services nominee of Donald Trump. He is one of the finest people in Congress, one of the finest members in terms of character. He’s right up there with Ben Carson. He’s a doctor. He’s got massively great plans in remodeling health care in America. CNN read a fake story. They ran totally fake news that this man, Tom Price, was out buying stock in businesses that he was writing legislation for that would improve these businesses. 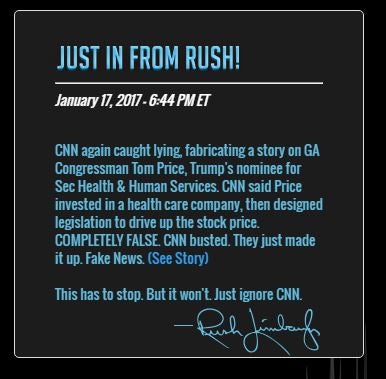 This is just a flat-out lie. It’s just a flat-out fake news story, but it’s already made it into the mainstream. Seth Meyers, late-night TV last night, joking about it. CNN is talking about it as though it actually happened. It didn’t! It’s just pure, plain, fake news. It did not happen. It’s totally made up. Trump has demanded that they retract it. Details here coming up in a second. But they continue to run with this. And Patty Murray, one of the senators on the committee that’s doing the confirmation hearings for Tom Price, even asked him about it as though it’s real.

And this is the old saw, you know, a lie gets halfway around the world before the truth even puts its pants on. And I don’t know who said that. People attribute that to Churchill, but it might have been Genghis Khan. I have no idea who said it. It doesn’t matter; it’s true. The other thing that I saw last night… I could not believe this. Actually, I believe it. Does the name Thom Tillis ring a bell? Do you know who Thom Tillis is? I know it rings a bell. Thom Tillis is a Republican senator from North Carolina. 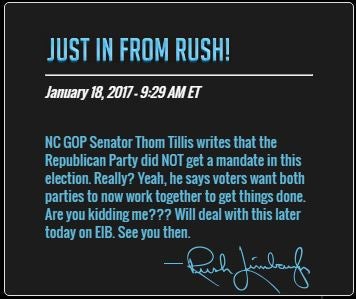 And Thom Tillis wrote a piece for a newspaper in North Carolina in which he said that the Republicans didn’t win any kind of a mandate in the recent election. There was no mandate. No, no, no, no! What the voters wanted, as expressed by their votes, was Democrats and Republicans to work together in Washington. Now, you might say, “Rush, why are you even worried about that? It’s an oddball, kooky, one-off senator.” That’s not how this works. The problem is something like this can get picked up by media, by the Democrats, and it’s attributable to a Republican.

Do you realize what a gold mine something like this is for the media, when a Republican senator proclaims that the (chuckles) Republican Party has no mandate? That means they don’t have to allege it. They don’t have to put it in the words of John Lewis or any other Democrat. They can quote a Republican senator, Thom Tillis. “Hey, the Republicans even admit they’ve got no mandate!” It’s a direct undercut of Trump and his election victory and why he won and his agenda. It’s not gonna stop Trump; don’t misunderstand. It’s just another media obstacle.

RUSH: We’re working on something, folks.  I have mentioned that these are my version of tweeting without using Twitter ’cause it’s exclusive to you.  You know, I want to maintain the exclusive and great relationship that I have with you, and so all these things are available at RushLimbaugh.com in our really redesigned website.  One of the features is “Just In From Rush” and it is a little place at the top of the homepage where I will post occasional thoughts on things that I see happening out there that I don’t want to wait until the next day’s show to address.

So since last night there have been three different things I’ve posted, but the design is for only one to display at a time, and if you miss any, you miss ’em; you can’t get ’em.  But I mentioned to you that this is a work-in-progress rollout, and we’re modifying and addending the website as we roll it out.  And I made a design decision.  I just told Koko, “Look, we need to create a link where people can go back and look at previous posts of ‘Just In From Rush.'” And we’re working on that now.

These things are not as simple as it may seem like, to get it to work each and every time people click on it. But we’re working on this to make it happen because, hey, look, we need to preserve them for the historical record anyway, and, if I’m gonna be talking about them here, you may as well have a method of going back and look at those that you’ve missed — and, believe me, they’re all pithy.  You’re gonna want to be able to access them at all times to be able to remind yourself what you’ve read so that you can then pass it on and share it with others as your own opinion.

So I’ll let you know when we get that aspect added to it.

I’m not… Look, I’m not gonna guarantee it.  I don’t guarantee anything that I’m not personally doing.  And you never know what kind of obstacles you can possibly run into. But I don’t think there’s much to this.  So, if you’ve missed one, for example, we can only post one at a time. That’s wait it’s… ‘Cause we don’t want the whole home page to be nothing but posts by me.  We don’t want this feature to obscure the rest of the page, which it would if we just kept adding.  So we’ve got the design decision for just one “Just In From Rush” post at a time and we’re gonna set up a link to previous posts.