RUSH: Here is Lloyd in Shoreline, Washington.  Hi, Lloyd.  Great to have you here.

CALLER:  Hey, how you doing, Rush?

CALLER:  I was listening to you yesterday talking about John Lewis, and it occurred to me that a lot of black people think — being black myself — that there’s no way that somebody of color will sell them out.  You know, it’s just not true.  You know, Obama, he did a great job of selling out black people during his eight years.  He did nothing. Zero.  And, yet, we still want to automatically go —

RUSH:  You know, he didn’t.  It’s a good point.  Let me ask you something, Lloyd.  Let me take advantage of you being here and ask you a question.  What did, in your opinion, African-Americans expect from Obama?  What…? It’s clear… You said he didn’t do anything for them.

RUSH: But what was the expectation in black community? What was Obama supposed to do?

CALLER:  I believe that especially older blacks who’d been through the civil rights movement and everything, that they saw hope. They saw that here’s the guy that’s really gonna help us. You know, he’s really gonna, you know, turn things around for us. He’s —

CALLER:  As far as what?  Black people, what do we want?

RUSH:  We ended slavery, we did the Voting Rights Act, we did the Civil Rights Act of 1964, we’ve got affirmative action.  What is there to do? 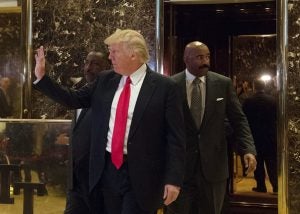 CALLER: I think that was part of it, too.

CALLER:  Right.  It’s just like that.  It’s like, I was raised to vote Democrat, without question.  When I got old enough to be a critical thinker, I looked at it and I said, “Hey, no way, man! I’m not for abortion. I’m not for this,” and then when you look at the history of these racist Democrats, Jefferson Davis being their first president, right?

RUSH:  No way you wanted to be saddled with everything being a Democrat means just because you are black and have to show loyalty.

CALLER:  Right. And, you know, and then you saw. Now I’m a sellout and I’m also an Uncle Tom.

RUSH:  Well, you’ve got — you’ve got some august company.  You’ve got Clarence Thomas, you’ve got Shelby Steele, there’s a number of other Uncle Toms out there that are very highly achieved people that are considered sellouts.  You know what I think the biggest — and it’s hard to put something at the top of this list.  But I think — and I spoke about it earlier this week using a column written by Shelby Steele, in fact. I think one of the greatest disservices that the Democrat Party has done to its core black supporters is what I call “the soft bigotry of low expectations.”

I think it’s the Democrat Party who believes that black people can’t achieve on their own.  For whatever reason. Be it racism, be it the history of slavery, be it Republicans, it doesn’t matter. The Democrats have got an entire portion of the population of this country believing that they can’t do anything on their own.  That is destructive!  That’s insulting.  And it’s the soft bigotry of low expectations.  There’s no expectation that African-Americans are gonna do well for whatever reason. The deck’s stacked against them or they’re incompetent or there’s lingering racism.

But at the end it all, the way you finish the sentence is, “There’s no way you’re gonna amount to anything unless you vote for us — and if you vote for us, we’re gonna clear the path. We’re gonna get everything out of your way.”  And yet for 50 years these voters have been complaining about the same things.  Democrat-run cities look like Third World nations!  Democrat-run cities in some places look like war zones.  What is the Democrat Party doing?  Not just for African-Americans, but for any of their other constituencies, but creating permanent dependency on ’em and then saddling them with low expectations based on sympathy or whatever it is.

They’re not doing anything for anybody other than ostensibly protecting them.  “Yeah, protecting them from racist Republicans!  Yeah, that’s what’s happening. That’s what they’re doing.  They got a cloak of protection around every minority, making sure that the evil majority doesn’t get in there and do harm to ’em.”  It’s perverted.  Let me give you an example.  How many of you know the television personality Steve Harvey.  You know Steve Harvey?  Do you have an opinion on Steve Harvey one way or the other? (interruption)

Yeah?  Is it thumbs up or thumbs down?  It doesn’t matter.  (interruption) All right.  Well, Steve Harvey, he hosts game shows on TV.  He’s been a syndicated radio host and may still be.  He happened to visit Trump yesterday.  He went to Trump Tower, and Trump escorted him down the elevators and into the lobby of Trump Tower.  And he was there with… Was it Jim Brown that he was also with yesterday?  (interruption) Yeah, but there was somebody. (interruption)  Oh, maybe it was early in the week.

But there was somebody else with Steve Harvey.  He was with two guys. It doesn’t matter.  I’m just trying to complete the picture.  Well, Marc Lamont Hill, who is a professor. He’s a liberal professor, and he hopscotches from one liberal university to the next teaching racism and slavery studies and whatever else it is.  And he was just offended as all get out when he saw Steve Harvey had gone to Trump Tower and Steve Harvey was escorted by Trump down the elevators in the lobby of Trump Tower, and he said that Steve Harvey is “a mediocre Negro.”

And Marc Lamont Hill then launched a salvo into any and all African-Americans supporting Trump.  He says he likes Harvey. (snorts) Really?  He likes him, likes Harvey, understands his motives, he “wishes the Family Feud host had brought experts on race issues with him” so as to be able to tell Trump the truth about it. But he “decried Harvey’s recent visit as demeaning, disrespectful, and condescending for Trump to meet with comedians and actors, “mediocre Negroes” to talk about black issues. So you see, Steve Harvey, he’s not qualified to talk with Trump about African-Americans.

Why is that?  Steve Harvey is a success story, is he not?  Steve Harvey’s been a success in a lot of things he’s done.  Why is he not qualified?  Could it be that he’s a success and that’s why?  I have no idea what Steve Harvey’s politics are, folks.  It doesn’t matter to me.  It’s not relevant here.  Steve Harvey is called “a mediocre Negro” by Marc Lamont Hill, a favorite African-American of the American left, by the way, and he is of the left. But he gets upset, and he’s upset at Jim Brown.

Jim Brown’s selling out African-Americans, and Marc Lamont Hill thinks that Steve Harvey is being dim-witted and unwitted by Trump. He’s being used.  It’s the soft bigotry of low expectations.  And then when you have genuine success stories — people who’ve made it on their own, with help, whatever — you can’t have them in the picture. It doesn’t present an accurate picture of the African-American experience to have Trump standing next to anybody who’s successful.  It’s just… Somehow undermines the cause?  That’s crazy.