The Pardon Process Has Been Hacked!

RUSH: So I guess it’s safe to say that Putin has hacked the pardon process. I mean, how else would you explain it? This Manning clown, used to be Bradley Manning, now — not Peyton, what is it? Chelsea, now Chelsea Manning — committed treason, leaked a bunch of Defense Department and military documents to WikiLeaks, the dreaded WikiLeaks, and he was sent to prison for treason. Obama just commuted his sentences. He’s only gonna serve 80% of it. So now what it means is that this guy who gave our private documents to the dreaded WikiLeaks, which everybody knows now is Putin who hacked the election.

I guess it’s safe to say now that Putin has hacked the pardon process, and even some of the Drive-Bys are worried about the apparent conflict here. Because on one hand you have Obama joining the chorus of people claiming the Russians hacked the election because of their association with WikiLeaks and Julian Assange. And yet here is Obama pardoning somebody who committed treason using WikiLeaks and Putin, and it makes it look like — as far as Obama’s concerned — it’s okay if an American soldier leaks documents to WikiLeaks that end up in Russia.

That’s fine! No problem with that. But if those same Russians hack our election and cause Democrats to lose, well, we can’t have that. Some in the media here worried about this, trying to understand it. We, as you know, make the complex understandable here at the union EIB Network, and that’s what we’ll do.

RUSH: This Chelsea Manning here, who used to be Bradley Manning — obviously a confused individual.  I guess what it means now, ladies and gentlemen, is that it’s okay to leak confidential information to WikiLeaks.  This is what this clown did.  In fact, this is how WikiLeaks came to fame.  This how. I mean, WikiLeaks had been there and doing what they do on a small-scale basis. But here came then, Bradley Manning, a very confused and angry member of the U.S. military and who had become a good liberal by becoming convinced the United States was the problem in the world.

So he stole a bunch of military documents, defense department documents, government military secrets, and he gave them to Julian Assange at WikiLeaks.  And Obama just commuted his sentence!  Obama just pardoned a guy who committed treason by giving a bunch of data to WikiLeaks, which I guess now it’s okay to have confidential information leaked to WikiLeaks.  I guess it’s perfectly fine to have WikiLeaks involved in the American judicial process.

RUSH: Okay, since I’ve talked about it, this is gonna be a sound bite here on this Manning business. The Drive-Bys having trouble understandings why Obama would side with Assange on Manning and why he would pardon Manning, because that pardons WikiLeaks and the fact they love WikiLeaks, but of course WikiLeaks is a big enemy number one now.  So we have a montage of people from CNN and a couple other places on this.  Give a listen… 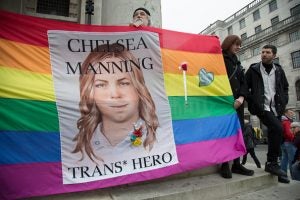 MARK PRESTON: (outdoor noise) It’s just a very bizarre situation that we’re in right now.  Democrats, who are the law-and-order party, political party when it comes to the Russians, the Republicans, when it comes to Chelsea Manning. Very bizarre.

SARA MURRAY: (outdoor noise) This is a person who is not liked by many Democrats.

GLORIA BORGER:  (outdoor noise) It’s quite controversial.  A hard case for the president to make.

EVAN PEREZ:  The Obama administration has made a big deal of the fact that the WikiLeaks served as an arm of the Russian intelligence services, which stole documents from Democrats and then released them through WikiLeaks in order to harm the campaign of Hillary Clinton.  A lot of people were surprised by this decision.

GLENN GREENWALD:  Six years later, everything is pretty much reversed.  Democrats almost universally despise WikiLeaks, uh, and view Julian Assange as a traitor.  There’s a lot of support on the right now for WikiLeaks.

RUSH:  I wouldn’t call it support on the right for WikiLeaks.  The left is the focus here because all of these people in the media are exactly right; their heads are spinning.  Because they have been conditioned, over the last year and a half, to hate WikiLeaks, to hate Julian Assange, to link him with Putin as agents of defeat for Hillary Clinton.  But you go back, WikiLeaks used to be a hero!  Assange was a hero, because they made it possible for this Manning character to leak American secrets, and they celebrated it all.

The bottom line is I guess it’s okay to leak confidential information damaging to the United States to WikiLeaks. (phone ringing) Because we’ve pardoned the guy who did it.  (ringing) And in the same process, we’ve sort of pardoned Assange, and… (ringing) Let me… Hang on.  Let me decline that. (ringing) It’s a wrong number.  Nobody ever calls me.  And then on the other side of this we would have to say that this guy WikiLeaks has now hacked the pardon process.  I love it.  I absolutely love all this.