RUSH: The Daily Caller. Let’s review some media here before we get to the sound bites. Daily Caller: “Chuck Schumer Drowns in Boos at Trump’s Inauguration — Senate Minority Leader Chuck Schumer faced a sea of disapproval during his speech at President Donald Trump’s inauguration. He was repeatedly booed, especially after lines like, ‘I stand here today confident in this great country for one reason: you, the American people.'” 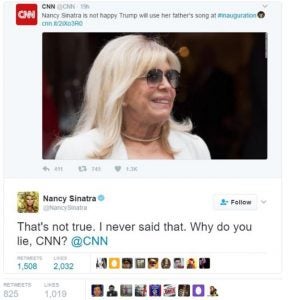 Do you realize that way, way out there when Hillary walked in there were cheers of “lock her up” you could hear?  Way, way out there.  They weren’t anywhere near the stage area.  “Lock her up!” In fact, you know what? Caveat, caveat. I didn’t hear them, either.  It’s been reported.  Let me retract that.  I don’t really know that that happened.  It’d be something classic the Drive-Bys are reporting that happened that didn’t, like this.  CNN. Fake news again! CNN runs a story that Nancy Sinatra is offended and outraged that Trump is going to play her dad’s song My Way, that it is gonna be played at Trump’s inauguration.

CNN reports Nancy Sinatra is livid about it. Nancy Sinatra tweeted (summarized), “I don’t care. I never said that! Why would CNN lie about it?”  CNN is fast becoming known as the headquarters of fake news.  You know they’ve even hired somebody to be in charge of fake news?  Well, they did, they hired someone. It’s somebody to be on the lookout for fake news, not somebody to disseminate it. But, I mean, they’ve already got that covered.  They’ve got the dissemination of fake news covered.  It’s a… (interruption) That’s right, they hired Valerie Jarrett’s daughter. Well, you gotta keep the communist presence even after Obama leaves.  So CNN has become the agent of that.