RUSH: Give me line 1. I think this is a very important point to make. I have been making this point ever since the election. This is a crucial point to make especially today because the riots are underway. The malcontents and the rent-a-mobs — the paid protesters — are getting very near the parade route, and the SWAT teams and riot teams have been called out. And, you know, I have two minds on this. Obviously, you don’t want the civil unrest and the danger that it poses.

On the other hand, let these people show everybody who they are. Because the fact of the matter is, folks, these are the obscure minorities that Barack Obama tried to turn this country over to. The transformation of this country was specifically aimed at… I want to be very careful here. I mean this seriously, but I don’t want to be unnecessarily incendiary. You know, it’s not enough to say that Obama and the Democrats were attempting to transform this country away from the values, institutions, traditions, and people who founded it.

But they were, and they truly believe that since the founding of the country there have been victims of this country because of the founding. And they have built up that idea, and they have fomented it, and they have inspired people to feel like victims and join groups as victims. To be malcontents and unhappy and miserable on the basis that this country is a rotten place and is unfair and discriminatory. And it’s this bunch of people that Obama and the Democrats have been trying to make a majority coalition out of. 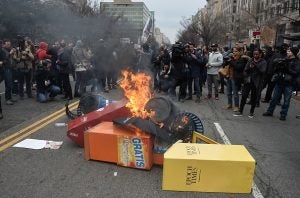 And they miscalculated totally because these people all together can’t even approach a majority. But for eight years the media did their best along with the Democrats to make it look like this bunch of malcontents was indeed the majority. How many of you, in casual conversations the last eight years with people, seriously discussed the prospect of, “Have we lost our country?” because of the daily presentation in the media and the president of the United States being devoted to this coalition of minority groups.

I can tell you that I was fearful that we had lost the country, and I know a lot of other people — I imagine you to — based on how it looked. We’re sitting here, “How in the hell has this happened? How has…? It’s a coalition of these people who make up 1% of the population here, one half of one-tenth of 1% of the population over there. How in the world have these people become the majority?” And we said, “Well, they run education, they run Hollywood, they run pop culture,” and so we talked ourselves into believing. But they aren’t. And the truth is, they’re not close.

They’re closer than we would like, but we were never near the tipping point.

But look how successfully they made it look like we had lost the country, and it was worse than that. Not that we had lost the country but that we were the problem in the country. And I’m telling you, this Trump inauguration starting last night is a reclamation project, reclaiming this country from the people the Democrat Party has been attempting to turn it over to and transform it to. And I got a caller who wants to address it. It’s Dave in Star Valley out in Wyoming. Dave, I hope I didn’t steal too much of your thunder there, but I know that’s what you want to talk about. How you doing?

CALLER: Oh, I’m doing great. Thanks, Rush. This is an honor and it’s humbling to talk to you. I grew up listening to you on the job site and I appreciate this opportunity.

CALLER: You know, I’ve been watching this for the last year probably develop more prevalently, with these special interest groups, those who esteem themselves of high class. I don’t know exactly what you’d say other than that. But, you know, they masquerade around as though they’re the majority and the media has just ate this up to the point just as you’ve just said that they’re the 1%, the actual minority. But yet they want the world, and they own the media, the media projects them as the majority.

RUSH: Exactly right. And I’ll tell you what: It was brilliant psychological warfare because it worked. I’ll give you an example what I’m talking about. Let’s go to Indiana and the law the Indiana legislature passed and Pence signed: The Religious Freedom Restoration Act. Based on the way the media covered that, you would have thought that the American majority had come to despise Christianity, had come to hate it, and was destined to rid this country of any vestige of Christianity, simply because the Religious Freedom Restoration Act had been passed.

And it was rooted in gay rights and gay marriage. So what the media did in Indiana is they went shopping. They started knocking on the doors of businesses with cameras and microphones. They started asking people questions designed to produce people livid at the Religious Freedom Restoration Act, because gay marriage and a number of other things was an affront to religious freedom. People were being denied religious freedom in who they sell products to, who they do business with.

The government was mandating that you do business with anybody despite whether your religious beliefs were being trampled on. So the Religious Freedom Restoration Act was designed to support people of religious viewpoints who did not want to be forced by “the deep state” to have to violate their religious principles. And in Indiana they knocked and knocked and knocked and they finally found a young woman at a pizzeria 30 miles from Indianapolis, and they asked her, “If a gay couple asked you to provide pizzas for the reception, would you?”

And this young woman, she’s 20 or 21, said, “No, it would violate or religious beliefs,” and that began an all-out, nationwide assault on that little pizza shop. And leftist activist groups partnered up and started protest. And the media made it look — and this was the trick. The media made it look like the entire country was outraged at these Christians and outraged at the discriminatory beliefs of these Christians, and refusing to tolerate this discrimination against people of color and people of immigrant status, transgenders, gays, you name it.

And it turns out they had to go knocking on doors to find that one little pizzeria owner. And it was classic the way that they then construct this to make it look like the oddballs had become the majority. I mean, and a sizable majority. And that Christianity was being stamped out and ruled out and overrun and all of that, and that that was good. And this last election exposed the lie of all that. So now, we’ve got these malcontents who are now realizing that the game’s over; they’re not the majority. They’ve been exposed as the minority that they are.

And so they are losing whatever bit of sanity they had to begin with, and they can’t accept anything that’s happened, and they’re still running around trying to make it look like they are the majority. But the media can’t help them now because the election results are obviously far more powerful than any media report.

RUSH: “More Than 90 Arrests in Protests in Washington.” These are not protesters, folks. I’m watching it right now. I mean, these are criminals. These are rioters. These are people breaking the law. This is not a peaceful protest. These are people destroying property. This is “hands up, don’t shoot” Ferguson, Missouri. We’ve seen this before. It’s all bogus, and many of these people are bought and paid for from left-wing donors. Who knows if… I don’t know if they still come from the Clinton campaign. But many of the people protesting during the Trump rallies were bought and paid for by the Hillary campaign.

But even Claire McCaskill, senator from Missouri, tweeted something along the lines of, “This is a disgrace. This is not peaceful protest. This is violence.” But yet everybody in the Drive-Bys is calling it protests. And the Drive-Bys, of course, want to justify the violence. “Oh, yes! It’s quite understandable that the forgotten people, people that Donald Trump is casting aside — why, it makes total sense that they — would engage in this kind.” And it makes no sense whatsoever, and I don’t know. To the extent that this has any impact? I don’t think these riots are going to cause people to regret they voted Trump.

The thinking behind something like this is, “If we show enough outrage, if we destroy enough property, if we disrupt enough normalcy, that they’ll blame Trump for it, and people will say, ‘It wasn’t worth electing Trump, if this is what the result is gonna be.'” But I think they’re miscalculating. I think this kind of behavior is one of the many reasons why Donald Trump was elected. Because I think that a vast majority of Americans is fed up with this kind of behavior, which is exclusive to Democrats. It is exclusive to liberals. You just don’t find conservatives/Republicans who lose elections doing anything like this ever.