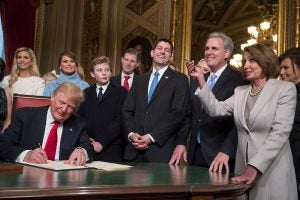 RUSH: What Trump was signing was the formal submission of all of his cabinet nominations to the Senate. That’s what he was signing. There were no executive orders. That’s gonna come later today. There were a bunch of executive orders that Trump’s going to sign. The Obamas are now boarding the 747-400 that will take them out to Palm Springs in California. They just had a little going away ceremony in the hanger at Joint Base Andrews. I don’t know if it was the Congressional Black Caucasians in there, or the Democrats that didn’t show up at the inauguration in there.

I really don’t know. There was a crowd of people. I remember when Clinton left in 2001. While Bill and Hillary were stealing furniture from the White House. And by the way, folks, that did happen. You may think that I’m being caustic or humorous. No, no. They stole! Remember, Hillary said, “We left the White House flat broke.” They stole some furniture and other stuff from the White House. But Janet Reno had her own departure ceremony in a hanger before she left. She was the attorney general and there were all kinds of people in the Department of Justice out there to wish her off.

And other cabinet people have their own going away ceremonies and the hanger Obama just had seen, so he and Michelle just boarded plane which is the one that always ferried them around as Air Force One. They are gonna come back to Washington. They have to make their own way back. This is the last government trip they will be on unless there’s a disaster somewhere and Trump decides to get all the former presidents together and send ’em over there wherever it is like Clinton did.

I mentioned: “At 11:59 a.m. Eastern Time, the official White House website had a lengthy information page about the threat of climate change and the steps the federal government had taken to fight it. At noon, at the instant Donald Trump took office, the page was gone, as well as any mention of climate change or global warming.” It just vanished, and I hope it stays that way. Rex Tillerson is now at the official congressional lunch. He was probably talking oil drilling with John Roberts. That’s who his tablemate was. They’re in Statuary Hall. What is so funny?

Here’s some good news from TheHill.com: “Trump to Tap Republican Ajit Pai as Next FCC Chairman: President Trump will tap Republican Ajit Pai, a commissioner on the Federal Communications Commission, to be the agency’s new chairman. Two industry sources confirmed the move to The Hill on Friday. Pai had been widely expected be picked to succeed Tom Wheeler… One source said that Pai is expected to be named the permanent chair and both that an announcement could come as soon as [this] afternoon.” Trust me: Excellent, excellent news. I’ve gotten to know Commissioner Pai over the years. He’s been part of the outnumbered minority at the FCC for quite a while.