RUSH: So Chuck Schumer promised the Republicans a deal on Mike Pompeo, the nominee for CIA director, and then promptly broke the deal. He lied to them. And they’re shocked! They’re stunned. They’re stunned that Schumer would not do what he said he was gonna do. I can’t believe this! Of course Schumer’s gonna lie! All Chuck Schumer’s got is obstruction. Do you realize by now every other previous president has had at least half of his cabinet already in office, and Trump’s only got two? They’re delaying this just because they can. 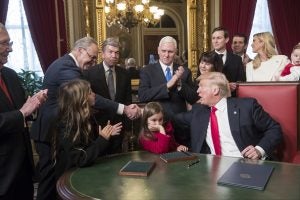 They’re all gonna get confirmed.

Now, Rubio’s even come out with McCain and Lindsey Graham and they’re gonna support Tillerson. So Tillerson’s gonna get confirmed. They’re all gonna get confirmed. They’re just delaying it here. For what reason? To show that they can. It isn’t going to matter. It’s not going to help Schumer. The Republicans have got to stop this thinking that they can coexist in a bipartisan manner simply because the Democrats lost. The Democrats do not think they lost! You Republicans have got to get something through your heads. They do not live in the reality that “is.” They think you’ve cheated them! They think the Russians rigged the election. They do not live in reality. They think that’s a social construct.