RUSH: John in San Diego. I’m glad to have you, sir. How are you doing?

CALLER: Oh, thanks for taking my call. Um, wow. There’s a lot on the plate today. I had a question on the press secretary as far as the story put out about crowd size. You know, the press secretary is the spokesman for the presidency office (sic), and I’m just thinking, “Did he do it on his own to make a mistake, was it done on purpose, and, you know, where does this come from?” And then your question about hitting back at the mainstream media — (crosstalk) 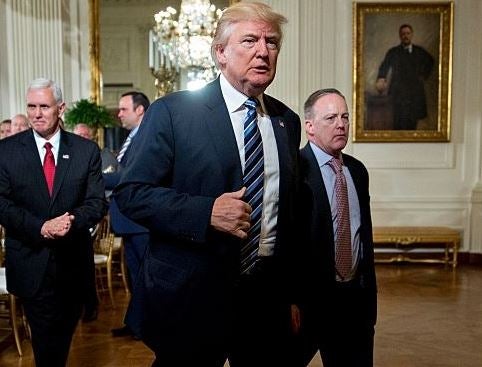 RUSH: No, wait. Wait, wait. Hold it. Hold it. I don’t understand your question. Would you say that again? What did you…? The press secretary, did…? (crosstalk) You’re saying he lied on…? You’re asking me if he lied on purpose?

CALLER: No, that’s just it. I mean, how do we know? The press is going after him like it was done, you know, as a lie from the… Like, oh, they’re just conflating the numbers and it’s, you know, alternative facts blah, blah, blah, blah, blah, and the story’s already manifested itself into something bigger than it is, and I’m just wondering if…? You know, ’cause I don’t want to have Donald Trump out there saying, you know, stories like, “Oh, I didn’t know about this until I seen it on the news,” you know, like our previous president did all the time when something screwed up, like, “I didn’t know about that. I saw it on the news like everybody else.” I’m just wondering if — if, you know, he did it on his own or… You know, as far as putting a story out that isn’t exactly true but, you know —

CALLER: Ummm, well, somebody has to know some —

RUSH: Because you think…?

CALLER: Hold it. Do you think they’re lying about the crowd size?

RUSH: You think Trump and Spicer are lying about it and you want to know who started it?

CALLER: No. It’s like a fish story. You know, when I catch a fish it’s gonna be this big. Well, the story could change. It ain’t no big deal about how big it was. You know, I’m supporting Trump a hundred percent. It’s just the fact that the mainstream media is picking a story like this to go after, you know, the administration on such a nitpicky point. They’re all virtuous all of a sudden about truth. It’s hypocrisy at its finest, you know, when it comes to a story that the crowd wasn’t that big. Well, you know, like F. Chuck Todd yesterday asking Kelly, you know, over and over and over again about the crowd size, and it’s just like, “Really? Come on.” 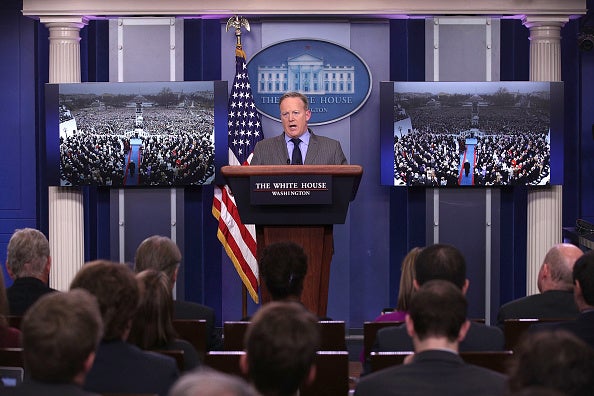 RUSH: Well, but… I just explained that. The reason they’re doing that is to try to create the illusion that Trump is not popular, that he didn’t legitimately win, that there isn’t that much excitement for him. To them, it’s not a nitpick, and that’s why Trump’s fighting back on it. Trump knows exactly what they’re trying to do with this. What’s being reported is that Trump is a megalomaniac, that he’s an egomaniac, and that he’s a narcissist. And he cares about all these things like crowd size and everything.

What they’re not reporting is they start it. They report. They put up a couple of phony pictures side by side to try to create the impression that nobody cared about Trump’s inauguration. Well, I had Trump on this program back in October, and I asked him about the constant hit back via tweet or other method attempt use. And he said he did it because he’s not gonna sit there and allow his name to be muddied and just sit there and have a lie establish and the roots planted and have it start growing. If it’s about him, if it’s about his name, his business, or his family, he’s not gonna put up with it.

They started it. Then Spicer goes out and responds to it, and they claim Trump is a baby, they claim Trump’s a narcissist, they claim Trump’s a megalomaniac. When they started the whole thing designed to create an impression in people’s minds that Trump is not popular, that this election was some kind of a giant mistake, that all of the evidence the media can assemble and show you like crowd size at the inauguration. “Why, there’s nobody there compared to Obama’s. Why, there’s nobody there compared to even Obama’s second one.” Ergo, this is all a lie.

Trump really isn’t that popular and something went wrong in the election and they’ve got the Russian angle that they can fall back on. So in truth, I said, “Crowd size doesn’t matter,” because it’s not gonna have any effect on whether Trump won or lost. He did. He won. It’s not gonna have any effect on Trump’s agenda. So the size of the crowd doesn’t matter. The media is trying to make it an issue, and the difference here is Trump hits back.

And they claim Trump has no right to hit back. Trump has no right to respond to what they do. This is not what presidents do. He should be above that and let them get away with whatever they want to say. Now, then I asked — I think you prepared. The next question is, John: What about Trump hitting back on all these things? Do you like it or not? Do you wish he would not respond to all of it or do you like the fact that he does?

RUSH: Well, but the problem is with that… You’re talking in this case about Kellyanne Conway, who’s on Meet the Press, and F. Chuck Todd is trying to make a big deal out of crowd size, and he’s showing her this and showing her that, and audience size — ’cause Trump talked about largest “audience,” not “crowd.” That’s another distinction that he made: Audience is different than the live crowd at the event. And he said that his is number two, as announced by Entertainment Weekly (chuckles) which used Nielsen numbers.

By the time you throw in streaming and social media, which wasn’t as prominent eight years ago, it’s probably true that that Trump’s got the second most watched inaugural. Everybody’s acknowledging Obama’s in 2009 ’cause historical of the aspect and all, first black president and all that. But if Kellyanne is on the show and F. Chuck Todd doesn’t let her go and he keeps poking at her, what is she supposed to do? She’s not in control of that. She’s not the one continuing to hit back.

Chuck Todd is continuing to ask her. So she comes out with the answer, “Well, Chuck, Sean had some alternative facts.” And the media jumps all over that. “Alternative facts? What do you mean ‘alternative facts’? There aren’t any alternative facts!” Yes, there are. The media’s first facts are not true. The media is purposeful lying about I can’t tell you how much. They lie about the Martin Luther King bust being thrown out. For crying out loud, the media didn’t tell us the truth and didn’t demand the truth from Hillary on Benghazi.

It’s just beyond the pale here how much fake news the media is responsible for and is behind. And so Trump responds to it, and they ignore their role in it and then say, “Trump is small-minded, megalomaniac, small-minded narcissist,” when all Trump’s doing is reacting, which is what we have always wanted people in our side to do, by the way, folks. We have always wanted ’em to fight back and we got mad when they didn’t!

Now, if the media keeps bringing it up, like continuing to ask Kellyanne Conway a number of times, I mean, I guess she can try to shut it down, but there isn’t any way to control what the media does. You really can’t shut them up with alternative facts. You can’t shut them up by embarrassing them. They’re who they are ’cause this is warfare. And their mission is to destroy Donald Trump. And that cannot be forgotten.

Whenever you watch any of this back-and-forth, you cannot forget what the objective here is, is to destroy Trump’s presidency, and the sooner, the better, as far as they are concerned. I’ll take the occasion — John, thanks for the call. You know, I took a break from things over the weekend, and it must have been Friday night or Saturday. I forget — no, it couldn’t have been Saturday, I was playing golf. So it had to be Friday night, yeah, it was Friday ’cause the inaugural’s Friday. Here’s what happened. 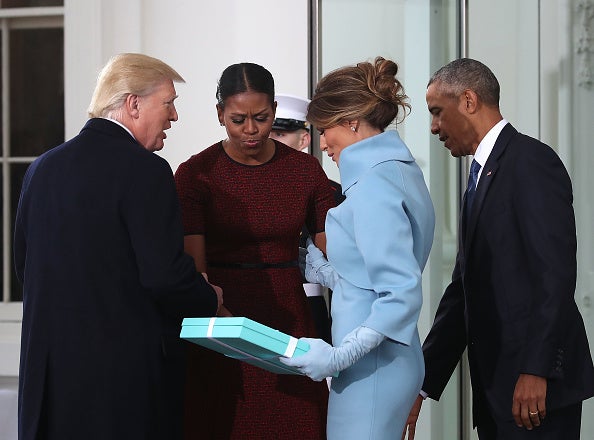 So Melania gives Michelle the box, and Michelle stands there holding it in both hands kind of looking around like, what is this, what do I do with this? She tries to give it to an aide to take, because she wants her hands-free. There were some still-shot photos from that video taken, and I’m reading my tech blogs about this Friday night, and they’re making fun of Melania for having the audacity to give Michelle something from Tiffany, and they think Michelle is the greatest in the world because of this expression of disdain on her face.

When you go anywhere, if you go for dinner, you take something, you take a bottle of wine, it’s standard, ordinary procedure when you’re invited. In this case, Melania Trump was trying to extend a little informal gift, and even that became some kind of a sign of disrespect to the Obamas. But Michelle handled it well, look at the expression on her face. She clearly didn’t have any desire to take anything from Mrs. Trump. These young Millennials just thought it was the greatest thing. You know, and I’m thinking what in the world is happening to just base manners.

How in the world is the incoming first lady giving the outgoing first lady a gift, what in the world is controversial about that? What is hateful about it? How can you see anything in that exchange that makes you feel happy because you think Michelle dissed Melania. There’s some really, really, putrid, sick cultural rot taking place in our country, and you have to look harder and harder to ignore it.

And this crowd size debate and the audience size debate, folks, it’s not — one thing John’s right about, it isn’t about that at all. It’s about the left media, their ongoing effort to delegitimize Trump.