RUSH: Donald Trump just announced a freeze on federal hiring. Here’s how it sounded at the White House…

TRUMP: Everyone knows what that means, right? We’ve been talking about this for a long time. Okay. Great thing for the American worker, what we just did. 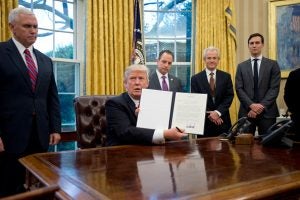 TRUMP: Except for the military.

PRIEBUS: Except for the military.

TRUMP: Except for the military.

RUSH: “Except for the military.” A federal employee hiring freeze. This is sending shock waves through the remnants of the Women’s March.

RUSH: So Trump there signs an executive order freezing federal hiring. That’s just the beginning. After the freeze on hiring is going to come the whittling of the federal employee workforce. Trump also signed a notice that starts the process of withdrawing from the proposed Trans-Pacific Partnership trade deal. But the freeze on federal hiring excludes national security and military people, but it’s part of the Trump 100-day Action Plan to Make America Great Again.

And there’s a story here at the Politico: “Revenge of the Bureaucrats — Federal workers fume over Trump’s vow to freeze hiring and shrink the government.” Many of them say they’re gonna quit. They’re gonna quit in protest. “Twenty-eight percent of federal employees may quit their jobs when Trump assumes office.” I doubt that that’s happened yet. It’s all just a bunch of words. But they may not have any choice in the matter.