CALLER: Hey, how you doing, Rush?

CALLER: I just wanted to, first of all, thank you because I live here in Ft. Lauderdale, real close to you in West Palm, right?

CALLER: Okay. So, anyway, I’ve been listening to you for the last maybe nine months and —

CALLER: — I’ve become somewhat of an authority around my house. And it’s just been really eye opening. You have really schooled me in the art of speaking politics and breaking things down and translating —

CALLER: I actually listen to WOR in New York and listen to Mark Simone and Len & Todd in the Morning as I drive a truck around Fort Lauderdale and West Palm.

CALLER: And I ran into you. I didn’t look for you, you just came on at noon and you started speaking something about Trump. I’ve been supporting Trump since the beginning, which, by the way, it’s really ironic that I am an immigrant, I am black of Dominican descent, and I married an Anglo-Saxon wife, but, you know, according to the liberals, I should have voted for Hillary.

CALLER: But never mind, I voted for Trump and everyone in my house supported Trump. But aside from that, my son is 26 years old, and he sits upstairs in a loft that we have and he’s into computer games. He’s 26, he makes a good living, but he was pretty liberal. I had you on from 12 to three, and me and my wife would just walk around, laugh, we would get to understand things that was going on, and before you know it, came time to vote, he voted for Trump, and he was a Hillary supporter. I mean, he basically owed it to you, you know, I would hear him giggling upstairs when you would break things down and just lighten him up, you know, make him understand —

RUSH: Well, let me tell you something, Raul, I thank you. What I hear you saying — correct me if I’m wrong — but the way I explained Trump and his supporters resonated with you and your son. Is that right?

CALLER: Yes. Definitely. He understood in layman’s terms, and also just the common sense. When you explain things — I wish that Trump would find someone to be the press secretary to put him up there and just have someone like you that pretty much says it like it is and would answer the press. Sometimes I think they choke. As good as they’ve been doing lately, man, if we could clone you and send someone up there with the same guts that you have to just tell people how it is, it would be amazing. 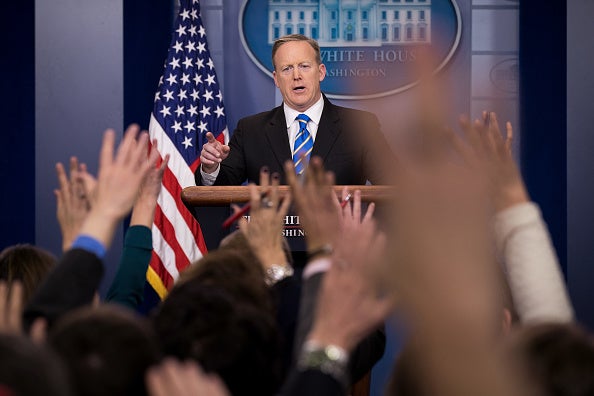 RUSH: Well, Sean Spicer’s pretty good. Sean Spicer came over from the Republican National Committee, and he’s pretty good, and he’s exhibiting a fearlessness that is very much needed. And he’s doing a great job. You’re very kind out there, Raul. I really, really appreciate it. And you’re very shrewd and observant. There aren’t very many people — I’m just gonna say this. You’re still there, Raul?

CALLER: I am still here, yes.

RUSH: You know, sometimes, I don’t do this often, but I do get introspective now and then. It’s necessary to do a good job. And I always try to be honest with myself and keep everything in perspective. I work on that very hard.

CALLER: And you call them a Looney Tune and I appreciate that.

RUSH: Well, they are.

CALLER: It’s a fresh take that everyone’s getting from Trump and yourself.

RUSH: Yeah. But one of the things I was gonna say is you have identified something that was crucial and important to you and your son and that is the way I dissected Trump and explained who Trump is and who his supporters are from the get-go, and why he was appealing to people. And I think you probably took it to a greater detail of understanding than many first-time listeners do. So I just wanted to thank you for that and wish you the best. I’m glad you called and I hope you stay in the audience out there. What do you do for a living, Raul?

CALLER: I drive a truck on the weekdays and then I’m a deejay on the weekends. And by the way, I have a grandson, just came new, and I want to get him started on the Rush Revere books.

RUSH: Oh, cool. Cool. How old is the grandson?

CALLER: Two. I can’t wait. But thank you so much on behalf of my family and everyone here you really have put everything in layman’s terms and really opened my eyes.

RUSH: You’ve made my day, Raul, I really appreciate it. Rush Revere books. Get his contact data. We’ll send a set of the books for the upcoming growing grandson.