RUSH:  There’s some more progress to report to you.  The Centers for Disease Control have canceled a major climate change conference.  What the heck is the CDC doing conducting a climate change conference?  And, by the way, the babe march, the feminazi march was so successful that now a bunch of scientists are planning a march on Washington.  Man, are they gonna admit they politicize science?  Yes, they are. 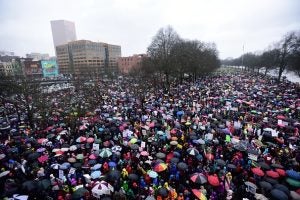 RUSH: Okay, the feminazi march on Washington on Sunday, rousing success. TheHill.com reports: “Several scientists are reportedly planning a march on Washington and have taken to social media to garner support for the movement. A Twitter account that started on Monday has periodically sent out updates and requests for people to get involved.” By the way, we’ve learned something new about Twitter. Although I, and we here at the EIB Network already knew it, do you realize they have discovered hundreds of thousands of fake Twitter accounts that are essentially being run by robots?

They’re called “bots,” or “botnets” (“bot” being short for “robot”), and these are programmed little bursts of computer energy that are designed to look like they have been created by people. By the way, folks, this is actually very important. Social media has been used by everybody that wants to use it to try to influence public opinion in any number of ways and to lead boycotts of sponsors, to lead boycotts of organizations or what have you. And one of the reasons that it’s been successful, because it’s made to look like tens of thousands — in some cases hundreds of thousands — of people are involved.

Like, let’s say that you are ABC Widget Company, and you make widgets, and there’s somebody in social media that doesn’t like you and wants to harm your business. So they create bots that do nothing but send fake complaint letters to you, the business owner, and to everybody else warning them that you are a scum business and to stay away. The business owner says, “Oh, my God! Oh, my God! How am I gonna stop this?” And then everybody else stays away from the business because peer pressure or what have you. And in this way 10 people… In our case we uncovered this.

Ten people make themselves look like they are thousands or hundreds of thousands of people. And the recipients of these bot tweets are not sophisticated enough to look at where they’re actually coming from. Part of the fakery is that these tweets are made to look like they’re local. So the ABC Widget Company is in Oshkosh, and it’s made to look like a number of these tweets are coming from the Oshkosh-Neenah area of Wisconsin, the Appleton area of Wisconsin. Which makes the business owner there think, “Oh, my God, local customers hate my product? Oh, my God,” or any other way they want to try to manifest harm to people.

It’s been discovered that there are hundreds of thousands of these fake accounts with these mindless little computer-created bots running around with fake messages made to look like they’re attached to real people. It is the ultimate in phony baloney, plastic banana, good-time rock ‘n’ roll. There was a movement made up of just this kind of thing aimed at us. We uncovered it through deep investigation, and now it’s being discovered that all kinds of these operations are out there. It’s all fake, and it’s all made to look like it advances the causes of the left and the Democrat Party.

It’s all part and parcel of the way the media attempts to make it appear that everything they are covering, with opinions beside that they hold to be majority opinions… It’s a giant con, and it’s been going on for as long as there has been Twitter. Facebook has its own slightly smaller version of the same kind of thing. But what reminded me of this was this little story here in The Hill about the scientists now planning their own march. “A Twitter account that started on Monday has periodically sent out updates and requests for people to get involved.” It may be a bot. It may not even be an actual scientist. It could be; we don’t know.

It could be a bot, could be a botnet that’s up and running trying to create the illusion, which is a stupendous number of scientists out there that now want to get in on the public march business. Now, here’s what it says about it: “The date of the March will be announced officially next week! Do not believe any rumors of a date until then!” “It has never been more important for scientists of all stripes to come together and have their voices heard in government.” “Thank you so much to everyone who volunteered today. We have hundreds of volunteers! If you don’t hear back immediately, don’t worry.”

It’s called @ScienceMarchOnDC. “The idea began from a subreddit, the Washington Post reported, where scientists discussed a way to respond to the Trump administration’s skepticism of climate change and other science-focused policy issues. Seeing the size of the Women’s March on Washington following President Trump’s inauguration, someone suggested a ‘”Scientists'” March on Washington.'” So are they all gonna wear the little white coats? Gonna have little test tube hats? Can you see a sea of white coats? ‘Cause, you know, it’s the white coat — the visual of the white coat — that assigns authenticity. 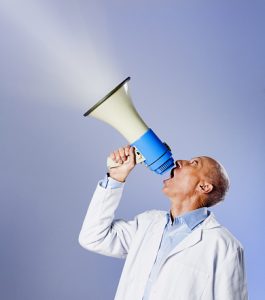 So you could have just an endless parade of human debris out there wearing white coats, and people would think, “Wow, it’s a bunch of scientists!” I’ll tell you the risk they’re running, and it may not be a big one given the neophyte knowledge that so many low-information people have. But they’re gonna be admitting that science is now political, and science — real science — is not political, but the left has politicized everything and now they’re gonna run the risk of admitting to the world that climate change is a political issue front and center, back and forward, in and out, and nothing to do with science whatsoever.

At least they’re gonna give us the opportunity to point this out.

Now, I want to go back to this bot business, and I want to give you an example of it. The Daily Beast reported this. It was back in April of 2016, my good friends, that the Hillary Clinton super PAC, which was called Correct the Record… Do you remember that by any chance? Hillary was of the opinion that people were lying about her, Bernie Sanders and the media and me, a bunch of people were lying about her. So they created a super PAC called Correct the Record, and its purpose was to provide alternative facts (ahem) to allegations made about Mrs. Clinton.

And in this story The Daily Beast, which is a left-wing rag publication, it says the Clinton super PAC openly admitted to spending a million dollars to hire fake online Hillary supporters to swarm social media sites like Reddit and Twitter to counteract Crazy Bernie’s supporter’s points about Hillary in the interests of unity. Now, what is a fake…? At the time the story was written, what is a fake Hillary supporter? It’s a bot. They were creating robot or botnets of fake human beings. It’s much easier to go out and actually hire some computer people to create the bots than to actually hire real people and pay them to act like Clinton supporters.

Because what if they don’t? What if they’re lying to you? What if you go out and hire a bunch of people to behave as though they support you and they’re Crazy Bernie people, and they’ve sabotaged you? So they were creating bots. It’s the only way you can guarantee that all of this mass swarming on Reddit and Twitter was actually pro-Hillary, was to create the bots by the people creating. Washington Times, July 14th, 2016: “Beware the Soros Zombies — Billionaire George Soros funded liberal organizations intent on bringing confusion, disarray, and trouble to the Republican convention in Cleveland next week, and they’ve already had some victories.

Civil rights groups, Color of Change, which Soros gave money to, signatures, a petition demanding Coca-Cola and other things. They did this with this bots, raised the money, sent out the phony and fake mess. Coca-Cola ended up caving to the pressure and decided to only give $75,000 to the convention. George Soros! It’s exactly what I was talking about in my example a moment ago. A botnet of phony, fake, nonexistent human being users was flooding sponsors of the RNC convention, threatening to boycott, never buy the product, and Coca-Cola was one of the companies that caved. They don’t know.

And even if you go in and tell ’em, even if you have the evidence… I know this, my friends, because we’ve done it. Even when you take the evidence and you are able to incontrovertibly prove that it is not people that are sending them tweets and messages on Facebook, that it’s computer-generated garbage, it still comes in. They still see it. It’s something they’d rather not deal with. They didn’t go into business to get into political fights. Some do, but most do. So the easy way out is to just say, “You know what? I don’t care. I’ll take the money away from the Democrats. I’m not gonna fund the Democrat convention; I’m not gonna fund the Republican convention.”

It, by the way, backfired on Soros in that way in two or three instances because not only were they effective in creating fear and panic in sponsors of the Republican convention, some of those same businesses said, “To hell with this,” and pulled out of both. But the point is, folks, none of it was real. It was all manufactured computer algorithms and whatever computer language makes sense to you. Botnet may not make sense. Algorithm, you may think you know what that is. So just think of it as a phony computer program that is written to impersonate the characteristics of human beings, including names, address, email address or Twitter handle or what have you.

I mean, it’s well done, and they’ve found something like 300,000 fake such accounts on Twitter. So it’s a common facet now of the daily back-and-forth in media and in politics. And all of this stuff now… Fully 90% of this stuff is generated by the left, the worldwide left, the American left, the Democrat Party. Everybody else is out working! Everybody else is just living their lives. But this kind of garbage and filth is the life that people on the left live. Because, remember: They can’t leave it up to a level playing field. They will lose nine times out of 10 national elections, national issues when the subject is ideas.

Sanctuary cities? Defund ’em. He’s dead serious about all this stuff, and it’s all coming under the umbrella of “Make America Great Again.” He is attacking all of these things that have weakened the country, have divided the country, and have made us poorer in a financial sense. Last night one of his tweets: “Big day planned on NATIONAL SECURITY tomorrow. Among many other things, we will build the wall!” So now the Drive-Bys are focused, “Well, yeah, but the American taxpayer’s gonna provide the original funding!” Missing the entire point. Missing the whole point.