RUSH: Mark Cuban, the Dallas Mavericks owner, there’s a lot of people out there that want to make these protests and what happens in social media representative of a serious opposition that’s much larger than Trump. And they have faith that Trump can be stopped simply with social media and protest marches. So this morning on CNBC Mark Cuban asked by Andrew Ross Sorkin — well, the question’s very long. Cuban’s answer here is the point. Let’s just play that. 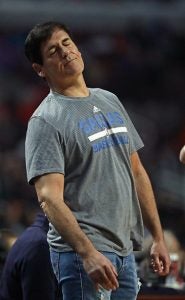 CUBAN: First of all, Twitter is not a reflection of anything, right? If you are the type that wants to scream about boycotting, you automatically go on Twitter and you automatically go on Facebook. That’s not the real world. You look at your own business numbers to determine that. He won. He’s our president. He’s the president most likely for the next four years. You know, he’s our guy. And so all that changes.

RUSH: Here’s a guy who thrives on Twitter telling everybody it’s not the real world. And it’s important because people who tweet all the time really think they’re making a difference. They really think, especially with all the likes, dislikes or whatever you have on Twitter, retweets, I guess, and it really, really, really matters. And it can change somebody, get rid of a president. It can create a protest march. And he’s telling everybody, you gotta keep everything in perspective here. It’s not the real world. Folks, if it were the real world, I would be there, and I’m not.