RUSH: Okay, we got some polling data in on the Trump executive order. Rasmussen: 33% — only 33% — oppose the ban. Only 33%. Now, you compare that with the way the media has portrayed these protesters and the movement and the supposed national outrage to this, a full 57%, which we’re gonna round up to 65% — well, there’s some unaccounted for here, there’s some don’t-knows and what’s the question-type answers. But 57% in the first poll supported Trump’s temporary ban. 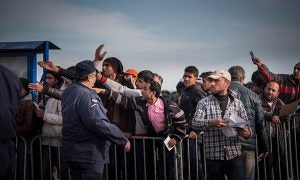 This was not turning our backs on refugees. This whole thing is so mindless. I can’t tell you this whole thing, the same process, the same lying, stinking procedure oriented around protests continues to happen. It’s by rote. It is not organic or spontaneous, and people continue to fall for it. Maybe not. Only 33% oppose the ban. Fifty-seven percent support it. As I say, rounded up to 65% ’cause we know that’s what it really is. And I knew it! Because I know America. You know why? ‘Cause I am America. And you are America. It’s just that simple.