The Media Can’t Keep Up with Trump

RUSH: Chris Wallace said on Fox News Sunday during the group panel, that Trump is moving so fast that he can’t prepare his show anymore. (laughing) Grab sound bite number three. Gotta hear this. ‘Cause, Chris, if you think it’s tough (laughing) preparing one one-hour show… I say this in all good friendship and with good vibes. I’m not meaning to sound in any way negative. And here’s what… But he’s right, by the way.

I’ll tell you my own style. I still prep this show the traditional way. I start about five o’clock. Two hours after this program ends, I start working on tomorrow. And intermittently all through the night, which basically is just reading. You know, just staying aware, staying informed about what’s going on. Same thing the morning of the next program. And then the program starts. In the old days, you could do that and you go through the three-hour program and pretty much have everything you needed to say already lined up, or at least the things you’re gonna talk about.

But this predates Trump. Now, sometimes show prep, I don’t use 80% of it because of what happens during the show. But I have not gotten lazy. I could very easily say, “You know what? I could stop this stuff at night. I could go out and live! You know, I don’t need to do all this. I just need to make sure I’m paying attention from, say, 11 o’clock in the morning on and I got it covered.” But I’m too committed. I still prep the program the way I always have. What you don’t know… Folks, I walk out of here every day with guilt like you can’t believe. You know why?

Because sometimes 80% of what I have here ready to go I never get to because it gets superseded by what happens when the program starts. Today is one of those days. I have three Stacks of Stuff here, and all of it juicy, all of it great, and I’ve got sound bites out the wazoo, and I’m gonna get to 10% of it today. I’m gonna walk outta here thinking, “Man, did I blow it.” The only saving grace is, you don’t know what I didn’t get to. So you can’t call me to carpet on it. It’s like the old saw when I played records as a deejay.

The theory was you could never be hurt by a song you don’t play. But you can be hurt by a song you do. If you play a rotten song, you play an unpopular song, people are gonna punch out and go to a completing station, but if you never play that song? People will never punch out for that reason ’cause they’ll never hear it, and they’ll never know for sure whether you didn’t play it ’cause nobody listens 24/7. But it still, every day, to one degree or another, grates on me that I don’t get to so much. So I have another Stack that keeps getting bigger and bigger and bigger of the unused every day. I use it as my backup in case there’s a nonnews day, and of course there is never a non-news day.

Here’s Chris Wallace talking about it with his buddies yesterday… 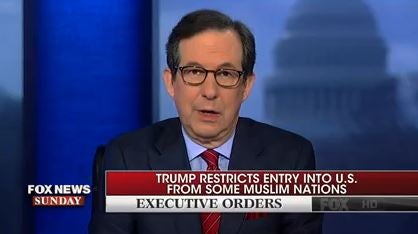 WALLACE: You know, I — I’m beginning to call these “Trump Sundays” because I prepare this show on Saturday and by Sunday morning the world has changed, and what I thought we were gonna be talking to you about is the president’s phone call with Russian President Putin yesterday, which was highly anticipated.

RUSH: This is why I say that the left is never going to fully gain the momentum. They’re never going to totally gain the narrative because Trump has the ability to reclaim it any time he wants. But Chris says, “Yeah, we were gonna talk about Trump calling Putin. Well, that’s out the window now that Trump’s turned his back on every refugee.” (laughing) But let’s get started on some of the audio sound bites. I want to start here with David Brooks, who’s apoplectic. I think this sound bite from David Brooks from The NewsHour on PBS Friday night pretty much establishes the state of mind of the entire establishment after Trump Week One…

BROOKS: (muttering) Among businesspeople I’ve spoken to, among political class, and among the Republicans on the Hill, just a great sense of being unnerved, unnerved at the instability. There’s sort of, uh, two theories of “he tells things that are false all the time.” Is it because he’s sort of an Orwellian figure, an authoritarian figure who’s twisting words in an Orwellian manner — 1984 — to exercise power and control people’s minds? Or is he a five-year-old who has ego needs that needs to be fed and the universe has to warp around his ego needs so he can feel good about himself and everybody has to produce photos to make the monarch feel like he’s made of gold.

RUSH: They are trying to figure it out. Trump’s never tells the truth. So now it’s psychoanalysis all the time. (gruff voice) “Is it because he’s a secret authoritarian? Is it because he’s right out of 1984 and is masterfully putting a mind control on all of the American people, or is it that he’s just five years old and needs to be told how great he is all the time?” Here is Thomas “Loopy” Friedman, who really is loopy.

New York Times columnist. CNN this morning, Alisyn Camerota — and this is about putting Bannon on the National Security Council, which they are just… They can’t believe this, because to them Bannon is the anti-Christ. Steve Bannon is the embodiment of what they hate being at the right hand of Trump, and so when they put him on the National Security Council, that’s just one of the primo insults to the establishment. So Camerota asks, “Is this a political move, consolidation of power on Bannon’s part?”

FRIEDMAN: (whispering) My biggest worry about President Trump is that this man came out of a very narrow real estate background. Every profile of him says he doesn’t read books. He learns from watching the shows and from the last person who talked to him. And I think as a result he is easily manipulated ’cause I don’t think he knows in-depth a lot of these issues. And when an ideologue like Bannon comes along or people on any number of other issues, he’s — he’s easily manipulated. I quoted a friend of mine who said, “You Americans, you kick around this country like it’s a football. But it’s not a football. It’s a Faberge egg. You can drop it; you can break it.” If we go weak as a country, if we get distracted, if we get knocked off our values, your kids won’t just grow up in a different America; they will grow up in a fundamentally different world.

RUSH: See, this is why the guy’s loopy. (laughing) That was another thing. You see, Obama was the quintessential intellectual. Not only did he read books, he wrote books and he spoke well and all that, and Obama watched TV, too, and Obama talked a lot, and Obama had ideologues all over the place. He was the chief ideologue! But the big talking point in this bite is that America is a Faberge egg.

And we’re not fragile at all. The last thing, the last word I would ever use to describe the United States of America and the people who make it work is fragile. They are strong, they are committed, and they refuse to bend to the demands placed on ’em by the Obama administration. They full force rejected the agenda of the Democrat Party. That is not fragility. That is strength and that is commitment and that is courage to go against the Drive-By Media, to go against the Democrat Party, to oppose the first black president of America. It was courageous. It wasn’t fragility.

But they believe it, folks. They believe we’re all fragile. They aren’t, but we are. The great unwashed are very, very fragile, the climate is very, very fragile. We’re teetering on a very narrow precipice, and one little gust of wind the wrong direction and we can destroy the world if the United States goes in the wrong way. And if we get knocked off our values, your kids won’t just grow up in a different America, they’ll grow up in a fundamentally different world. Aren’t the Chinese gonna set us straight, Mr. Friedman?

Here’s Trump, we move on to audio sound bite number 22. It was Steve Bannon who told the media, “You’re the enemy.” Well, he said, “You’re the opposition party. You need to close your mouths and listen. You still don’t know why Trump was elected. You don’t know why Trump’s president. You don’t know this country. You need to stop talking and listen.” They interpreted that as Bannon telling them to go out of business.

RUSH: By the way, I want to correct something that David Brooks said. David Brooks said that Trump doesn’t have a mind of his own, essentially, that he’s influenced by the last thing he hears. You know, whatever the last person he talks to says, that’s what Trump believes ’cause he doesn’t have a mind of his own, because he doesn’t have enough intelligence to make up his mind. He needs other people to provide him ideas. He needs other people to tell him what he thinks and what to say, and that’s the danger of Bannon.

I want to tell you, I know Donald Trump. I’m gonna tell you something, folks. Donald Trump knows what he knows and believes what he believes before hearing from anybody. Do not doubt me on this. I have up close personal experience with this, and so do others. How many times have you heard the complaint that Trump doesn’t listen to people? Remember that from the campaign?

Remember the media going to all these people in the Trump inner circle. “Yeah, we advise him. We’re telling him, ‘Stop attacking people who attack you,’ and he doesn’t listen, he just doesn’t listen.” How many times did we hear that complaint? But here comes Thomas “Loopy” Friedman that Trump doesn’t know what he thinks unless somebody tells him what to think.

You can trust me when I tell you that is not true. Trump knows what he knows and thinks what he thinks before he brings in Steve Bannon or Kellyanne Conway or anybody else. He hires people that he likes and who think like he does. He’s not hiring people to tell him what to think. I actually think that’s another one of these old saws that’s probably more applicable to Democrats.