RUSH: Nick in Gilbert, Arizona. Nick, great to have you. How are you doing, sir?

CALLER: Good. Thanks for taking my call, Rush. Big fan.

CALLER: Yeah, I just wanted to kind of get right to the point here. Following the terror attack in London, Trump tweeted out his criticism against the mayor of London for his response basically saying there is no reason to be alarmed, as extra police would be deployed. And then MSNBC’s anchor — I don’t know if you caught this — Thomas Roberts — speculated that Trump was actually trying to incite a terrorist attack in the U.S. and basically saying he was trying to provoke something that he can politicize more for his own gain in America.

My point was with that kind of rhetoric increasing from the media that’s just kind of lost it, they’re getting dangerously close to pushing a conspiracy where, if there is a terrorist attack here in the United States, blaming Trump of a false flag or something of that sort in saying that basically it would be his own fault for provoking it. And then using that as a justification to do whatever, you know, he would do in response to that. So I just want to kind of get your take on that to see how crazy they are.

RUSH: Thomas Roberts is too stupid to be part of a conspiracy knowingly. He could be duped into being part of one, but he’s too stupid to be at the outset, the origination point of one. Thomas Roberts is so stupid to actually believe — this is my point, these people believe this. The smart people on the left will use that for exactly the reason you suggest, to try to bait Trump or bait a terrorism attack. The truth is if anybody’s anticipating a terror attack, it’d be the left so they can then blame Trump for it by doing exactly what this idiot Thomas Roberts says Trump is actually trying to create a terror attack — I didn’t think there was anything wrong with ’em. I thought we’re supposed to not criticize terror attacks.

Reuters won’t even let us use the word “terror.” I thought we’re not supposed to do anything here ’cause there’s a backlash. I thought whenever there’s a terror attack, what are we told? We’re told it’s Trump’s fault, we’re told to keep a sharp eye on people that might engage in a backlash against Muslims and so forth. Every time there’s a terror attack, it is defended, it is watered down. They try to tell us it’s not what we think it is. And yet here they are in the case of Thomas Roberts and others advocating for one, so that they can blame Trump for it. It is they who are actually doing what they are getting ready to accuse Trump of doing. It’s not on Trump’s mind to create a terror attack in America. If there’s one person trying to prevent that, it’s Donald Trump. Let me give you —

RUSH: What was that? Go ahead.

CALLER: I was gonna say, yeah, absolutely, and what further kind of bothers me is how emboldened these folks get like that Reza Aslan at CNN taking to Twitter and calling the president a POS and whatnot for — you know, they have no sympathy for the actual victims, as they’re only animated by their tense and —

RUSH: No. Here’s the way you have to look at this. You have to look at all of these events through the following prism. No matter what happens, a terror attack in London, a terror hammer attack at Notre Dame in Paris, whatever it is, if you want to understand the left’s reaction to it, you need to be able to put yourself in their shoes and find a way to blame Trump for it and then to use the event to get rid of or discredit Trump, because that’s what all of this is about.

Whether there’s a terror attack anywhere or not, the purpose of it — well, the way it’ll be used is to further delegitimize the Trump presidency by blaming him for it, by blaming his rhetoric, by blaming his travel ban. Tather than blaming the actual perps, it will all focus their blame on Trump. Even these dumb, stupid judges on the Fourth Circuit who overturned Trump’s travel ban because of what he said during the campaign. And what he said during the campaign made these stupid judges think that Trump wanted to ban all Muslims.

It’s asinine. It’s stupid! It is not what the executive order says. This is pure, unadulterated hate. The Democrats, the left have become a giant hate group. And, folks, there is no reason in these people. This is pure, 100 percent corrupt, evil politics, or worse, that governs their thinking, their day-to-day thinking. If they’re having an outdoor barbecue — wait. They wouldn’t. That’s climate change causing. Whatever these people do. 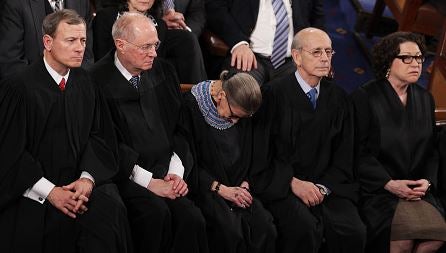 It’s interesting. Ruth Bader Ginsburg, under their theory, ought to have to disqualify herself from hearing the appeal, because Justice Ginsburg has made speeches outside the court in which she has questioned Trump’s honesty, credibility, and she has commented on the politics of current events in a way that gives away what she thinks.

So the same theory these judges say that they are not gonna find in Trump’s favor because of what he said on the campaign trail, then Ruth “Buzzi” Ginsburg ought to have to excuse herself, recuse herself from the case for having done exactly what Trump did. In fact, the case for her recusal is far more glaring than anything Trump has done warranting their decision at the Fourth Circuit.

RUSH: July of 2016 Judge Ruth Bader Ginsburg was quoted in a CNN interview deriding Trump as a faker. Now, he hadn’t been a candidate for very long. This is July of 2016. So Trump had basically announced the month prior. And CNN walks in to Judge Ginsburg’s chambers to do an interview, and here’s what she said of Trump.

“He’s a faker. He’s a faker. He has no consistency about him. He says whatever comes into his head at the moment. He really has an ego. How’s he getting away with not turning over his tax returns, huh? The press seems to be very gentle with him on that. At first I thought it was funny. To think that there’s a possibility he could be president.” And her voice trailed off gloomly, it says here. “I think he’s gotten so much free publicity,” she added. “Every other candidate’s turned over tax returns, and Trump hasn’t.” 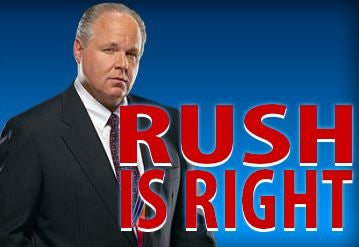 Okay. Now, there’s no mechanism to recuse a Supreme Court justice. They have to do it on their own. It’s the honor system. So there’s no way, for example, Al Franken could force her to recuse himself like he did for Sessions to recuse himself from the Russia thing. That’s irritating Trump, by the way. It irritates me. It irritated me when it happened. What the hell was that about? Why does our side constantly cave? It’s like The Politico. I’m sure they got the idea from — have you seen The Politico story today? “Real resistance to Trump: The GOP Congress.”

The Politico, by the way, is where the Republican establishment goes to plant its seeds. I have pointed this out for years. If you want to find out what the Republican establishment is really thinking or what they want leaked, you read about them in The Politico and you’ll find out. This has a picture of Richard Burr, Senator from North Carolina. And this story — you ready for this? This story promotes the Republicans in Congress, that they are taking their constitutional duties seriously to protect their turf. They’re not letting Trump steamroller them. It’s finally about time that Congress got concerned with protecting its constitutional turf under the separation of powers.

Now, the Democrats gave up all congressional power and let Obama have it because they were so devoted, so excited, didn’t want to stop Obama doing anything. But the Republicans don’t want Trump to do much. This idea, after seven years they don’t have a health care plan that can work. Mitch McConnell, every time he opens his mouth it gets worse. “I just don’t find 50 votes. I just don’t see how we’re gonna get the…” I mean, is it not obvious, they don’t want to find 50 votes. They don’t want to do the Trump agenda and they’re stalling it and doing everything they can to stop it and oppose it.

We don’t need Democrats opposing Trump. That’s a given. But now since The Politico has reported on it, you people knew it weeks before The Politico does, and you didn’t need me to tell you. It’s that obvious. I’m sure many of you appreciated me telling you, but you didn’t need me to tell you. I mean, is it not a joke that the House and Senate can’t even come up with a health care bill that looks like anything voters in this country elected them to do? “Tax reform? We can’t cut it over here, we can’t raise over here, we can’t find, I don’t know.”

It’s insulting. But anyway, it’s out there. The real resistance to Trump, the GOP Congress. In this case, as I say, the media is praising the Republicans. When’s the last time Republicans in Congress, in the House of Representatives, got media praise? Can you think of it? When’s the last time it happened? I can’t think of any. It’s not a trick question. Not like this. Politico — who wrote this piece? Josh Chafetz just going on and on about how the Republicans are doing great, they’re holding onto their turf, they’re not letting Trump run all over ’em. This is exactly what the founders intended, this story said.

When’s the last time the Drive-Bys cited the Founding Fathers positively? Normally when they cite the Founding Fathers they talk ’em about ’em as a bunch of white slave owners. Now all of a sudden they’re celebrating the guys because the Republicans are maintaining their strength in Congress and not letting this renegade Trump run all over ’em.