RUSH: The Dow Jones Industrial Average is at a new all-time high today. What does that tell you, ladies and gentlemen? It tells you they’re not paying any attention to this circus. If they thought… The Dow’s up 29.71 right now. NASDAQ’s up 16.57. If the markets thought there was anything to this — and, folks, this investigation was going to result in the falling apart of our country, that the Russians are taking over — people would be fleeing the markets in droves. The market is setting an all-time high today. 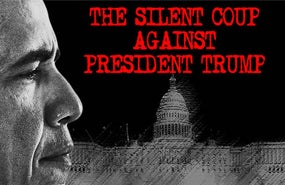 Now, some of this may be arguable, but I want to make a point here, as I swerve into where real life is happening. By that, I mean outside of Washington. I think this circus and this soap opera is beneath us. It is plain and simple what’s happening here, and that is the Washington, D.C. — and actually the global — establishment is attempting to undermine the current president. There is a very loud silent coup underway, and all of this has an objective, and that is to either paralyze the Trump presidency or to dispatch it. That’s all this is.

Everything… They say they’re worried about Russians tampering with our processes? They don’t care. They know that that’s not a big deal. They know we can outsmart the Russians. And if… We’re tampering with them too. This… It’s all amplified beyond any scope of sanity and reason. All of this concern about tampering with the law, obstruction of justice? All of it is just gigantic clouds of bogus BS — and in truth, it should be beneath us. This kind of partisanship here should be beneath the dignity.

RUSH: Meanwhile… I admit some of these items may be arguable. I want to run through the list. In the past two years… I’m going back to June of 2015 when Trump and Melania descended the escalator at Trump Tower.

In the past two years, nothing the media, the Democrats, the Washington establishment, and the Never Trumpers have thrown at Trump has worked. They have thrown everything they’ve got at Trump, and he is still there. He may not be exhibiting the same humor and charm and (What’s the word?) extroverted behavior because he is occupied by all of the assaults, but he’s still there. They haven’t gotten rid of him, and his agenda is still on the tracks.

They have tried everything they can think of to discredit and destroy the Trump presidency, from the escalator speech through the mowing down of Republican primary opponents (i.e., the Republican primary’s 16, 15 different candidates). They had “Pussaigate.” That’s the NBC video. They thought they had Trump with that. Then the lying and the polling and Russia and Flynn and all of the fake news that have been reporting. The lies, the distortions, all of the felonious and criminal leaks.

The Washington Post has minimum 30 embeds in the deep state that the reporting leaked information, and now James Comey has joined the leakers! James Comey leaked his memos he wrote about Trump. He asked a friend of his to disseminate them to the media. Can I ask a question? Maybe I’m off base on this. Maybe some legal beagle can set me straight. Can somebody tell me the difference in what Reality Winner did and what Comey did? Reality Winner had some documents from the NSA; she gave ’em to a reporter.

James Comey had some private memos he wrote about Donald Trump, and he leaked them to the media, who made news stories out of them. Both of them leaked. In one case, Reality Winner leaked stuff that wasn’t hers. Comey leaked stuff that was his. But they’re both leakers. (interruption) What? Well, the question hinges on whether it’s classified. You mean what Reality Winner leaked was classified and Comey’s stupid memos may not be classified? Perhaps. Perhaps. Maybe so. But Comey’s still a leaker, and he announced it!

Despite all this, Trump keeps chugging along. Yes, he may not have the humor he had in the campaign. He may not have the charm he had during the campaign. But he’s besieged on all fronts in ways most human beings will never experience or be able to relate to. I challenge you… Try to do this. Try to imagine you’re Donald Trump for a day and forget about the fame of it. Forget about living in the White House. Forget about being president. Just imagine every day that everybody outside the White House was gunning for you and half the people working for you are gunning for you, and he’s still there.

He nominated 11 more just fabulous conservative judges yesterday for federal districts. These 11 judges that he nominated yesterday are Neil Gorsuch quality. They are awesome, and they are crucially important to turning around the fetid direction this country is headed. As reported yesterday, Trump has slashed regulations and prevented the writing of new ones at a level unseen in our lifetimes. He is still, despite being opposed by his own party on Capitol Hill, working to try to fix Obamacare. He’s working on infrastructure.

And, by the way, Mr. Snerdley, you have always expressed total confusion over how private sector help with infrastructure would work with government. I have a story in the Stack today — I may not get to it today, but I’m gonna get to it (if I don’t) by tomorrow — that explains exactly how this is going to happen. And you’re gonna applaud it when you hear it. Trump nevertheless is working on infrastructure. He is still trying to get tax reform, despite members of his own party saying they don’t have the energy or desire to do it.

He’s working on Mideast peace. He pulled us out of the Paris climate accords! There’s not a soul who actually thought he would pull that off and go through with that and have the courage to do it, and he did it. And while all of this happening, the stock market is soaring. Consumer confidence is high. Jobs are on the creation. IBD, Investor’s Business Daily: “Trump’s Approval Drops as His Spending, Tax Cut Plans Gain Wide Support.” This is a curiosity too.