RUSH: I want to go back and revisit the David Petraeus case, ’cause I got a tweet last night. Well, I didn’t get a tweet. Nobody tweets me. I saw a tweet. Somebody forwarded a tweet to me. Some tweeter out there was claiming that Comey was in violation of the Espionage Act by releasing memos that he had written after conversations with the president, which you cannot do if they involve national security. So, you know me and Twitter, and I think you should join me in this. Believe none of what you see and half of what you hear there — and check everything. That is what I do with practically anything now, but particularly with Twitter and Facebook.

So as a powerful, influential member of the media, I have people in the know in practically every important area of life that I can call. So I did that. Except I don’t call them. I email them or iMessage or whatever. Remember David Petraeus? “Great guy! He’s the guy that came up with the surge in Iraq.” Obama loved him so much — or considered him to be such a threat — that he made him director of the CIA. Petraeus ended up… Monumental ego. David Petraeus literally thought that there was nobody in his league, and this attitude gave him self-conceived powers of almost invincibility. 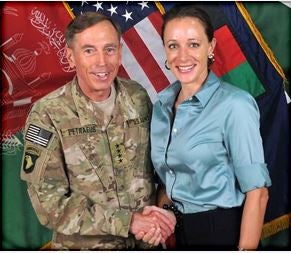 He also had a groupie biographer. The now famous Paula Broadwell — married mother of three — was his biographer. They ended up having an affair. I make no judgment on that. I’m not here to be the epitome of morality and virtue in this regard. But she also thought that the bathroom didn’t smell when Petraeus used it. I mean, it was just sheer idolatry. They came up with a very clever way of communicating so that there would not be an email trail. They used Gmail, and on Gmail… You could try this yourself if you’re having an affair with somebody and don’t want somebody to know it. The person with whom you’re having an affair or any other secret relationship, uses the Drafts folder.

You both sign in to the identity, same Gmail account; you write your emails to each other, and you leave them in the Drafts folder. They are never transmitted over the internet. And each of you log into Gmail and consult the Drafts folder to find out what the other has written, and that’s what they were doing. She was such a devoted, loyal, shall we say “follower” of Petraeus, that he began to trust her, and he had been writing memos of his meetings with Obama and Bush in order to memorialize his own greatness and his own importance and his own relevance.

And by the time he had finished with these, there were eight of them, and they were known as Petraeus’ black books (a play-off on black boxes) and he let the biographer have access to them, number one. Number two, he allowed her to keep them in a dwelling she occupied for safety and security — and, of course, her place had not been officially sanctioned as a safe house by the military or the government. So that was another violation. Letting her have access to them was a violation. Him even writing the memos, since they had obviously involved national security, was a problem — and that’s what he was prosecuted for.

There was a deal. He could have gone to serious jail time for this. Now, the reason I brought this up is I got this tweet saying that Comey violated the Espionage Act by memorializing these memos — and since he was talking with Trump about Russia and the investigation, you could say that it was discussions about national security. So I thought that looking back on the Petraeus case, if nothing else, would be interesting. Now, the nuts and bolts of this are that “the disposition of the criminal case, the U.S. attorney for the western district of North Carolina (in Charlotte)…”

The U.S. attorney there had “filed a document outlining the factual basis for the guilty plea,” because Petraeus pled out rather than go to trial and risk jail time. In “outlining the factual basis for the guilty plea — i.e., what prosecutors would be in a position to prove were Petraeus to exercise his right to a trial,” and make a decision whether or not to. Now, this document “explains that, in his tenure as commander of the U.S. and coalition forces in Afghanistan, Petraeus maintained journals: five-by-eight-inch notebooks that contained his daily schedule and notes he took regarding matters that were discussed in meetings and briefings.

“Eventually, there were eight journals in all, and [as I said] they were known as Petraeus’s ‘black books.’ As he well knew, the black books contained extremely sensitive classified information, including, according to the prosecution’s outline, ‘the identities of covert officers, war strategy, intelligence capabilities and mechanisms, diplomatic discussions, quotes and deliberative discussions from high-level National Security Council meetings, and defendant David Howell Petraeus’s discussions with the President of the United States of America.'”

That’s a key. The prosecutors had all of that that was in these memos plus Petraeus’ memorializing discussions he’d had with the president. “As is now widely known, Petraeus had an extramarital affair with his biographer, Paula Broadwell, a former Army reserve officer who interviewed him during 2011 for her fawning book, All In: The Education of General David Petraeus. On August 4, 2011, after [Petraeus] returned to the U.S. from Afghanistan but a few weeks before he took over as CIA director, Petraeus submitted to a tape-recorded interview in which Broadwell asked him about the black books, noting that she and Petraeus had never gone through them together.

“Petraeus replied, ‘Umm, well, they’re really — I mean they are highly classified, some of them. … I mean, there’s code-word stuff in there.'” So he’s detailing for the biographer the degree to which these things are top secret. “‘Code word’ is a designation for extremely high-level classified information. Even officials with top-secret clearances are generally not eligible to be ‘read in’ on national-defense secrets categorized as ‘code word.’ … Nevertheless, about three weeks later, on August 27, Petraeus agreed in an e-mail to provide the black books to” Paula Broadwell. So he transferred them out of his possession to her.

“He delivered them to her the next day at a private residence where she was staying during a one-week trip to Washington.” That’s the residence that “was not approved” as a safe house by national security agencies. “Such [safe houses or] storage areas are equipped with various protections, and access to them is tightly controlled,” but it was just her temporary residence. There were no security controls at all. “Yet Petraeus permitted Broadwell to keep the black books for three days.

“The provision of such classified information to a person not entitled to receive it is a felony violation of the Espionage Act, punishable by up to ten years’ imprisonment. Moreover, specifically with respect to revelations about covert agents,” because it contained the identities of spies, “it is a felony violation of the Intelligence Identities Protection Act (IIPA) for a government official, intentionally and without authorization, to disclose information that identifies a covert agent…”

Anyway, you compare what they did to him to what they didn’t do to Hillary after Comey’s reading her mind and claiming she had no “intent” of doing anything. They went after Petraeus like you can’t believe. They forced him into a plea deal. I’m not suggesting they shouldn’t have, but Hillary got a pass strictly on Comey’s mind-reading abilities. “I didn’t detect that she had any intent whatsoever of doing what she did.” Translation: “She just a dumb idiot! She didn’t even know what she was doing. She was trying to keep people from finding out about her daughter’s yoga lessons or whatever.”

Now you have the specter of Comey memorializing conversations with the president and leaking them. CNN’s running a banner: “Trump Claims Comey Is a Leaker.” Last hour: “Trump Addresses Transportation Department After Calling Comey a Liar.” Comey is a leaker! This is how the Drive-Bys do it. “Trump Claims Comey Is a Leaker.” He didn’t “claim” anything; he is! They make it look like it’s a baseless charge.