Does Anyone Remember When Obama’s DHS Tried to Hack the Indiana Voting System?

RUSH: Here’s Lisa in Dayton, Ohio, and I’m glad to have you with us. How you doing?

CALLER: Doing well. Nice to speak to you, Rush.

CALLER: With all these hearings and all this Russian stuff going on, they’re still floating the narrative that the Russians may have hacked our election system. The real story is that there is proof in Indiana that the NSA tried multiple times to hack the election system. And they have tried time and time again to get information as to why this occurred, and to this day they have gotten no information as to why the NSA tried to do that. It wasn’t announced to them that they were trying to check the integrity of their system. They were not successful. And I just have to wonder if this Russian hacking the election system might have been a setup to keep this narrative of, you know, trying to delegitimize the election of Trump as a last-ditch effort to try and get him out of office.

RUSH: Well, of course it was. I mean, the idea that the Russians either colluded with Trump or hacked the election is to make… If you succeed in delegitimizing Trump’s win, then everything that follows is illegitimate. His agenda, his presidency, ribbon cuttings, everything he does is illegitimate. What about this the NSA you’re saying trying to affect election outcomes in Indiana?

CALLER: They tried to hack the election system, unbeknownst to the state of Indiana. They found that somebody was trying to hack in —

CALLER: — and through a lot of legwork and research they found it was the NSA.

CALLER: This was back in January they reported it.

RUSH: I know everything, and I missed this.

CALLER: Well, I found it quite appalling and it was something that stuck in my brain. And, as a matter of fact, the secretary of state came out and was appalled at the fact that the government had tried to hack the voting system and it wasn’t like, “Hey, we’re giving you a heads-up. We’re just trying to check the integrity.”

CALLER: This was all done clandestinely.

RUSH: I have a vague… I’m gonna have to look into this. I appreciate the heads up.

RUSH: All right. “Department of Homeland Security (DHS) officials tried to hack Indiana’s state electoral system with at least 14,800 ‘scans’ or hits between Nov. 1, 2016, to Dec. 16, 2016, The Daily Caller News Foundation Investigative Group has learned. The attacks are the second confirmed IT scanning assault by DHS officials against states that resisted then-President Barack Obama’s attempt to increase federal involvement in state and local election systems by designating them as ‘critical infrastructure’ for national security.”

So Obama wanted to increase federal involvement in state and local the election systems, which I don’t have to tell you is a profound violation. You know, folks, I’m pretty confident here that the media and Democrats are gonna rue the day that they decided to base their entire opposition to Trump on the premise that he cheated with the Russians and stole an election, turned it illegitimate so that Hillary Clinton would not win. ‘Cause the more we’re learning as this story is kept alive by a bunch of desperate lunatics — the more we’re learning — is that it was the Democrats who were tampering with elections. 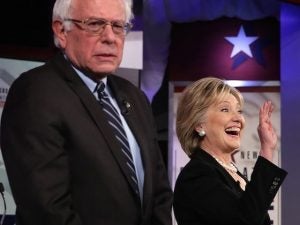 In one case, their own, the DNC! We have learned that they rigged the primary election against Bernie Sanders, and we know that this is why the DNC did not want the FBI to examine their hacked computer network and actually computers. Now, when I look at the Daily Caller story, I remember this. But our caller said it was the NSA, and that was the block. It was Homeland Security. You might say, “What’s the difference?” But I do remember Obama wanting to increase federal involvement in state and local election systems.

The way he did it… It’s a violation of the Constitution, but he called the election systems “infrastructure,” like highways, and so that would permit federal entree into state and local elections. This all happened through Homeland Security. They tried to hack Indiana’s state electoral system with 14,800 scans or hits between November 1st and December 16th of 2016. When these states… By the way, it happened when Pence was governor of Indiana. This happened because the states refused Obama’s request. They don’t want the federal government coming in here and getting involved.

You talk about tampering? Look who it is that wanted to get involved in state and local elections, where presidential elections take place! Elections are the province of the states. The feds set the day; that’s it. But the states run the elections. That’s why there are different ballots in every state, different counties, the whole nine yards. Obama wants the federal government to be involved in it. For what purpose? Uniformity? Remember Obama also wanted U.N. election observers in a couple of elections?

With the assumption being that our elections might not be legitimate. We need independent observers. I mean, this goes back to Jimmy Carter asking for such U.N. peacekeepers to analyze, protect our elections. So these states, Indiana being one, denied Obama’s request, and so Obama scans and hacks ’em, according to this Daily Caller Foundation investigative report. (interruption) What other states…? Well, West Virginia, Kentucky I think where happened. Georgia and Idaho. Their attorney generals have asked the Trump DOJ to investigate all this.

That would be a legitimate investigation. Now, if the federal government were more involved in election systems and more centralized, that would make it much easier for Russia to hack our election. Think of it this way: If Obama would succeed in effectively having federal government involvement in every state in elections, that would provide a computer link to the states, which would then be hackable. Now, the states involved here refused. But the more this goes on, the more people are… Now, this is a story that ran and few people remember it.

This caller did. And the more this goes on, the more we’re gonna learn. Look at who really wanted to tamper. Look who really did cheat and rig an election. It’s our old buddies the Democrats. And look who’s being silent about it, not making a big deal, trying to sweep it under the rug. Our old buddies the media. And, meanwhile, Trump didn’t do diddly-squat! And the vaunted FBI director has even confirmed that Trump was told three times he was not a target.

Do you remember all the media…? When Trump fires Comey, and he issues his letter, and he puts that reference (paraphrased), “Even though you insured me three times I was not a target, you’re still a dryball, and I’m still firing you.” Remember the media reaction to that? The media reaction went from, “How dare Trump? Why, that’s just silly! Look at how petty Trump is,” to, “He didn’t say that! Comey would never have told him that,” and they went and got legal experts. They got law professors. They got presidential scholars and historians to say, “James Comey would never admit to anybody that he wasn’t a target, especially this reprobate Trump.

“James Comey would never do anything of the sort.” I remember all of those stories. They were all over the New York Times and the Washington Post, and they were all over CNN, lampooning and laughing and mocking at Trump for making it up, that Comey would never violate the rules of investigations like that. “You never tell people they’re not a target! Never, never! Even if they’re not, you never tell them. Comey would have never done it,” and then when Comey’s prerelease testimony hits last Wednesday night, and he admits he told Trump!

I’m telling you, the seething got even worse, because once again, the crowd that thinks Trump can’t shoot straight was foiled again. This Trump and the media and the Democrats thing is becoming more and more like the Roadrunner and coyote to me. It may be apparent to you yet, but it is becoming that way to me. You know, the coyote goes insane every episode. He buys the latest, greatest contraption to catch the Roadrunner, and the Roadrunner outsmarts the coyote every time. It’s one of my favorite all time cartoons, by the way: Wile E. Coyote and the Roadrunner.

Everybody thinks Trump is the one who ought to be going nuts, with all this pressure, all this criticism, all these assaults, all these attacks, all this disrespect, all the people making fun of him like Saturday Night Live and all these supposedly funny late-night comedians.