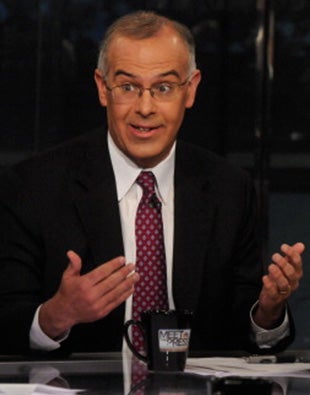 He’s been called a conservative all these years, but we kind of exposed that he’s not one. So he’s a New York Times columnist, but he’s losing his ability to stay signed up on this whole Russia-Trump collusion theory. When the left starts losing people like Brooks, who they heavily depend on… He’s supposedly a conservative, you see. He’s supposed to be a Republican, at least, if not a conservative. So we’ve got the audio sound bites. He’s written a whole column about it.

RUSH: We go to Landing, New Jersey. John, great to have you. How are you doing, sir?

CALLER: Very good. It’s great to talk to you, Rush.

CALLER: Yeah, I’ve been looking at the Democrats attacking and the news media attacking Trump over and over and over again, and I think they’re shooting themselves in the foot. Because come the next election, they’re gonna elect such a liberal, out-of-the-mainstream candidate that they’re just gonna get killed.

RUSH: Well, you know, you may have a point. Here’s what happens. The left lives in its own world. They construct their own reality. They genuinely do, folks. And then what they try to do is treat their reality — I’m talking about the media, now — they treat their reality as the nation’s reality. And so their perspective on everything is their own dominance, their own correctness.

So if they think and report that Trump is a deranged, dangerous, bullying pig, then they think the whole country thinks the same. They tell themselves that. They live in this constructed reality where everybody, everybody that they care about, all the responsible people in the country think as they do. In this way, it’s how they get shocked that Hillary lost. In their world, that just wasn’t possible.

And they also tell themselves now that despite there’s no evidence of collusion, they believe there is. They are convinced that there is so that when somebody like David Brooks comes along says, “You know what? I’m not comfortable with this anymore. I don’t see –” It shocks them. They build all of these lies. They construct all of these phony scenarios, and all of them are constructed, by the way, in this current circumstance to help them avoid actually explaining why they lost.

So their answer is a wacko candidate, a wacko, lunatic candidate. And a wacko, lunatic, leftist candidate is going to be rejected. An incompetent one is going to be rejected, like Hillary was. So I think John’s got a point. The longer they stay immersed in this, the more of a fringe, way, way out of the mainstream candidate is gonna end up being nominated by Democrats, winning their primaries or whatever, unless they rig another primary election for somebody.

But in this way I think they demonstrate how it is they who are way out of the mainstream and way out of touch with a majority of people in the country. You look at this runoff election in Georgia, Ossoff, it would take two hours to walk from Ossoff’s house to the district that he is seeking to represent, two hours to walk there. That’s how far away from the district he lives.