What the Media’s Missing: Trump’s Winning

RUSH: I want to switch gears. Last Friday on this program in my opening monologue, I took a completely different tack on the status of the Trump presidency. And many people… Well, many people enjoyed it; many people were scratching their heads, wondering what was up. My point could best be illustrated… 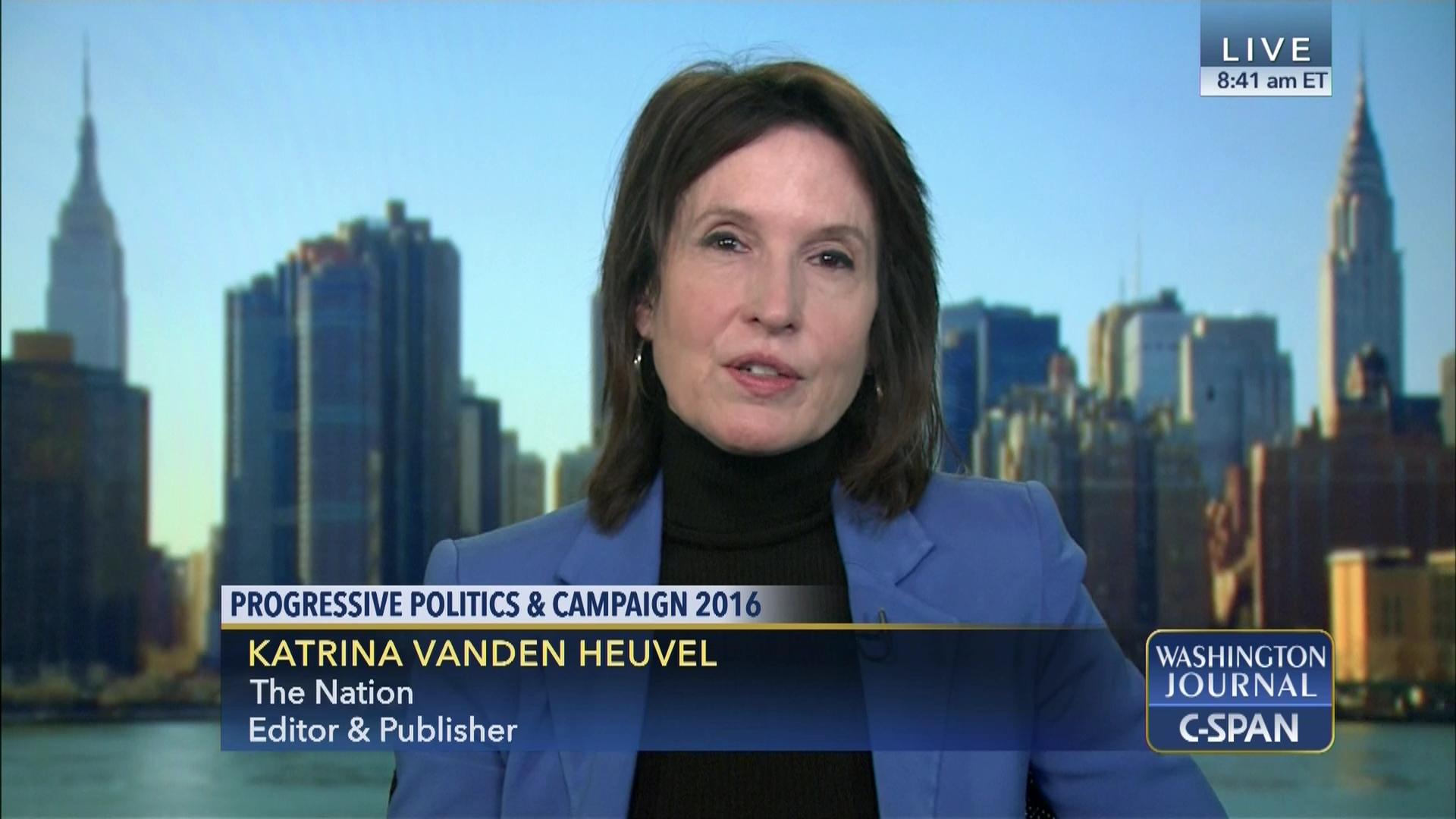 I haven’t had a chance to go through the whole roster here today. I’m not sure we have it. Where did you see vanden Heuvel, Mr. Snerdley? Did you read her or did — (interruption) A column in the Washington Post or an interview? Okay, Katrina vanden Heuvel, she’s the editor of The Nation with branch offices in Pyongyang and Moscow, and she has written a piece excoriating the U.S. media. She thinks the media is engaging in malpractice. She thinks the media is being duped and played for fools by the Trump administration every day.

She says (paraphrasing), “There’s nothing to this Russian thing, and this total focus on it is allowing Trump to implement parts of his agenda that nobody’s paying attention to. And this is why we didn’t want him elected. He had an agenda. We opposed it, and he’s implementing it.” All of this is true, by the way. Which is one of the points I tried to make on Friday.

While the media is totally absorbed in the inside-the-Beltway narrative that Trump has to go and Trump cheated and Trump is illegitimate, Trump is paying no attention to it. He’s become the biggest star in the world. Trump is employing and implementing his agenda and probably laughing every day at how the media’s missing it, and she’s not. Vanden Heuvel is not.

We had the story yesterday that Salena Zito went back out to the coalfields of Pennsylvania to find out what people who voted for Trump think, and they love him more than ever. And there’s a story that I had from yesterday. It’s a Breitbart story. “Let The Good Times Roll — Economic Optimism Surges To Record High As Trump Gets Credit For The Economy.”

In other words, I didn’t want to sit there watching TV and saying to myself, “You ought to say this, somebody ought to say this,” and I just turned it off. And after a week of it I realized that I had a much healthier and more positive outlook on life in general. It only stands to reason. If you limit the amount of destructive pessimism and negativism, if you limit that and you don’t surround yourself by it and you don’t allow it to permeate your boundaries, well, then, you’re not gonna succumb to it.

And this story at Breitbart is the story of how all kinds of people are just feeling extremely positive about the nation’s economy and the role the Trump administration is playing in it, and it’s a great, great lesson for people.

RUSH: “Economic Optimism Surges To Record High As Trump Gets Credit For The Economy.” It’s a CNBC All-American Survey. So it’s a survey from the Drive-Bys. It’s why you probably haven’t heard about it.

RUSH: From the CNBC All-American Survey. As I say, it’s a good lesson here. If you are a devotee of cable TV news and if you’re a devotee of online news, if you are a wonk — and we all are wonks here — you cannot escape the apocalyptic pessimism that is featured in the news every day. Now, the way it’s taking shape today, the apocalyptic pessimism is that Trump’s a disaster; the country’s in great peril. We are at great risk in a dangerous world being let by an illegitimate know-nothing who is placing us all at risk and whose party is killing people.

And it’s a steady drumbeat of that. It’s a steady diet, a steady drumbeat of how the country has no leadership, how we’re precariously perched here. It’s just nothing but constant negativism, and what’s happened is that millions of Americans have simply stopped watching. They just don’t watch it anymore. They don’t see anything rewarding, redeeming, informative, educational — and increasingly, there’s nothing entertaining about it. So they’ve just tuned it out, and they’re finding alternative ways of staying informed.

Let me give you a couple pull quotes from the story: “The latest CNBC ‘All American Survey’ finds that 30% of the public are both optimistic about the economy now and for the future, the second quarter in a row that present-future optimism scored so high. That’s the highest reading in the survey’s 10-year history.” Economic optimism right now, CNBC’s All-American Survey, found the highest optimism recorded in the 10-year history of this survey.

“The previous high of 23% was hit in the March 2015 and December 2014 surveys. … In other words, if you think we are living in a time of disorder and uncertainty, you may be getting misled by all the headlines about political chaos in Washington, D.C. Americans optimism is running very high on everything from the broad economy to wages to home prices to the stock market.” In other words, people that are going about living their lives and they’re not absorbing news all the time do not have a pessimistic, end-of-the-world attitude about everything.

They’re not constantly anger and enraged at whatever, and they have a completely different outlook on their life and on the future of the country. Here’s how this story begins: “While America seems bitterly divided over many political questions, the rising tide of economic good feelings that swept America in the wake of the election of President Donald Trump shows no signs of abating. And there is widespread agreement among Americans that the Trump administration deserves credit for America’s economy.”

How many of you are dumbfounded hearing this? You will not see this on CNBC, by the way. You won’t see it reported and discussed in the New York Times, the Washington Post, or anywhere else in the Drive-By Media. So you hear this and say, “That can’t be! I don’t see any evidence of this.” Precisely. You don’t see any evidence. “Optimism about the future remains very high. Thirty-eight percent say the economy ‘will get better’ in the next year.

“That’s down from 40% in April and 42% in December…” So the numbers are increasing as the Trump administration continues to count days in office. This “is well above the 25% registered in October, prior to the presidential election. It remains higher than any point since December 2009…” National optimism, economic optimism, American optimism is higher today than at any point since December 2009.

Along the same lines, CNN tries to conduct an online Trump-hater poll that turns out to be a landslide of support for Trump. This is from The Daily Wire. It is from yesterday. CNN has been on a mission to knock President Trump out of office. Failing that, they hope to discredit him with whatever they can and to render him useless, to have him serve as a president that cannot do anything because all faith has been lost. They’ve been trying to either advance the impeachment idea to force Trump out, to make Trump quit, to force the Republicans to take the trip to the White House and tell him to quit, that it can’t go on this way. Or, if that doesn’t work, just paralyze Trump.

“On Saturday, CNN openly sided with Cuba’s communist regime as it slammed Trump for rolling back former president Barack Obama’s steps to expand relations with Cuba.” That is another thing that’s happening. The Obama legacy is piece by piece being dismantled, folks. And don’t think the media doesn’t know it and they’re fit to be tied over it.

If you look at the United States, look at Obama’s legacy as a mansion and you’re gonna raze it, tear it down, Trump’s doing it doorjamb by doorjamb, knocking out window after window. He’s doing what he can without any support legislatively from the Republicans in Congress. So Trump cancels Obama’s new openness with Cuba, and Cuba comes out, rips Trump, talks about how horrible it is, and CNN sides with Cuba.

Now admittedly, it’s an online poll. But you would think, it’s CNN. The CNN audience, who are they? You know, a bunch of James Hodgkinsons. So they’re running a poll, and they’re very confident that their poll is gonna show 70, 80% think Trump should be indicted, should be impeached. And their poll shows, their own online poll, 70% think the president should not be investigated for this.

Can you imagine when CNN staffers saw the results their poll? I guarantee you that’s the last thing they thought that they would see. And then of course the tech meeting yesterday, Tim Cook, Eric Schmidt, Jeff Bezos, praised the Trump administration after their White House tech meeting, much like the cabinet last week praised Trump.