RUSH: Yeah, okay, in light of last year’s election, I’m watching CNN right now, and they cannot let go of this Russia thing. Jeh Johnson showed up today to another House committee, and he testified (paraphrasing) “Yep, there’s no evidence. The voting had no changes to it. The Russians did not change, tamper with, or affect the voting in any way. Not the casting of ballots, not the counting of ballots.” 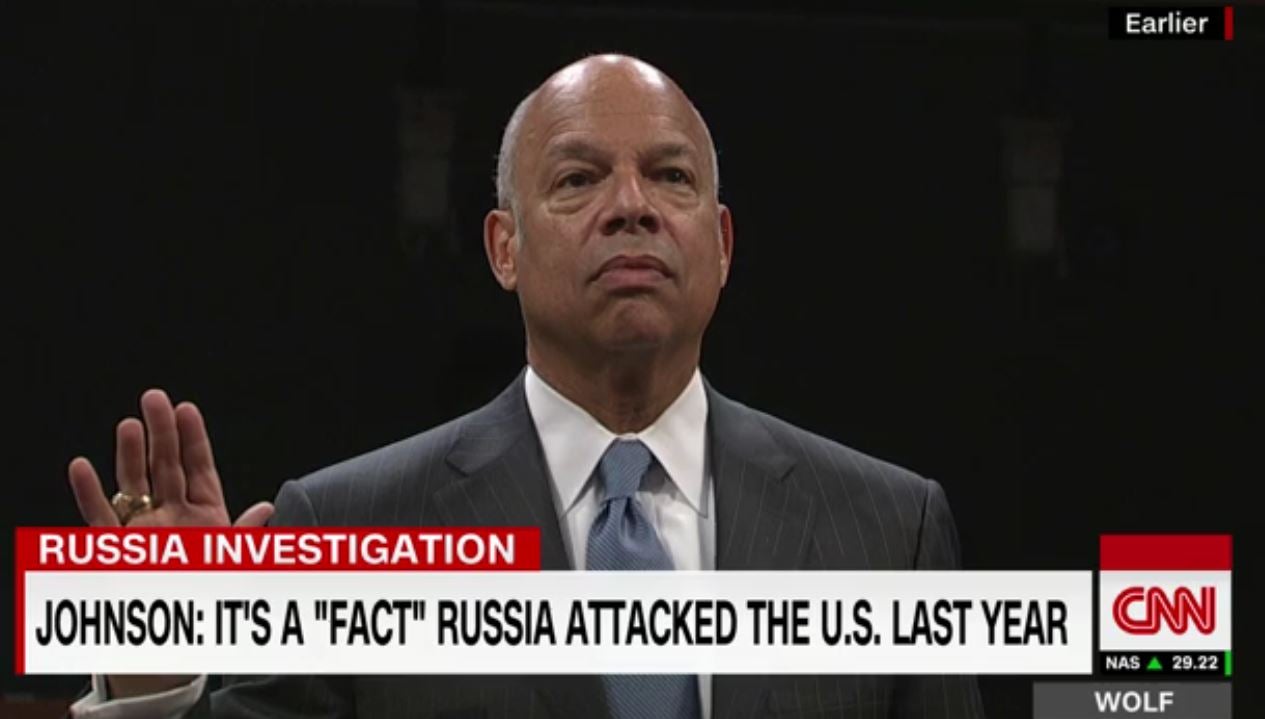 Now, in the real world with rational people, that would end this. The whole quest here has been to prove to people — by the way, which people? To whom are they trying to prove this? I mean, the media and the Democrats. They’ve been trying to prove that Trump’s election was illegitimate, the result of Russian cheating and that Trump colluded. No evidence for over a year. It did not happen. And they admit that that didn’t happen. And yet there’s a graphic, “Jeh Johnson: Russians definitely attacked U.S. elections last year.”

Do these people not realize they are dangerously close here to journalistic malpractice? This is part of the reason why their voters, Democrat voters are going insane. For a year they have been told Trump’s election’s illegitimate. Well, since November. They have been told the Trump campaign was illegitimate for a year. So eight months, Trump’s election illegitimate. In these eight months there hasn’t been a shred of evidence to prove that there was any collusion at all. In fact, there’s no evidence that the election was affected in any way, the votes, and that’s the election, affected in any way.

And yet they keep looking at, and they’ve got a guy from the Obama administration, Jeh Johnson, comes up there today says, “No question the Russians attacked our election.” Wait a minute. He just said this morning that there’s zip, zero, nada evidence of tampering with votes, with ballots, casting or counting, and yet there is CNN quoting him as saying, “No question the Russians attacked our election.”

If I were a Democrat voter, if I were a CNN viewer, and I bought into all this, I would be going crazy about now. I tune in every day waiting for the bombshell. I tune in every day, I tune in to MSNBC, I open the New York Times and the Washington Post, I read my local paper, I’m turning every page, I’m looking at Web pages, I’m trying to find it, every day I just know that they’re gonna get the evidence that Trump cheated and that Hillary should be president. And every day they get no closer to that than they were the day before, than they were eight months ago.

They keep doing hearings. They keep doing testimony. They keep reporting leaks from faceless, nameless people. And every day the readers and the viewers of these networks are desperately searching for the bombshell. And with each new day of testimony and each new witness, it is felt without doubt that that bombshell is coming, and every time there’s no bombshell. And it happened again today. Yet another former Obamaite: No way the Russians affected our election, they did not tamper with the votes, there’s not a shred of evidence.

And in the next breath, the guy says, “There’s no question the Russians attacked our elections.” Now, what he means is cyber attacks. What they’re trying to go for here, folks, is really, really in the weeds. What they’re now trying to say is that the Russian cyber attacks, the leaking of Podesta’s emails and all of this other stuff then created false news. Voters were fooled because of Russian hacking, and voters were tricked into not voting for Hillary because of Russian hacking. They can’t prove the voted was hacked and tampered with so what they’re now trying to say is that Russian hackery resulted in people being misinformed, voters! And because of this misinformation, they elected Trump!

But that’s not what your CNN viewer wants to hear, and that’s not what your New York Times reader wants to hear. Your CNN viewer, your New York Times reader is about going insane right now because it’s been eight months, and the promise has been there every day, and they want the news, they want the data that Trump cheated. They want Trump frog-marched into jail. They want Hillary put in the White House. And every day that doesn’t happen, the insane asylums need to start building new wings to house all the new residents.

It’s clear to me now, you know, this headline, “$23 Million Loss Shows Dems Have No Idea How to Win in the Age of Trump.” You know why? You know what that means? The media hasn’t found a way to destroy Trump. When the media can’t destroy the Republican, the Democrats can’t win. The Democrats can only win when the media can destroy the Republican, like they did Mitt Romney and like they tried to George W. Bush and finally did destroy him, too late, though. It was after he had been reelected in 2004. They tried to destroy George H. W. Bush. They tried to destroy Ronaldus Magnus.

They haven’t been able to destroy Trump, and they have shot every weapon they have at him. They’ve had to go to the nuclear arsenal, and that hasn’t had any effect on Trump. No wonder they’re going nuts. And when they can’t destroy the character or the reputation of a Republican opponent, they can’t win. I’m talking about national presidential races. They’re lost. No idea how to win in the age of Trump.

What is the age of Trump? Well, the Republicans swerved into nominating a guy who can’t be destroyed by the usual playbook of the Democrat Party. By the way, this is not to any special credit of the Republicans. They happen to be hapless recipients and beneficiaries of whatever Trump is. But the Democrats are totally lost. The media, can you imagine the powerlessness they’re feeling? Can you imagine the powerlessness they’re questioning? I mean, they’re able to destroy whoever they want in the drop of a hat. They haven’t been able to do it.

But this that I’m seeing today, “Russian hackers potentially targeted 21 states.” They can’t let it go. They just can’t let it go. And there’s no “there” there. By the way, when it comes to hacking state elections, it was Obama, my friends, that did it. I hate to tell you. It was the NSA going after states like Indiana, which would not allow — Obama and his regime wanted to have control over state elections. It’s unconstitutional, they made a move. Twenty-one states refused the entreaties of the Obama administration desire to have some control over state elections or the elections, period. And all of those states experienced hacks by the NSA, not the Russians. We had the story three or four weeks ago.

Now Russian hackers potentially targeted 21 states. It’s becoming pathetic. And if you put yourself in the shoes of your average CNN voter, New York Times reader, you can understand why they might be thinking about going and getting a gun. I’m just kidding, but they’re driving ’em crazy, Mr. Snerdley. They’re building up these expectations. Every day they’re building up expectations that there is evidence that Trump cheated with Putin! And that they’re on the verge of producing that evidence, and every day there isn’t any.

Imagine if your parents told you Santa Claus was coming tomorrow morning for six straight months and there was nothing there but a bunch of coal when you got up every day.