Rachel Maddow: Blame It on the Rain

It was a big deal. It was breaking news here on the EIB Network. We stopped everything. “Folks, it’s raining in Georgia-6!” Why was this big news? Because it provides either another excuse or opportunity for the Democrats, and, lo and behold, Rachel Maddow last night talking to their elections expert, a guy named Steve Kornacki.

She said, “Steve, let me ask you one last question on this. If there was a turnout effect from the bad weather today in the district, does that have any partisan implications that you could foresee in terms of what was expected for same day Election Day voting rather than the early vote?”

(imitating Steve) “I don’t know, Rachel. Is the rain conservative today because it kept Democrats at home? Is the rain liberal because it kept conservatives –” Kornacki tried to ignore the question. He said it’s only potentially a factor. But he said, “Look, you can attribute that to anything, Rachel. We’ll see if it turns out. But that’s something else obviously if you get into an election like this where it’s gonna be decided by a point or two you could blame anything, whichever side you turn up on. 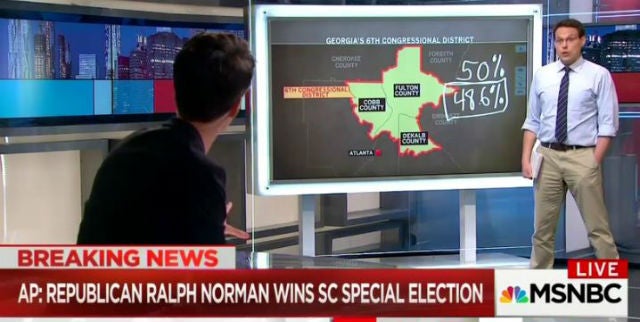 He was trying to distance himself from it. But she’s not the only one. New York Magazine, written exclusively for people on the Upper West Side: “Karen Handel Gets Last-Minute Endorsement From Weather Gods — If you had told Jon Ossoff 24 hours ago that Georgia’s sixth district was going to see torrential downpours and flash flooding on Election Day, he might not have been too worried. In fact, he may even have taken such a forecast as good news.

“The Democratic congressional candidate is widely expected to win the district’s early vote. Republican Karen Handel’s campaign, by contrast, is counting on strong conservative turnout Tuesday to put her over the top in the razor-tight race.”

“At DeKalb-Peachtree Airport, which sits in the state’s 5th District but is close to a heavily Democratic part of the 6th District, 4.58 inches of rain fell between noon and 4 p.m. Eastern Time — almost as much as typically falls in the entire month of June. But in Cobb County, home to more Republican voters, far less rain has fallen.”

This guy, Eric Levitz is his name, in election analysis points out the differential in rainfall from the district where the Democrats live to where the Republicans live in the district, and there was much more rain on the Democrat side. So, back to Rachel Maddow, there were partisan implications in the weather.