The Real Hacking Scandal: What Did the DNC Cover Up?

RUSH: I’m looking here for a sound bite of Trey Gowdy because Trey Gowdy put Jeh Johnson in his place today. Well, just one more list I’ve gotta go through. I’ll give you what he said. Jeh Johnson’s going on and on about the Russians hacking. “Yes, we know the Russians attempted to hack the election.” And Gowdy said, “If that’s true, if the Russians were hacking your network, why didn’t you let the FBI investigate it?”

You know, this is a question that needs to have been asked long before today. The Democrat National Committee computer network and system was hacked by the Russians, the Democrats are telling everybody. They would not let the FBI come in and examine it. Now, I always thought the reason was because that network contained proof of how they were rigging the election for Hillary and screwing Crazy Bernie.

Let me find the transcript on sound bite 22. Yeah, here it is, Jeh Johnson gets testy under questioning. The question from Trey Gowdy, “Russia is a career offender when it comes to attacking the foundations of our Republic.” Trey Gowdy, Republican, South Carolina. “They have a history of cyber attacks on our country. You warned before the elections they may attack our voting infrastructure. Given what we knew before the election, what more could we have done and should we have done? We weren’t surprised that Russia was doing this to us. They always do it. What more could we have done –” Wait a minute, let me see. I’m not gonna play these because time is waning, but the question, “Why didn’t you let the FBI examine your computer network if the Russians hacked it?”

He did not have an answer, and that is a question that has been lingering and should have been asked — folks, Mr. Snerdley just had an observation. I want you to think about one year ago. Go back to June of 2016. In June of 2016, the Democrat Party was considered invincible. Trump has not announced yet, the Republican field is what it is, Trump has — well, it was getting close. Well, one year ago he had. But whether we include that or not, fact is, a year ago today, people, most people thought, particularly inside the Beltway, the Washington establishment, that Democrats were invincible and unbeatable and they thought Hillary Clinton was invincible and unbeatable.

And people, many of you probably, certainly Republicans in Washington felt powerless. Obama was able to do whatever he had wanted to do. Whatever he screwed up it was never written as having been screwed up. It was thought that the Republicans were headed for years and years and years of the wilderness, Supreme Court and so forth. And in part and parcel of this is the opinion that we — I don’t include myself in this. I’m not gonna say “we” — many people thought the Democrats were just brilliant, the media was unstoppable, and they were outsmarting us, they were outstrategizing us, we just really didn’t have a chance. 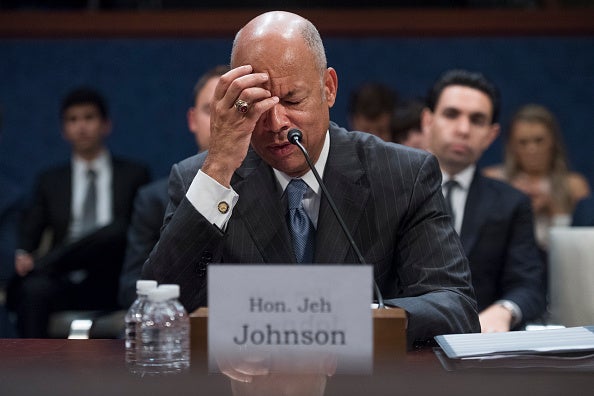 And now look at one year later where we really are. Have the Democrats really fallen that far in one year? And the answer no. The Democrats never were what we thought we were a year ago. The Democrats have never been this invincible, immovable, unbeatable force. The media has been, but they’re not on the ballot ever. But the Democrats have been trending down. I was a lone voice pointing out how they were losing elections all across America, at every level. And they have been in a downward sustainable momentum for a long time.

They don’t have an agenda of ideas that they can sell. They don’t. Our caller was right about that. That’s why they’re constantly focusing on trying to destroy Trump. Their only way back is to destroy the opposition and eliminate it. They cannot hope to triumph over this. They’re admitting they don’t know how to beat Trump. They’re admitting their brand is worse than Trump’s now. This is devastating. And this talk about, “Well, this fourth loss, this positions us great for sweeping in 2018. We’re gonna run the table in 2018. These four losses have shown us the path forward.” They are a confused bunch being poisoned by their own rage.

RUSH: Okay. Here it is. This is the sound bite. The caller mentioned this. This is Trey Gowdy, Republican, South Carolina, who is interviewing Jeh Johnson. Jeh Johnson was secretary of Homeland Security during the O administration, and the only thing here is the question, because Jeh Johnson’s answer, it’s on here, but it’s pathetic. This question has been lingering out there for a year, or at least since we knew that the Democrat National Committee computers and network was hacked.

GOWDY: If memory serves me, this was early in the summer of 2016 when we learned of the DNC hack. So if they had turned the server over to either you or Director Comey, maybe we would have known more, and maybe there would have been more for you to report. So I guess what I’m asking you is, why would the victim of a crime not turn over a server to the intelligence community or to law enforcement?

JOHNSON: I’m not gonna argue with you, sir.

RUSH: I’m not gonna argue with you. I’ll gladly let you ask me a leading question. I’m not gonna argue with you. The point of this is the Democrats are running around like stuck pigs, “We were hacked, we were hacked, the Democrats were hacked.” Okay, did you let the FBI examine your computers? No, we didn’t let the FBI examine. They went out and they hired a third-party forensics unit called CrowdStrike. CrowdStrike is headed up by a Ukrainian — in America, but a Ukrainian who hates Putin. And it was CrowdStrike which claims there were Russian fingerprints all over this.

Well, hell’s bells, if you’re gonna hack the DNC, why leave your own fingerprints? Then we learn later the CIA had hacking programs that left fingerprints of anybody you wanted. If you wanted to hack, say, the computers of Bill Nye the Science Guy, the CIA program would let you leave Chinese fingerprints in there to make Bill Nye the Science Guy think the ChiComs are hacking him. So we don’t know who hacked the Democrat computers. That’s the bottom line, or their network. We don’t know. We have to take the word of their third-party forensics investigator, CrowdStrike, because they would not let the FBI have it.

I’ll tell you, as I’ve said over and over, I think because we have learned that the Democrats rigged that primary for Hillary. There was never a chance Crazy Bernie was gonna win that nominations, no matter how many delegates he picks up, they had it rigged. That’s why they didn’t want law enforcement finding. Can you imagine if that had entered this mix?

All this talk about the Russians this and the Russians that, then the FBI investigates the hack and they find out that Debbie “Blabbermouth” Schultz and the Hillary campaign had worked to stack the deck against Bernie, you think that that would make the story instead the Russians stole the election for Trump? That’s why. At least that’s my two cents.