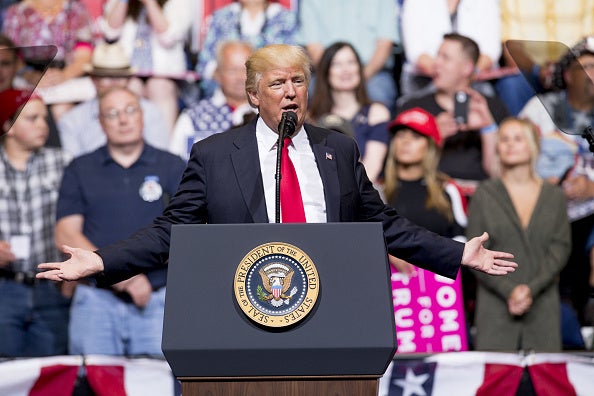 If you saw this rally last night or if you’ve read anything about it, you know, I’ve spent many, many hours on this program attempting to explain to anybody who’s interested — Never Trumpers, liberal Democrats, anybody who really wants to know — I’ve done everything I can to explain the connection between Trump voters, Trump supporters, and Trump. It was on display last night. And all you needed, if you really want to seriously analyze it, is an open mind.

There isn’t anybody in politics who can do it because politicians just don’t develop these kinds of connections with voters. I guess it’s happened. I mean, it does happen. I shouldn’t say there aren’t any, but it’s really rare in the world of politics, and stop and think about that for just a second. In the case of liberal Democrat politics, what are they known for? Giving things away. They are known for giving things away and getting even with the opposition.

And even giving things away, playing Santa Claus, does not build a personal bond between the recipients and the givers, i.e., the Democrats. What it has done has created an angry expectation on the part of the recipients who’ve been promised all kinds of good stuff that never materializes so they’re constantly angry.

And here’s Donald Trump who’s not giving anybody anything other than what he said he’s going to do, and people camped out overnight. CBS News actually sent a reporter, Dean Reynolds, he got a visa, and he went into Iowa, and he wanted to find out why. What in the world would make you show up an hour or a day before Trump’s supposed to speak and get in line, camp out here overnight. They could not fathom, could not fathom why anybody would do it.

He would not question if somebody lined up for an Elvis concert or Beatles or take your pick, new iPhone, he wouldn’t question that because he doesn’t see this in politics. He doesn’t see voters lining up an hour or a day beforehand to get in. In Dean Reynolds’ experience with Drive-By Media, they handpick the recipients at a town hall or at a rally to make sure they’re friendly to the Democrat speaking, but they have to go out there and they have to find them.

RUSH: Maggie Haberman, used to be at Politico, now at the New York Times, she was in Cedar Rapids. She tweeted, “People in the stadium were thrilled with Trump. They believe he’s trying to do good things and angry at the press, one after the other. And there was no talk of Russia.” She was shocked. In an arena of Trump supporters she was surprised that they were thrilled with Trump, that they think he’s doing great things and that they were angry at the media. And she couldn’t believe that Russia was not a factor to them. Which takes us to Dean Reynolds, CBS News. He was in Cedar Rapids. This is a place people lined up the night before to be able to get into the Trump rally.

REYNOLDS: They call themselves Front-Row Joes. Trump supporters so steadfast, they camp out for hours, even days ahead of a presidential appearance. Cindy Hoffman lives about an hour from Cedar Rapids. “And you’ve been here for how long?”

HOFFMAN: I got here yesterday about four o’clock in the afternoon.

REYNOLDS: Will this be the first Trump rally you’ve been to?

HOFFMAN: This is gonna be my 12th.

RUSH: Twelfth rally, and you got here a day early? Reynolds couldn’t believe what he was hearing. I don’t know what they’re expecting to hear. Yes, I do. I do know. They’re expecting to hear Trump people mad at him, ready to abandon him, he’s let them down, he isn’t getting anything done, he’s embarrassing them. That’s what these Drive-Bys think, because, remember, whatever they think is what everybody else is thinking, in their alternative reality. Here’s the next sample.

REYNOLDS: Democrats may shake their heads.

REYNOLDS: But the views we heard today helped to explain a kind of dogged devotion, including what Austin Bayliss thinks of all the investigations targeting the Trump administration.

REYNOLDS: Does he act like a man or sound like a man who has nothing to hide?

BAYLISS: He sounds like a man that can’t get his thoughts through the media.

REYNOLDS: A view shared by Randal Tom. Listen, do you think I’m making it up?

TOM: Depends on what show.

TOM: Oh, CBS. Well, you know what? You have a lot of slanted stories, honestly. 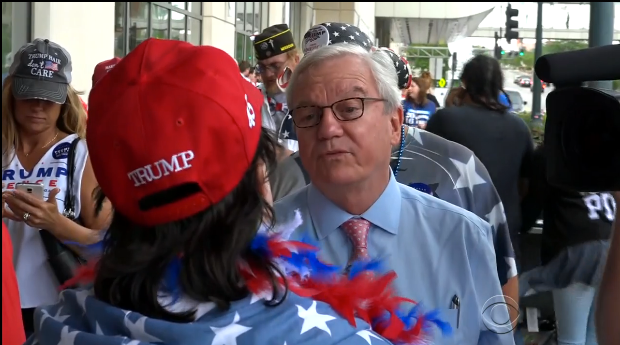 RUSH: The reporter says, “Do you think I’m making it all up?” “Well, it depends. Depends on what show.” He says, “I’m CBS.” “Oh, you’re CBS. Well, you know what, you have a lot of slanted stories on us on CBS.” And we have one more. It’s two years now, and they still can’t comprehend the bond between Trump and his supporters.

REYNOLDS: They applaud Mr. Trump’s fight against his perceived adversaries. Do you think it was smart for him to get rid of Comey?

REYNOLDS: What about Mueller?

MAN: He needs to go.

REYNOLDS: And Danielle Miller says the president has put the strut back in America’s step, despite what others may see, as stumbles.

MILLER: Look at our relationships with the rest of the world now. They respect our president. He’s representing us.

REYNOLDS: Now, they have all taken their seats here tonight eagerly awaiting the arrival of the man who won Iowa by 10 points in November. They express little interest in current polls, which show a softening of support for Mr. Trump because they know their support for him is strong.

RUSH: Right. They still don’t understand it, they never will. I have spent the better part of two years, off and on, trying to explain this, and either they hear it and it doesn’t register or they’re not hearing it. It’s unique. As I say, there’s not a politician — and this is why — there’s not a politician that has this kind of connection with voters. In fact, it may not even be possible for a politician to. But Trump isn’t one, you see. Looking at the clock, and I have to take a break.