Do We Want to Save Nancy Pelosi?

RUSH: Here is Andrew in Lexington, Kentucky. I’m glad to have you. You’re up next. How are you doing, Andrew?

CALLER: Thanks, Rush. I appreciate you taking my call.

RUSH: You bet! My pleasure.

CALLER: I wanted to talk about the 6th district election over in Georgia.

CALLER: So I was looking into this, and Pajama Boy Ossoff spent $23 million on his campaign, right?

CALLER: He won 124,893 votes. Well, if you look in 2016, when Tom Price was running against Democratic candidate Rodney Stooksbury?

CALLER: Stooksbury spent all of $0 and won more votes than Ossoff did in the election.

RUSH: This is true. This Stooksbury guy, nobody even heard of him. Nobody even gave him a chance. He didn’t even campaign. He was a placeholder. It was thought that Price was gonna win this thing by 20 points, and he did. But Stooksbury still got more votes than Ossoff did spending not a dime.

CALLER: I just can’t believe it. This is the most expensive race in the House in the history. They couldn’t even muster up more votes than a guy who didn’t spend a dollar?

RUSH: No, no, no. It was a victory. You’re misinterpreting this. This is a win. This set them up! Along with the three other defeats in the special elections, this set ’em up to sweep and take the House in 2018. This showed them the way forward. The money was well worth it, the Democrats said.

RUSH: The caller is in stunned silence. He probably thinks I’m joking. I’m not. That is what they said, Andrew.

RUSH: (interruption) Help save Nancy Pelosi? I don’t know. Let me think about it.

I don’t think there’s any question about that. Snerdley is devoted to Pelosi staying where she is, prominently as she can be because of her, quite frankly, beneficial aspects to us. (interruption) Snerdley is now saying, “I have to say…” Is she in that great…? (interruption) Well, I know some of them are. I know some Democrat congressmen are unhappy, but she’s mounting a good defense. She’s out there saying she’s very needed, that she’s one of the best shepherds of legislation there is. She’s fighting back against these people.

She’s not going away. I don’t know. I hadn’t even thought about it. On the scale of things that are important to me today, Nancy Pelosi doesn’t register, and now that you’ve made me think about it, you’re actually ruining the day, ’cause you’re right. I have to think about this. It is funny when we see liberal-on-liberal crime like Jeh Johnson on Debbie “Blabbermouth” Schultz yesterday. And I kind of like that, the longer that can go on.

But what’s always fun to factor is, if we mount a major campaign here like we did with Operation Chaos, to save the Hillary presidential campaign in 2008… We extended Hillary’s campaign by three months, minimum. I’ll tell you why. If you weren’t here, it was called Operation Chaos. The Republican primaries were over. McCain had already wrapped it up. So there was no dram on the Republican side — and (chuckles) there wasn’t any excitement, either, since McCain had gotten the nomination.

People on you are side were down in the dumps and depressed and we had to do something about that. The Democrat race was still underway. Obama was ahead. Hillary still chance. There was a debate over superdelegates, but there were some open states remaining and I encouraged Republicans in these states where their votes didn’t matter (because McCain had already been chosen the nominee) to switch parties or go independent and vote in the Democrat primary in Indiana… I forget the other two or three states.

Pennsylvania was one, Indiana. I encouraged people, Republicans, to cross over and vote for Hillary in the Democrat primary, and then after that come back and reregister Republican just to sustain the Democrat campaign in order for the entertainment value to continue providing material for the program, ’cause we’re talking February here. February, March, and McCain’s already wrapped it up. So we had Operation Chaos, and her campaign lasted ’til June, and it was arguably… Operation Chaos played a role. It was such a big role, George Clooney made a movie about it: The Ides of March.

One-third of that movie is about Operation Chaos, how it panicked the Democrat Party. So we showed him that we could actually be a factor in the Democrat election apparatus. Could we do it again? You know, when you go back to the well… Once you do something, leave it alone. Don’t try to repeat it or do it again. That’s common, standard, not just broadcast, but entertainment world theory. So should we go back and try to save Pelosi? 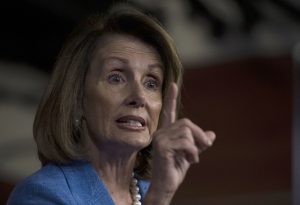 RUSH: My friends, it is the children in the Democrat Party that want to get rid of Pelosi. It is the young elected Democrats, people that generally support Crazy Bernie. The headline is a Fox News story: “inside the rank-and-file, members are getting restless and the call for Pelosi to depart is louder than ever. ‘It’s as real as it gets,’ one House Democrat told Fox News. ‘I’ve never seen people this torqued. She’d be out if there was a clear plan in place for [succession]. The question is, where does this end?’ ‘The problem is that you can’t replace somebody with nobody,’ said one senior Democrat close to Pelosi.”

Pelosi’s out there saying (paraphrased), “You can’t get rid of me. I’m too good. I’m too important. I’m too talented. There’s nobody that manages legislation better than me. You can’t get rid of me. Screw you!” She’s not gonna go. You’re gonna have to drag her out of there, throw her out of there. You’re gonna have to… What else is she gonna do? Go back out to San Francisco and join an arts and crafts fair and start painting pictures of Golden Gate Bridge? It isn’t gonna happen. This is… I mean, she’s a singular thing from which she draws her identity. She has to have a channel for her hatred. All the Democrats need it. They’re the biggest hate group in the country right now, and they need to be able to channel it. And for many people that’s what politics is, a way to channel and direct and project their hatred.