RUSH: Grab audio sound bite number 23, and I’m looking… (sigh) Yeah, just number 23. This just happened this afternoon on HLN. Well, that’s CNN. That’s Headline News, right? Channel 204 on DirecTV. Okay. So there’s a fill-in host out there on Headline News, Susan Hendricks, and she’s speaking with a satellite radio host by the name of Pete Dominick. Do you know who Pete Dominick is? (interruption) They’re talking about Johnny Depp’s comments suggesting that Trump should be assassinated. Depp suggested he would do it. Now, Depp says he was joking. They all say that after they get caught.

Now, the fill-in host, Susan Hendricks. Have you ever heard of her? Do you know who she is? (interruption) Okay. Well, she said, “Let’s be honest. When Lincoln was assassinated…” Oh, that’s what Depp said. “You know the last actor to assassinate a president?” (cheering “Yeah, John Wilkes Booth!” He goes on to compare himself to John Wilkes Booth. I’d forgotten already. So the question, “Let’s be honest. When Lincoln was assassinated, the assassin was an actor on the stage. Johnny Depp can now reach millions of people” at his little music festival there in the U.K. “He’s part of Disney franchise” with these pirate movies. “So [Depp’s] words are much more serious” than anything, say, John Wilkes Booth could have said back in the day. 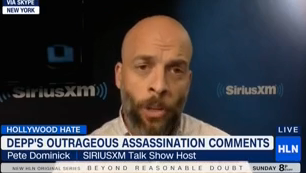 DOMINICK: — that say these kinds of things —

HENDRICKS: He may not influence you, but there are people out there like James Hodgkinson, who did open fire at a baseball practice, and Steve Scalise almost died if it wasn’t for the congressional police officers there.

DOMINICK: I mean, I’m sorry, but James Hodgkinson didn’t, uh, try to assassinate Republicans because he was a fan of 21 Jump Street or some actor or —

HENDRICKS: I know, but words from —

HENDRICKS: — someone as famous as Johnny Depp could affect people out there and influence them. 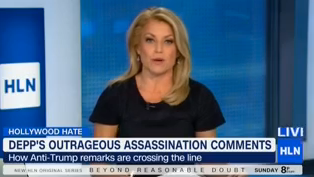 RUSH: See, this is fascinating. They’re trying to argue that Depp as an actor saying he wants to assassinate the president, nobody takes it seriously. And then this clown comes back and says, “Hey, Hodgkinson didn’t do what he said because of 21 Jump Street or some actor or comedian.” He sure as hell did! You can’t escape this. This guy loved Rachel Maddow, he loved Bill Maher, he loved that John Oliver clown on HBO. He loved all these people! Take a look at what he wrote in letters to the editor. I mean, there was nothing original about this guy.

He was a plagiarist of the first order. Notice how conservative names like me and Hannity come up. (interruption) Well, I know, Susan Hendricks came… I mean, she’s… This is a position she took that would seem to be at odds with what they want at CNN. She seemed good. But I think she’ll have a job. (interruption) Yeah. No question about it.