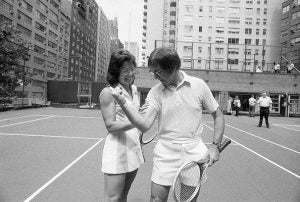 RUSH: I got a couple of other things I want to do, but first grab audio sound bite 21. I love it when leftists get in trouble with political correctness. I just love it. It entertains me. And the latest victim is John McEnroe. John McEnroe is in trouble because of something he said about Serena Williams. It was Sunday on NPR’s Weekend Edition Sunday, and the host was Lulu Garcia-Navarro. She’s interviewing McEnroe. He’s got a new book out, so he’s showing up everywhere trying to sell it. Guys don’t know if they want to sell a book, get a copy of it to me.

But, now, tennis… Tennis has been having this argument since the days of Billie Jean King and Bobby Riggs. “Are women just as good as men in tennis?” “Could the best female player beat the best male?” Of course, in these current days of feminism, “Yes! There’s no difference.” Of course, McEnroe didn’t get the memo. So they’re talking about the great players of today’s game, and Lulu Garcia-Navarro says, “Let’s talk about Serena Williams. You say she is ‘the best female player in the world,’ in the book. In your book, you say she’s the best female player.” Now, this bite’s seven seconds. It goes by quickly. Here it is…

NAVARRO: Why qualify it?

MCENROE: If she played the men’s circuit she’d be like 700 in the world.

WILLIAMS: The men are a lot faster, and they get… They serve harder; they hit harder. It’s just a different game.

RUSH: In other words, McEnroe’s right, but that won’t matter.