RUSH: The witch hunt, the witch hunt. They are going after Trump’s bodyguard now, a guy by the name of Keith Schiller. You have seen this guy. If you’ve ever watched a Trump rally, if you’ve ever watched a Trump entourage get off either Trump’s plane or Air Force One, he’s the gray-haired, very tall. You wouldn’t want to run into this guy alone. Keith Schiller. He’s a former NYPD cop. He’s been Trump’s personal security head honcho and bodyguard for the longest time. 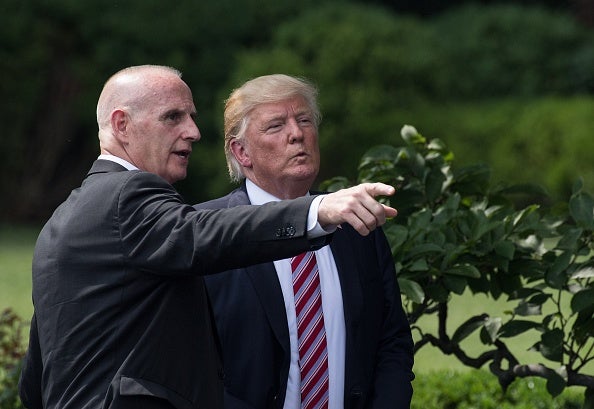 And, in fact, I wondered what was gonna happen, Trump won the election, you know, Keith Schiller is not Secret Service. I wondered what they were gonna do. They created a new position for Keith Schiller: Executive Director of Oval Office Operations. And that’s his job. He’s Trump’s security guy. He’s Trump’s body shadow, and he goes everywhere. He gets off the plane first. He’s the first to enter the room, including the Oval Office.

He is the last to leave the Oval Office after Trump leaves it. He battens it down and makes sure it’s secure. Keith Schiller. And it turns out here now, ABC News reporting that the House witch hunt is going to question Trump’s former bodyguard — well, he’s still there, Keith Schiller. It reminds me when CNN tracked down Trump’s former butler. You remember this?

They found a former butler at Mar-a-Lago, and they made the classic mistake: They didn’t ask the guy off camera first what he was gonna say. They just assumed that an ex-Trump employee would be dishing all the dirty details. And instead this butler just sang Trump’s praises, to which the media then began speculating that Trump had paid him to do so. But, I mean, the bodyguard? They’re calling Trump’s bodyguard over the Russian collusion story?