I Just Got Favorable Coverage on Headline News — and It Makes Me Nervous!

RUSH: I have a sound bite here; I was just made aware of it. You know, I was trying to tell somebody this morning — it was Mr. Snerdley — I don’t know how to behave when I get favorable press. I almost get nervous. This is hard to explain. My experience with the press is that it’s always negative, cutting, attempting to damage. It’s unfair. Most of it’s untrue. But it’s always an attack. I have just grown accustomed to it. Like, I would never be comfortable as a liberal getting fawning press. It just wouldn’t seem natural — and when I do get it, it’s very, very rare. And when it happens, I feel… I don’t know. It doesn’t feel genuine.

I don’t quite know how to explain this. It’s not that I have been so conditioned to only… It’s that fawning or positive coverage, for some reason… It’s not… I was going to say it embarrasses me. That’s not what it is. But, anyway, it happened here on CNN on Headline News. One of their commentators is John Phillips, and Erica Hill is the host of this particular segment on Headline News. She was speaking with this guy, John Phillips, one of their contributors, about Trump’s tweets about Scarborough and Mika Brzezinski. She says, “This is not about politics. This is not about presidential behavior. At the end of the day, John Phillips, this is about behaving like an adult. Full stop. … Is he behaving like an adult?” 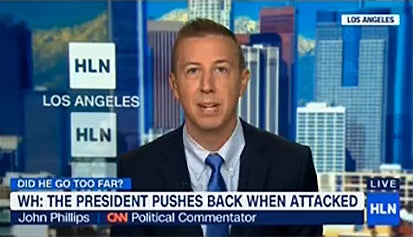 PHILLIPS: I would dispute the description of Mika Brzezinski as a “news anchor,” which is what I’ve been hearing all morning. She’s a liberal talk show host, and politicians attack talk show hosts all the time. Let’s not forgot, Al Franken wrote a book called “Rush Limbaugh is a Big, Fat Idiot.” President Obama told Republicans to turn Rush Limbaugh off if they want to get along with him. Harry Reid called him “unpatriotic.” So throwing bombs at talk show hosts that come from the opposite side of the political spectrum is not something that’s new, even when looks are attacked as we’ve seen with Rush Limbaugh.

RUSH: He’s exactly right, and the Harry Reid thing is what’s really fascinating, that whole phony soldier thing. I don’t have time to detail it here now for those of you don’t know what it is. But he’s exactly right. I have been talked about by presidents and senators the way Trump is talking about Mika and Joe, and nobody… All the others, they piled on and applauded. They applauded Obama. They applauded Franken. This guy has a good point.

It still makes me nervous.

RUSH: Hey, let’s not forget the big one. How about when Bill Clinton accused me of being responsible for the Oklahoma City bombing? Do you remember that? How many people called Clinton out on that? There was nobody. The Drive-By Media was all supportive, ran the story. They might not have promoted it, but they didn’t condemn it — and, of course, it was absurd. And he did it in a speech at a memorial in Oklahoma City. (impression) “Angry voices on the right are speaking out about Big Government and you see what happens!”

And when he was called about it later said, “Oh, I wasn’t talking about Limbaugh! I was talking about the Michigan militia shortwave network.” So I’ve even forgotten these things. When something like this happens, these Trump tweets, I don’t even remember these things until people call my attention to it. Although I did remember the day Obama was telling the Republicans to stop listening and talking to me, that’s not how things get done. (chuckling) What Obama didn’t know was they weren’t listening to me.

They wouldn’t have been in trouble if they had been. But Obama’s one of these classic leftists that think that talk radio is running the Republican Party, or was. But, yeah, I’ve had every insult you can imagine thrown my way, and whenever there’s anybody who comes along and chastises the president or the senator, whoever does it — Harry Reid and that phony soldier business? Boy, did we turn that around on them. That’s one of the highlights of this program. But, look I don’t have time to get into it now, there’s too much going on.