Russian Hack: Democrats Haven’t Been This Mad Since Lincoln Freed the Slaves

RUSH: The Russian situation and all that continues to cause a huge meltdown all throughout the Democrat Party. Folks, let me tell you something.  The Democrats have not been this mad since Lincoln freed the slaves.  I’ve never seen anything like this.

RUSH:  The Democrats are in hysteria.  The Democrats are now demanding a 9/11-style special commission to probe Russia.  What am I telling you about they cannot accept reality, folks?  Seriously, I’ve never seen ’em this mad, the Democrats, since Lincoln freed the slaves.

RUSH: I think what’s happening… You look at this story I mentioned here right before we went to the break top of the hour. This is from Reuters.

“Democratic members of the U.S. Congress called on Monday for the creation of an independent commission to investigate Russia’s attempts to intervene in the 2016 election,” and they want it to be like the 9/11 Commission.  What they really want is Watergate-style hearings.  What they really want is to put somebody on trial for what happened.  And again, look, I don’t mean to be a broken record.  I just have learned that it takes repetition.  Even if you’re writing, it takes repetition for something to drill down and be understood, to be remembered.

And this inability to accept reality, to me, I think is so important, because many people on the right are constantly trying to figure out how to deal with, how to do battle with, how to beat the left, how to understand them. And it is never understood properly because we assign to them the same characteristics that we assign to ourselves, which is understanding, reason, commonsense, acceptance. They have none of that.  So our efforts to build bridges to them for common understanding and so on always will fail.

Because if you look at this demand here for a 9/11-style commission, what is its root?  Its root is that they can’t accept that they lost.  In their minds, they didn’t lose.  Reality is that they got snookered, folks.  They were schlonged in the Electoral College. They were schlonged.  They were defeated.  There’s no question about it.  But not to them!  To them, that is a construct.  The majority has put together this set of circumstances that resulted in Trump winning, but it isn’t real.  So they want hearings to expose whatever the construct is.  They want hearings to find out who did this.  And in their minds right now, it’s the Russians. 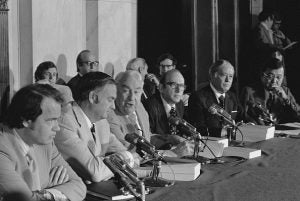 It’s the Russians working together with Trump.  That’s what they hope to uncover.  They want to find the link between Putin and Trump that ended up defeating them.  That’s what they think exists.  So they live in an alternative universe.  They do not live anywhere near reality.  They’re unable to accept reality because there is no reality to them.  In this case, they got snookered.  You know, I actually think if you put yourself in their shoes right now, I’m watching these Sessions hearings, and a thought came to me.

I look at the New York Times front-page story today on Sessions, as I mentioned, and it’s a puff piece.  This is so, so extraordinary. So out of character.  Normally on a day like this, the New York Times would write a piece savaging Jeff Sessions, and they would bring up every false allegation ever made about the guy, and they would try to pass it off as real. And the allegations would be rooted in that he’s a secret member of the Klan, that he’s a racist pig, that he hates minorities.  This would normally be what they did.

But today they write a glowing puff piece.  Now, the reasons are clear to me.  They realize they can’t stop him so they’re holding their fire. They’re keeping the powder dry, so to speak, and they’ll launch this other stuff after he’s confirmed and when they’re about to do something in the Trump administration that the left doesn’t like, then they’ll try to sabotage it and stop it.  If you look at the hearings today… We had a caller, “Rush you’ve always said that the liberals, when they’re in power, are dangerous; when they’re out of power, they’re funny.  Don’t you think they’re pathetic right now?”

And the caller has a point, ’cause I’m watching these hearings today, and it was pitiful.  It was pathetic.  They launched their best ammo.  They launched the tactics that have always worked for ’em.  They had Code Pink in there.  They had people dressed up like members of the Klan.  They have some group of black activists somewhere doing a sit-in at one of Sessions’ offices. The stuff that always works for them, the stuff that has always garnered them favorable media coverage, the stuff that has always successfully been implemented to frighten and scare Republicans into cowering in the corner.

None of it’s working — and in many ways, it’s all they know.  They don’t know how to prevail on ideas, because they can’t.  Their ideas… There was another poll I saw, by the way, when I was away.  And it’s not new.  It is that self-identified conservatives equal 35% in America, self-identified liberals 26%.  And that’s been the case (plus or minus a couple points either way) for 30 years.  The liberals are not the majority, at least when you ask people to self-identify.

Now, in their minds they are the majority, but they know in their minds they can’t win in ideas because they don’t have the support of enough people for their ideas.  Folks, this is something we can never forget.  This, in fact, is what we were all questioning during the eight years of Obama.  We’re sitting here, “Have we finally been overtaken?  Have we lost the country?  Do people actually agree with this garbage?”  It turns out they didn’t.  They didn’t have the guts to say they disapproved of Obama, but if you’re asking them about his agenda, a clear majority disapproves of his agenda.

When you put him in the question they will not go negative because of race, I’m sure.  But the fact of the matter is, they are a minority, and that didn’t change in the eighties.  They were able to make themselves look like the majority with the assistance of the media and a successful cowering by the Republicans.  I mean, it infected everybody. So many of us were asking, “Have we lost the country, are we officially outnumbered?”  I can’t tell you the number of people I know who thought that we had finally lost the country, that we were outnumbered.  And we aren’t.  And when you get right down to it, other than the state of California and New York, we’re not even close.  They’re not even close.

So the tactics that they have used, they never triumph with superior ideas because theirs aren’t.  They triumph via bullying.  They triumph with — well, phoniness.  I mean, look at gay marriage.  A majority of people in the states, when referendums came up, opposed it.  But the Supreme Court comes along and says it’s constitutional and so it’s the law of the land.  But it is not supported by a majority of the American people.  In that way, it’s forced on everybody, same thing as Roe v. Wade, it’s forced on everybody, it’s made to look like the American people support it, when they don’t.

So the left is in a situation here because they’re up against somebody they don’t know how to deal with, Donald Trump.  Donald Trump’s not an insider, he’s not a typical Republican who cowers in fear at all of their attacks.  If you’re a Democrat, if you’re a liberal Democrat, you have to have some things in your mind, that the Republicans are gonna always cave. All you have to do is call them racists or sexists and they’ll cave. That all you have to do is call ’em people that have no compassion, whatever it is, and their experience is the Republicans cave, and the experience is you can bully your way to power.

And then once you get there you can put all kinds of your people in these cabinet level positions, these regulatory agencies, unelected regulatory positions so that they continue to implement the liberal agenda even though they haven’t been elected to do it, it makes it look like they’re a minority when they’re not.  But when they have to win with ideas, they can’t; and it’s on display right here in the Sessions confirmation.  They’re overmatched.  They come at Jeff Sessions in the way they always go after Republicans.  In fact, they’re even pulling back on that because they know they don’t have the votes.

So they’re going through the motions of trying to categorize Sessions as a former Klan member in hiding or a racist or what have you, but that’s even half-assed.  They can’t beat Sessions debating the Constitution.  They can’t beat Sessions by discussing the Constitution or making him look like he doesn’t believe in it because they’re the ones that behave outside it. So their natural tendency is to bully and to threaten and to allege and to accuse, and that isn’t working.  It’s not intimidating. 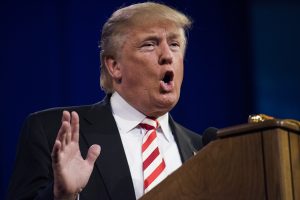 Like Meryl Streep.  People are laughing at Meryl Streep, except Hollywood people.  People are laughing at her, or they’re telling her to shut up, or we’re tired of it, we don’t want to hear it.  Code Pink, that’s not changed anything in there today, didn’t change anybody’s mind.  An association of black activists with a sit-in at Sessions’ office is not changing anybody’s mind.  And this is all they’ve known.  They can’t win with ideas.

I actually think that they’re depressed.  If you could drill down into the pit of the soul of each of these leftists, you would find that they’re in utter panic and in a deep depression.  ‘Cause they can’t stop anything the way they’ve always been able to.  Not now they can’t.  That doesn’t mean they’re gonna give up and go away.  That’s my whole point; they’re not.  But they do look pathetic.  They look outclassed.  I mean, to watch Dianne Feinstein, it was pathetic.

Dianne Feinstein in her opening statement on Jeff Sessions bringing up Roe v. Wade and clearly trying to say that Sessions was gonna force women to the back alley, nobody’s buying it.  That’s not who the guy is.  They get away with lying about people and mischaracterizing ’em and the media piles on and helps them.  The media didn’t pile on and help ’em with Sessions today in the New York Times.  So I think that they’re trying to figure out what happened and since they’re in denial, since they have not come to grips with the fact that they have been rejected — and, by the way, nobody wants to think that.

Nobody wants to think they’ve been rejected either in a personal relationship, at work, wherever, nobody wants to feel rejected.  And that’s something that whenever it is happening to you, you’ll try to convince yourself that it’s anything but rejection.  Rejection’s so utterly personal and they have been rejected.  They have been politically, policy-wise, rejected, after what they think is the historic presidency of Obama, the hope and change, greatest president ever, and then Hillary to follow, and all of that’s been rejected.  And they haven’t come to grips with it.

So, there has to be a reason this was stolen from them.  So they want these hearings now.  And, in fact, from The Politico, this headline:  “Former Clinton Campaign Manager Compares DNC Hack to Watergate.”  This would be Mook.  “Hillary Clinton’s former campaign manager wants America to take cybercrimes more seriously, writing in The New York Times that the effects of such crimes –”  I told you, they want Watergate-style hearings.