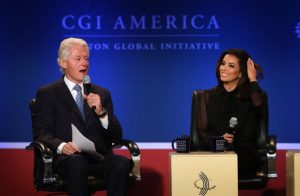 The Clinton Global Initiative happened at the same time. Usually it was the week before, sometimes the week after. The Clinton Global Initiative was originally established to help resuscitate Bill Clinton’s reputation after he left office. Of course, the “engraving,” if you want to put it that way… The engraving on the Clinton presidency is two words: Monica Lewinsky. So Clinton was trying desperately — and Hillary, too, ’cause she was setting up her own presidential run. They wanted to do what they could to overcome that and erase it.

Nothing was ever done. It was like Obama’s workshops in the White House. Remember those, his first month in office? He’d bring in workshops of four or five different groups of people and give them each a corner of the room and solve unemployment or solve climate change or solve the problem of fossil fuels. And they’d worked all day, then report to Obama at the end of the day. Problem solved. Of course, nothing had been done but a bunch of people sitting around in the room thinking they’re important and that they matter because Obama’d had them in a work group in the White House.

The Clinton Global Initiative was much the same thing. It gave Clinton an excuse to come to New York and go out to dinner every night, and the chick magnet aspect of it happened. I witnessed that firsthand. I witnessed that. I’m not gonna tell the story again, but I witnessed it firsthand. One might say I was even… Not victimized by it, but I was certainly targeted by it. At any rate, it’s gone. The Clinton Global Initiative has shut its doors. I wonder why. I wonder why. There were 22 people working there; they’ve all been fired. 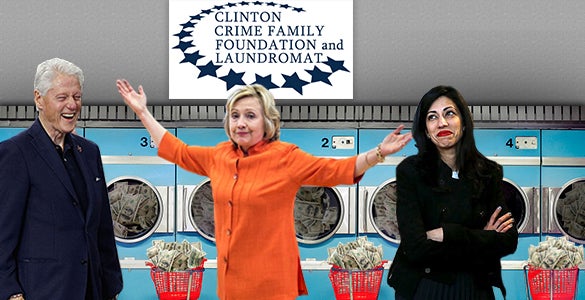 You know one of the most recent tax returns filed at the Clinton Foundation? Something along the lines of… I don’t have the number at the top of my head. But let’s put it this way. The amount of money that actually went to charity was like $3 million, and travel, entertainment, and expenses was $125 million or some such thing. It was all legal. I mean, as long as you give away 10% every year of what’s in the foundation, you’re cool, or maybe it’s not even that much. It may be 5%.

But it was clear that the foundation was set up to hustle foreign donors for Hillary’s presidential campaign. She was even collecting this money while she was secretary of state. That’s what her private email server was all about, by the way, folks. If you’ve not heard this, the reason that Hillary Clinton set up an email server in the house rather than use the State Department/government network is ’cause she was hustling these donations for the Clinton Foundation and speeches, requests for speeches and all of this.

And she didn’t want any of that to be discoverable with Freedom of Information Act requests, because she was soliciting donations from foreign governments and foreign individuals on the pretext that she’s gonna be president someday and would thus be able to pay back with policy or consideration or whatever those that had donated. And the Clinton Global Initiative was an arm of that. Now, it’s been shut down. “The Clinton Foundation announced it’s laying off 22 staffers on the Clinton Global Initiative,” and it says here, “keeping with a plan to deal with the negative spotlight put on the organization during [Hillary]’s presidential campaign.

“The layoffs will take effect April 15, the Clinton Foundation said in a filing with the New York Department of Labor Thursday, citing the discontinuation of the Clinton Global Initiative. The move is part of a plan put in motion ahead of the presidential election in order to offset a storm of criticism…” That’s not what’s going on. There’s no reason for it anymore. It was never what it was for.

If this was a charitable undertaking, why stop it? I mean, good works are good works. Isn’t it important? If you’re really in this for good works, if you’re really in this to be charitable and to help improve the human condition, what does it matter if you lose an election? You still raise money. You still go out for hurricane/disaster relief or whatever. There are still plenty of people to fleece, still many opportunities out there to hustle money.

Why give it up? It’s obvious, isn’t it? The whole thing was a shell to set up Hillary’s presidency and to get the Clintons some walking around money. “Cash money,” as they say. Walking-around money. And now that she’s not gonna be president… Is there any more on her running for mayor? (interruption) Is it mayor or governor? (interruption) And there’s no more scuttlebutt on that? (interruption) Okay. Well, that’s cool. Yeah, 22 people are being laid off at the Clinton Global Initiative.