RUSH: Coach Belichick, a lot of people don’t like Coach Belichick, but I do. And you may be aware that Antonio Brown… Oh, I got an email about this. I don’t have it in front of me. I didn’t print it out.

The email I got yesterday said, “Mr. Limbaugh, you really laughed at what Antonio Brown did videoing the Steelers locker room after the game against Chiefs. But don’t you think that was really bad? Don’t you think that was selfish? I can’t believe you supported what Brown did.” Well, okay. I’ll deal with that in just a second, ’cause maybe the emailer has a point. I did laugh at it. I thought it was… (laughing) It was funny. But, you know, there are characteristics of Millennialism here.

He is a Millennial, and he’s entirely focused on himself. He cares more about his “brand,” he cares more about the likes and approval of people he doesn’t know on Facebook than apparently he cares about the likes and approval of his teammates, maybe. Anyway, in that video, Coach Tomlin of the Steelers is heard referring to the Patriots as “rectal orifices,” although he didn’t use that term. I’m using that term to dress up the language. So they went and they asked Belichick what he thought and here’s what Belichick said. I just love this. This is Bill Belichick. “Any thoughts on the video or Tomlin’s comments?”

BELICHICK: As you know, I’m a not on Snapface and all that so I don’t really get those. Um, but I really just worried about getting our team ready to go. I’m not really too worried about what they’re… what they put on Instant Chat or whatever it is.

RUSH: I just got an alert on my iPhone during the break. “Mike Tomlin says…” His weekly press conference is on Tuesdays, which is today. “Mike Tomlin says Antonio Brown filming his locker room message was foolish and selfish, and Tomlin regrets his own comments in which he referred to the New England Patriots as” rectal orifices. But “selfish” and “foolish.” I was watching ESPN last night. Ryan Clark is now a commentator on ESPN. Ryan Clark was a safety for, as Hines Ward said, the Pittsburgh Steelers, and he’s really had some great insight into this.

Ryan Clark retired just a year or two ago from the Steelers. He was a strong safety. Ryan Clark… There are a lot of hard hits in football. I will never forget, it was a championship game in Pittsburgh, a cold night, Steelers and Ravens. Ryan Clark put a hit on Willis McGahee, a running back for the Baltimore Ravens, and Willis McGahee to this day may not know where he is. I mean, it was — and it was legal. It was a perfectly legal hit. It was one of the hardest hits…

You know, he’s a safety. He’s a strong, powerful guy. But he’s not one of the biggest guys on the field. Anyway, his take on this… He didn’t use the word “Millennial,” but he didn’t have to. You know, Antonio Brown’s 24, 25 years old. He’s a Millennial. He’s grown up with social media. Remember my warning about this, all the social media stuff, this Facebook, and Twitter, this quest for fame, this desire to be liked and noticed. I said, “It’s not good, it is not real, it causes distortions in what’s important. It changes your priorities,” and this is exactly what happens. 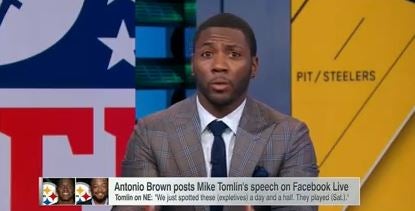 What Ryan Clark said last night was that Antonio Brown doing this, a 17-minute video with his phone in the Steelers locker room while a coach is delivering the team prayer (and he didn’t attend), and then Tomlin’s postgame speech — and he didn’t attend it because he’s taking video of himself still in uniform preening and combing his hair and going the motions of looking good for the camera. Ryan Clark’s point was, ever since he’s been on Dancing with the Stars and ever since he’s gotten national fame above and beyond whatever he’s done for the Steelers, that likes and approval on Facebook are more important to him than likes and approval from his own family.

And he wasn’t… I don’t think he meant that specifically about Brown. I think that is something that’s actually very insightful in a generational sense, and that is this whole social media culture. I’m not fuddy-duddying here; there’s no way to put it back in the bottle. I’m not complaining about it. I’m just observing and shares my observations with you. And I do think it portends problems. People are gonna have to figure out ways to deal with it, particularly like people that employ them and people that need productivity from them.

They’ve gotta find some way to get these people to stop thinking about themselves and to have their priorities straight. I thought Ryan Clark’s comment… Ryan Clark’s illustration that Brown’s desire for acceptance, approval, likes and all that from people he doesn’t even know outweighing the same thing from people he does know, his teammates and his family? I thought it was a profound insight. I really did. And he didn’t condemn it. He was just… You know, he was a former teammate of Antonio Brown’s.

You know, once a Steeler, always a Steeler. But it was really an insightful observation about, I think, generational things at large, not just players in the NFL. Now, Antonio Brown has some leeway because he’s a star. He works. He works hard. He does not let any of these fetishes that he has take time away from perfecting his craft. The league may fine him but the Steelers are not gonna suspend him and they’re not gonna sit him down.

They need him too much. He does his job better than most. It’s just a fascinating thing. And I knew way back when the social media phenomenon started this was gonna be happening. You have the quest for getting noticed, the quest for fame and having it defined by how many people claim they like whatever it is you’ve submitted on “Snapface” or “Instant Chat.” Coach Belichick. I think is a relevant, relevant insight.

RUSH:  Another alert here on the phone: “Mike Tomlin rips Antonio Brown, says Steelers will punish him swiftly for inconsiderate Facebook video.”  That’s all I know.  I haven’t had a chance to look at the video or check into it.  But interesting.