RUSH: When we get a good question on the phones, I will broom the show prep and I will go to the phones, and we got a good one here. And we have another — this is a Millennial? Yeah, qualifies as a Millennial. Millennials are being born in 1984 forward, so this is Nicole in Jacksonville, Florida, says she’s 19. How are you doing, Nicole? What’s happening?

CALLER: Rush, I’m doing fine. It’s an honor to talk to you, Mr. Limbaugh. I’ve been trying to get through to you for two weeks now. I’ve been listening to you since I was 14 years old. I’m Democratic, but I voted for Trump. I just wanted to get your insight on the travel ban, because what Trump is doing right now, he’s just stopping so much crime from coming into the country and people trying to do harm to the country and people just need to give him a chance and just let him tackle it.

RUSH: Well, you know, it’s a great question because of the answer. And the answer to the question is, you know, why aren’t the Democrats giving Trump a chance, why are they reacting this way. Honestly, I don’t mean to sound trite, and I’m gonna back this up with an explanation, Nicole. You will not understand this intellectually unless you understand liberalism. You won’t understand this behavior. You might not like it. You might think the Democrats are crazy. You might think it’s a bit over the top, but you won’t really understand it until you understand liberalism and what its purpose is. 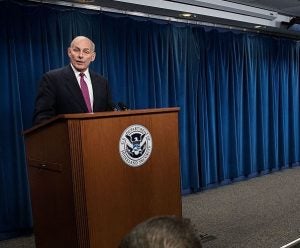 And, in this case, this is not a travel ban, folks. All this is is a temporary attempt to further vet certain refugees from six countries and Syria where the vast majority of terrorist activity has come from. It is an effort to keep America safe. It is also Trump fulfilling a campaign promise. His Homeland Security director — I just got the audio soundbite, not enough time to play it — John Kelly, Homeland Security secretary, John Kelly held a press conference today and during the Q&A, he was asked, “When did you learn specifically Trump would sign the executive order?”

And Kelly says (paraphrasing), “A year and a half ago during the campaign when he told me he was gonna do it. I’ve known since I first met Trump that he was gonna do this.” This is not a travel ban. Everybody that was detained has been released. It’s exactly what Trump said it was going to be: further vetting to keep America safe. In large part here he’s fulfilling a campaign promise.

The left simply seizes an opportunity to recast this and recharacterize this as something that it’s not, to portray Trump as a violator of human rights and civil rights, which is two areas the left thinks that they own, and it’s an opportunity for protest and resistance, which has become their strategy just for the purpose of it. They don’t even need specific reason. The Supreme Court nomination tonight is gonna launch another round of this, another wave of this, and it doesn’t matter what Trump does, until they beat it back, this is going to keep happening. They don’t want Trump to succeed. They don’t want to give him a chance at all.

RUSH: Back to the phones and this is Mary in Graham, Washington. Mary, welcome. I’m glad you waited.

CALLER: Thank you, Rush. I just want to say thank you so much for all you do promoting America and giving us hope and educating us each day. It’s really appreciated.

RUSH: Thank you very much. I sincerely appreciate it.

CALLER: I just want to tell you, I’m extremely upset at these protesters and these demonstrators. I’m a New Yorker. I almost lost four brothers that day. Three of my brothers had the buildings tipped in any which way, they wouldn’t be here. My fourth brother was an airline steward that left 10 minutes earlier on his plane from Boston to LA. They just didn’t happen to pick his plane. I had cousins on the lower towers. I had extended family who was a firefighter that lost his life.

And these protesters do not understand what it’s like to be thousands of miles away, you’re calling your family trying to find out where everybody is, and they continue to protest and want people to just come into this country without any kind of extreme vetting is ridiculous. Those people in New York that had to deal with 9/11 that day, they were going to work. They did not plan to go to war, and those terrorists went to war that day with us.

RUSH: Well, look, I hear everything you’re saying. The protesters would tell you that they’re not immune to the emotions of what you just described. They would tell you that Trump is identifying falsely and stigmatizing innocent people, accusing them because of their religion of being terrorists and he’s being a bigot and so forth. And if Trump will go after them, he’ll come after the people protesting him, and they want people to be afraid of Trump.

They’re trying to gin up this fear that Trump is incompetent and he’s a megalomaniac, that he’s Hitler, that he’s gonna start rounding people up and putting them in camps and so forth, all to obstruct and stop Trump. It doesn’t matter what Trump does, Mary, the specifics are irrelevant. They’re going to resist anything that is, in their minds, the slightest bit controversial.

CALLER: Well, for me, Rush, I know my brothers carry the memories to this day. And when 911 comes they are not mentally in good shape that day.

RUSH: I know. I have a friend who lost a son and still doesn’t think that there has been an adequate response to it.

RUSH: He doesn’t understand the coddling of the people from the religion that did this. He’ll never understand it. I know exactly what you’re saying, a hundred percent.

RUSH: The fact that we don’t want it to happen again and that all that’s happening here, there have been other terror attacks during the Obama administration because there was lax vetting, and because Obama — look, here’s the real deal on this. Most of these people protesting, to the extent that they even know what they’re doing — and I mean that because most of them are just being paid. Many of them naturally oppose Republicans so that’s all it takes. But these are organized protests.

They are not spontaneous and organic. They’re not representative of a majority of the country as they’re made to look like. The truth is that many of these people leading the protests actually think the United States deserves these kind of attacks because of how mean we have been to other people around the world, that we need to get a taste of our own medicine. That’s what you need to understand about ’em, the ones that know what they’re doing.

RUSH: We go back to the phones. Margate, New Jersey. This is Eric. I’m glad you waited, sir. Great to have you on the Rush Limbaugh program. Hi. 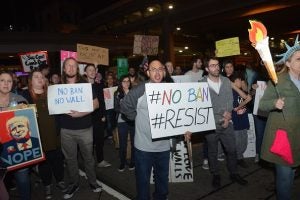 CALLER: I miss The Hutch this time of year, Ken Hutcherson. Listen, I called to make a prediction.

CALLER: If the president doesn’t get out and remind the American people that Obama and the Democrats created ISIS with the void they left in the Middle East, the next time there’s an attack here they’re gonna blame what happened just this past weekend on President Trump.

RUSH: I think Trump believes he’s already done that. That was a staple of his campaign, that Obama and Hillary created ISIS by vacating Iraq prematurely. He may think he’s covered that base. You think he needs to keep saying it?

CALLER: Yeah, because the American people forget pretty fast. And they’re great on the blame game.

RUSH: Right, well, I think you’ve got a point. In fact, I saw this speculated somewhere that here comes Trump with his executive order to ostensibly vet incoming illegals and refugees as designed to make America safer. And then if there is a domestic terror attack, the left is gonna blame this very thing for it by saying that terrorists got really mad when Trump tried to keep them out of the country.

That’s what they’re gonna say. They will say this. You’re right. (laughing) It’s hilarious on its face. They’re gonna blame Trump’s executive order for this because it made the terrorists mad and it made ’em even more committed to getting into the country and beating Trump’s efforts to keep ’em out.

And therefore the next terror attack will be all Trump’s fault. And the same people were those people exonerating Obama, had nothing to do with it, Obama’s policies were irrelevant say, the San Bernardino County massacre, for example. It’s a good point that you have out there, Eric.

RUSH: Mandy in Philadelphia. Glad you waited. Great to have you next on the program. Hi.

CALLER: Hi. Thanks for taking my call.

CALLER: I wanted to start by saying, I’ve been a longtime fan. I’ve been armed with the Limbaugh Letter since the early nineties, and you’ve helped me to identify, avoid, and fight liberalism. Because you are able to explain, and kind of get into the head of the president, I wanted your opinion on the timing of the immigration executive order, which I’m very much for as far as doing it before his cabinet has been voted upon. And also there’s these reports that he didn’t include all of his cabinet members such as General Mattis. What do you make of all of that?

RUSH: Well, I’m like you; I have to guess. There have been some questions answered about this by administration officials, but we’re still left to fill in some of the blanks ourselves. I think one of the things here that is going on that… To me, it’s not a negative. Some people might interpret it as such. But I really think that Trump was intent on showing his supporters that he meant what he said and that he’s not just idle chatter and he wasn’t gonna wait around. And this is one of the major aspects of his campaign.

I think there’s a little marketing and PR in this. Not that it’s not substantive, but I think he was hell-bent on doing this and getting it done quickly so that people realize he meant it and they could continue to have faith in him. I think that he has some advisers (because the cabinet’s not fully in place) who took control of this and got it out as quickly as they could get it out without going through all of the necessary steps just because they thought it was important to do.

Maybe there’s some turf wars going on, too, with people making marks there in the administration for what areas they correctly, and this was a demonstration of that. Whatever errors that were involved here, I think, are resulting from good intentions. I don’t think it’s the result of inexperienced people rushing to do something before they were ready to do it. But clearly the implementation could have been much, much better, and it will be as time goes by. The substance of this thing was fine. I appreciate call, Mandy.