RUSH: Folks, I’m gonna tell you something. I was chatting with a friend last night. I think that there is a very simple — and I alluded to it yesterday. I think there’s a very simple explanation for a lot of this coverage, and it is that Trump is kicking butt. We just had the jobs report come out. It’s being buried today by this other news. But there are more substantive, real, wage-paying jobs in manufacturing and mining and other things. It’s the greatest jobs report for this category in years, and it’s way above everybody’s expectations.

The economy’s chugging along. One poll has Trump’s approval number back up to 46 from the thirties. I went through the list of things earlier this week; all of the Obama administration regulations and executive orders that he implemented that are being unraveled and unwound. I think the mistake people make… I was talking to another friend of mine who’s been really down, the guy I told you is constantly complaining because tax cuts aren’t happening, and he’s thinking Trump sold out.

I said, “You realize you’re making a critical mistake here in the way you’re looking at this? You are associating Trump with the Republican Party, and that’s the mistake you’re making. The Republicans may be not doing things. They may not getting health care done. They may be dragging their feet on tax cuts. But don’t lay that off on Trump. You have to separate Trump from the Republican Party.” “But Rush, you can’t! He ran as a Republican and he’s working with them.” I understand that.

But the things that Trump can do on his own that he is doing are numerous and they are substantive, and he is seriously unwinding and unraveling much of what Obama implemented. And he’s done a tremendous amount. I think Trump is having a phenomenal record or level of achievement here. You’re just not seeing it reported on. That one little AP story that listed some of these things had to be one of the hardest things for them to write. I know it may be difficult to separate Trump from the Republicans. But I’m telling you: The Republicans can have a bad day when Trump’s having a good one.

The Republicans can have a bad week when Trump is having a good one. And, my friend said, “You know what? You’re right! I was making that mistake. When the Republicans don’t do tax cuts, I’m saying, ‘Trump’s a failure.'” It’s too early to say that. The things Trump can do… Look at the end run. He’s had two extra-legal rulings on his travel ban, preventing them. So he’s found ways around this that are even more effective in vetting bad actors than the travel bans would have been. So he’s finding a way around all of the obstacles the Democrats are putting up, of things he can control.

Now, Trump cannot mandate tax law. But of the things Obama implemented via executive order, Trump can strip ’em away and do away with ’em, and he’s doing it. Like at the EPA and any number of other places. His budget — considered to be “dead on arrival” in Washington — is nevertheless a blueprint of what he’s thinking of doing. And I think there’s also this factor, that we haven’t seen in our lifetimes a president under this kind of assault all day, every day, 24/7. We haven’t seen it, and it does not appear to be souring Trump or altering his daily approach to his job at all.

He is still moving forward with the things in his agenda that he can do. I think the longer this goes on and the more meaningful progress Trump has — which is being covered up and masked by all these other distractions in the news. As they keep happening, these are real things that are continuing to happen. These are real things, real items, real events that are ending up unraveling and weakening things Democrats believe in. You couple that with them losing elections, and what we’re left with is the different narrative every day than Trump’s losing it, that Trump’s administration’s falling apart, that the Democrats are carrying the day. 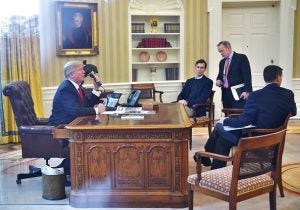 It’s all… That’s all BS. Now, I know that it’s believed by people who see it. I’ve not got my head in the sand on this, don’t misunderstand. I’m not saying that stuff’s not a problem. But I think, on balance, Trump is having a phenomenally successful first 100 days here. I’m just telling you, if Trump were a Democrat and what he was doing was a Democrat agenda, it’s all you’d be seeing. They would have killed if Obama had had this much success early on in unraveling conservatism and implementing his liberalism and in retransforming the country.

Remember, even now you’ll find Democrats who think Obama didn’t get enough done, didn’t take enough advantage of the early opportunities he had when he had both the House and Senate, in vast, vast majorities. Now, I know what I’ve said is arguable, and if you want to argue with me about it, feel free. But I think it’s worth taking a look at some of the positive aspects of things that are happening here. Because they are happening. (interruption) Yeah, I know.

“If a tree falls in the forest and nobody’s there, does it make any noise?” If all these great things are happening and it’s not being reported, does anybody know? Maybe not, but in the real world, they’re still happening. And that means something. Remember, I’m the mayor of Realville. So I know what goes on there, and I know how important it is.