A Relatively Slow Weekend — For Trump

RUSH: Well, so much for that collusion between Trump and Russia. Have you seen the Russians have threatened to hit back at Trump? Strike back at Trump. It was a relatively slow news weekend, for Trump. I mean, not all that much happened, folks. Let’s review it. We have the Russians threatening Trump and us over Trump’s cruise missile attack. 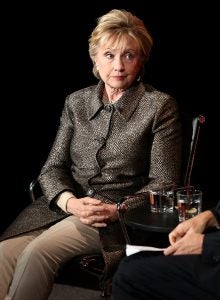 RUSH: You know, Mrs. Clinton had two appearances last week, one on stage at a Broadway play, and another appearance at a women’s issues forum. And she explained all the reasons why she lost.

Remember, she said the big one was misogyny, that there are still a bunch of Archie Bunker lug heads in America that just can’t stomach, just can’t put up with, just would not tolerate a woman president. But did you notice what she didn’t mention in the entire list of reasons or excuses? She didn’t mention Russia. And I went back just to make sure that this memory of mine was correct. She didn’t mention Russia in all the reasons why she lost. At least not that I saw. And wouldn’t you put that at the top of the list? Because that’s what the Democrats all over the country are trying to prove here, is that the Russians tampered with the election, even though there is no evidence for it.

Anyway, back to the slow weekend here. The Russians are threatening us and threatening Trump over our Tomahawk missile attack on Syria’s poison gas supply base. The North Koreans are threatening to attack us, which is as usual. We have news that Senator McCain and Susan Collins and some Democrats tried to work out a deal to keep the filibuster and ditch Gorsuch. There actually was an attempt to save the filibuster on the premise that we needed to save the time-honored and sacred rules of the Senate. Not a word about Harry Reid blowing them up in 2013 or the Democrats blowing them up in 2003.

But that was it. Pretty much it’s busier than most news weekends prior to Trump, but since Trump it’s a pretty slow news weekend since Trump has been elected. The biggest story — well, it’s hard to say that there’s something bigger than anything else, but I’ll tell you, Trump is sending the fleet, or a portion of our naval fleet to the western Pacific, the northwestern Pacific. Now, for those of you in Rio Linda, that means we are sending a flotilla to be near the Korean peninsula where you would find South Korea and the Norks of Kim Jong-un or whatever. 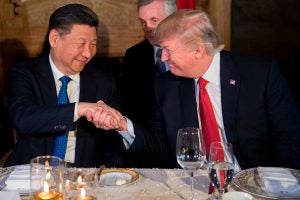 Now, the important thing about this is that the ChiCom president, Xi Jinping, did not object. Now, after all China is to North Korea what Russia is to Syria. They are brethren, they are protectors, they are investors, and the linkage is communism. North Korea is communist. China is communist. And so there is a relationship based on that. This is the same Donald Trump that the Drive-By Media has been telling us for more than a year and a half has poisoned U.S. relations with China forever, and yet the news of the meeting between Xi Jinping of China and Trump, the glow after this meeting is incredible.

And I want to remind you again, whoever staged this in the White House knows exactly what they were doing. On the night that we hit Syria, Trump is dining with the president of China, Xi Jinping, and there are photos of that dinner, and in every photo the ChiCom president is smiling ear to ear. He’s having the grandest time. He’s probably looking at Mar-a-Lago and saying, “How can we duplicate this in Beijing and get away with it?” He’s probably looking at that place and is stunned by it. And he’s just having the grandest time, he’s smiling ear to ear.

And they post all of those pictures the night of the attack, and Xi Jinping smiling certainly creates the image that he’s not unhappy at all with the fact that we sent those Tomahawks into Syria. Whether he’s opposed to it or not doesn’t matter. But the fact that Xi Jinping does not seem to object to our sending a portion of the fleet to be nearby the Korean peninsula is fascinating too. It’s amazing what one little military — and as General Keane said, this was limited, very limited maneuver and one target. Yeah, there are 59 Tomahawks, but it was a limited target.

RUSH: ne little brief addendum before we get to the break. An alternate theory as to why Xi Jinping, the ChiCom president, was smiling all over Mar-a-Lago in every photo taken, even after we had launched the Tomahawk missiles into Syria. It’s buried in a New York Times story. “Mr. Chen added that many” ChiComs — well, they don’t say ChiComs. That’s my word. They said many Chinese, “were ‘thrilled’ by the attack because it would probably result in the United States becoming further mired in the Middle East.”

Mr. Chen, who’s not identified in the brief little excerpt I have, I’m sure he is in the story, but in the little excerpt I have here, he’s not. Just have to figure he’s a ranking ChiCom, Politburo type. Mr. Chen added that many ChiComs were thrilled by the attack, and “If the United States gets trapped in Syria, how can Trump make America great again? As a result, China will be able to achieve its peaceful rise.”

Do you believe that somebody in China actually said the following: “If the United States gets trapped in Syria, how can Trump make America great again?” Do you really think that is how these people in China speak about Trump and his agenda. I read this and my red flags went up to full mast. How can Trump make America great again? (laughing) They won’t even accept the premise that America is great, much less sit here and discuss how Trump could do it except that he’s going to be mired in Syria and, as a result, China will be able to achieve its peaceful rise, Mr. Chen said, using a term that Beijing employs to characterize its growing power: peaceful rise.

“Even though we say we oppose the bombing, deep in our hearts we are happy,” because it will mire America and Trump in the Middle East and that means how can Trump make America great again. (laughing) I wonder who actually said this or who actually wrote that?