Sergio’s Win Had Nothing to Do with Seve’s Birthday!

RUSH: We go to Atlanta. It’s Holly. Great to have you with us, Holly. How are you doing?

CALLER: I’m doing great, Rush. Good to talk to you.

CALLER: I am a big fan of yours, but I’m also a golf fan. 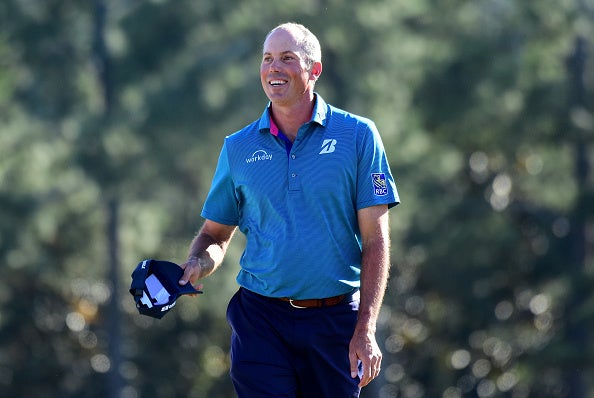 CALLER: I was sitting at the 16th tee yesterday at Augusta, and it was such a good feel-good moment and Matt Kuchar hit his hole-in-one and he was high-fiving the crowd. He took somebody’s hat, he flung it into the air. He got down there, he got his ball, he signed it. He gave it to a little boy sitting there wearing a Sam Snead hat, and it just made you feel great.

RUSH: We saw it. Kuchar is a great guy. You know, he looks like he has a perpetual smile on his face because he’s got joker-like cheekbones.

RUSH: Oh, he is. He’s naturally smiling all the time, and he’s really a great guy. I’ve played Augusta with him, and you’d love him. He’s everything you would hope he would be when you meet him. He’s an excellent, excellent guy.

CALLER: But you feel so good, and we leave 16, we walk up 17 and 18 as we’re leaving, and the leaders are finishing up, and they’re doing their playoff. Then we turn on ESPN. Oh, we’re all fans of Sergio. And I’ve watched enough golf —

RUSH: Yeah, you said ESPN is saying that we’re all fans of Sergio?

CALLER: Yes, that there were chants going up amongst the crowd. I mean, if someone asked me who I want to win and I’m at the Masters, my first answer is, an American.

RUSH: Well, wait a minute. How is ESPN being politically correct by celebrating Sergio’s win?

CALLER: Well, they made it seem like the crowd was cheering for Sergio. And I’ve been to the Ryder Cup —

RUSH: Well, they were. They were. I was watching it. They were cheering for Sergio. I mean there was no chance for an American to win here because —

RUSH: — the playoff was Justin Rose, and he’s a Brit.

CALLER: I just sometimes feel like it’s not okay to be proud of our country.

RUSH: Okay, now, I understand that. I don’t know that I would agree with you on this specific example you’re citing about Sergio, but in a generic sense, liberalism always builds up the people they think are victims of America, and that is usually minorities. And whenever a minority wins, it’s a special victory because it’s a triumph over the evil, gigantic, dominating United States. I know exactly what you mean. I don’t think that’s what was going on with Sergio. I think they genuinely love Sergio. It goes back to he came up with Tiger, Tiger Woods.

I’ll tell you the thing that got to me, since we’re talking about TV coverage. I gotta tread very, very, very lightly here, my friends. They interviewed Sergio after his Thursday round, maybe Friday, and they asked him, “Would there be any special meaning to win this year’s Masters because it would occur on the 60th birthday of Seve, Seve Ballesteros, great Masters champion, great golfer from Spain.” And I looked at Sergio’s face. This is where I have to tread very lightly, but I can’t tread at all now because I’m out of time so, I’ll have to take a brief break. It’s one of these hard breaks, you can’t break ’em, they don’t move, so I’ll finish this sometime.

RUSH: I’m gonna go back to my Sergio Garcia story. We had a caller from Atlanta who was upset. She thought ESPN was showing undue favoritism to Sergio because he wasn’t American and she’s tired of watching CNN and ESPN and all these networks who seem to want to blame America and celebrate when America loses, or when an American loses, or when a minority or some other country’s sports star wins. 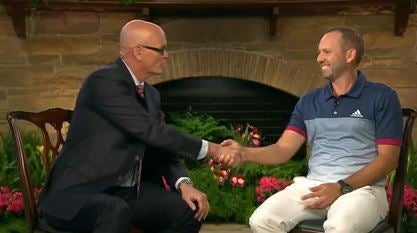 I told her I disagreed with her that that’s what was happening here with Sergio and ESPN. But, in a generic sense, she’s right. I mean, the left always sides up with whoever they think the victim is, and the Americans are always the victimizers, and minorities are usually the victims. Any kind of minority, racial, gender. Any minority is automatically a victim, and CNN, the media always will sidle up to that person. And she detected it, and she’s right about that.

But here’s what I noticed. And to me, this is classic, folks. This is an object lesson in how stories are created. Sergio Garcia is from Spain. There are two other accomplished professional golfers from Spain. One is Seve Ballesteros who died very early in life, age 60, and Jose Maria Olazabal, and both Seve and Jose Maria have won Augusta, The Masters, twice.

So on Friday, after Friday’s round, the media, whoever is covering it, CBS or ESPN, is interviewing Sergio. And I’m watching all during the coverage, I watched it when I got home, and every time they show Sergio, or practically every time, they mention, “Isn’t it going to be so touching and heartwarming if Sergio were to win on Sunday, that’s the 60th birthday of Seve Ballesteros.” I said, “So what? What does it matter?” Except it’s manufactured tear-jerker. It’s manufactured sentiment. And they forced it on Sergio.

In an interview Friday, they’re asking, “Sergio, would it mean something special, would it be even more special to win this on Seve’s 60th birthday?” And I could tell, looking at the immediate facial reaction from Sergio Garcia, was a fleeting moment, but he bowed his head in just a tiny expression of mini-frustration, he looked down, and he came back up, “Look, I don’t want to get ahead of myself. We don’t talk about winning until we’ve won. I don’t want to get ahead of myself.”

“But wouldn’t be wonderful, Sergio, if you won?”

“Well, Seve’s great,” and then he immediately started talk about Jose Maria Olazabal. Jose is more of a contemporary of Sergio’s, and Jose had tweeted him his support and how proud of him he was. My only point, Sergio was close to Seve, but my guess is — purely a guess — this is why I’m on thin ice here. I’m walking a very, very narrow line here with this. But it’s all because that facial expression I’m sure I saw.

There was no way Sergio was gonna say, “Look, Seve isn’t here. Seve is not swinging the club. Seve’s spirit is not determining my strategy. I’m the one playing.” But they all loved Seve. And there’s nothing wrong with Seve, don’t misunderstand. My point here is how a story of sentiment and emotion gets created and then forced on people, and they have to attach themselves to it, ’cause there’s no way Sergio can say, “I don’t care that it’s Seve’s 60th birthday or his 160th. I’m playing, and if I win, I win.” He can’t say that. I don’t even know if he thought that.

And to tell you how effective this is, I played golf Saturday and Sunday, I got out of the car both days at the place I’m playing, two different places, and the bag drop guys and the caddies, “Wouldn’t it be great if Sergio won on Seve’s 60th?” Oh jeez. Can’t escape it. And to me, maybe I’m too into this stuff, but this is how it happens. In this case it’s innocent, in a sense. But this is how stories that do not exist are manufactured, and people are plugged into ’em and then have to go along with it, because if you don’t go along with this, what kind of reprobate are you.

And as another aside, whenever Sergio got the chance to talk about Jose Maria Olazabal, he did, because none of them were talking about him, it was all Seve. They loved Seve. I met Seve. Gary Player had a tournament at Wayne Huizenga’s course up in Palm City for a long, long time. That’s where I met Kathryn, by the way. She was running Gary Player’s foundation, running the tournament and she thought I was too controversial to attend. But somebody told her that it would be a good get. So she invited me and I went.

And the second year I’m sitting next to Patrick Duffy, all the celebrities are lined up. And Seve Ballesteros, one of the greatest golfers of all time, was putting on a demonstration of how to get out of a sand trap, and he couldn’t. It was the most amazing thing. Gary Player had to jump in the trap and take over. Seve was just having a bad day, couldn’t get out. He had been retired, I think he had just the beginnings of his illness. But he was just a prince of a guy, nice guy, I don’t want anybody to misunderstand me here. It’s just that Seve’s birthday had nothing to do with Sergio winning this.

But everybody hoped, they wanted to believe that there was an extra inspiration for it. Okay. That’s it. I’ll be prepared — (interruption) yes, I did. I’m gonna get beat up like you haven’t seen for this. By all the left-wing comedians, it’s gonna be, “Rush, do you have no soul? Do you not have one ounce of compassion? Not one? Do you have to find a liberal communist behind every golf –” Some such thing. This has nothing to do with liberalism or communism. This is how media works. How media manufactures stories and plugs everybody into it whether they want to be part of it or not. I could give you countless other examples.

I mean, we’re gonna see things like this. It happens every day in politics, these kind of things that add sentiment, supposed to touch your heart so that you can’t object to it, you can’t disagree with it, you can’t reject it in any way. In this case, it’s harmless. But when you start talking about political events and other things, it would be like gay marriage or anything that’s a cultural upheaval, this is how it’s done.