As I Predicted, the ChiComs Choose Us Over the Norks

RUSH: Yesterday on this program, I’ll never forget this, because this worked out so well. I forget how it came up, but Snerdley asked me, “You don’t really think –” What was your question about North Korea and China? You were of the — oh, that’s right. Snerdley says, “Aren’t you worried about World War III with what the Norks are doing and the ChiComs and their allies?”

And you know what happened? At six o’clock, I’m at home minding my own business and I say, okay, it’s time to get back to the show prep. And I find a story that’s published at ZeroHedge, and it’s about just that. That the ChiComs have not quite delivered an ultimatum, but they sent the message to the North Koreans: If you guys don’t tamp this down and stop this you can forget about any help from us and we will resort to measures previously unused in dealing with you. I know what it was. A friend of mine sent me that story, the subject line was: “Wow, who would ever believe this?” 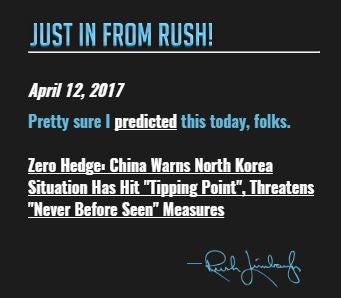 And I looked at it, and I said, “Damn, I just predicted this two hours ago, three hours ago.” So I got hold of Koko at the website and I made it a Just In From Rush, and we linked to the segment we discussed yesterday. So in this case you have the ChiComs, after what Trump called a successful phone call with a ChiCom leader and after a successful meeting here at Mar-a-Lago with the ChiCom leader, we have now, the appearances, anyway, of a new alliance between the ChiComs and us with the Norks left out.

And my instincts were yesterday that this was going to be how it eventuated anyway. There’s an ideological tie between the Norks and the ChiComs, and that’s communism. But believe me, the Chinese — I don’t have it exactly as I said it yesterday, but the Chinese are not gonna risk everything that they have done, succeeded in economic progress, military might. They’re not gonna risk all of that in siding with the North Koreans over us. In fact, they’re gonna do everything they can to make sure the North Koreans don’t do anything but keep missing.

Now we’ve got stories that the Norks have sarin-tipped missiles that they’re ready to fire. You know, the Norks have been launching all these missiles, and the South Koreans have been going out there in the ocean retrieving as much of the material from the rockets. You know what they’re finding? They’re finding guidance systems made in the United States in North Korean rockets.

I wonder how many of you are gonna remember this. Do any of you remember the name of a program of a company from the Clinton years called Loral Space? Anybody remember that name? Some of you might remember, but you probably don’t remember what it was. I’ll explain it to you.

The ChiComs, during the Clinton era, were having trouble achieving orbit, geosynchronous orbit with some of their satellites, and that meant they were having guidance problems with their ICBMs. The Clintons needed something out of the ChiComs, so they got hold of the guy that ran Loral Space, a huge Democrat donor. And they sent people from Loral Space over to Beijing to examine used missile parts from failed Chinese launches and shared with them guidance and other technology to help the Chinese be able to keep satellites in geosynchronous orb and help them with their guidance.

Well, if you do that you know the ChiComs are gonna share some of that with the Norks. We’re talking about the 1990s, now. And so the South Koreans have found evidence of American technology in North Korean missile guidance systems. It has to come from Loral. It doesn’t have to. I mean, the ChiComs may have, in the interim, developed their own, but it certainly was true in the 90’s that Loral Space, Democrat donor — I remember when it happened, we couldn’t believe it. We couldn’t believe that Clintons were sending an American company over there.

RUSH: On this North Korea-ChiCom thing, the ChiComs even told the North Koreans: Do not think Trump is bluffing here. He’s not bluffing. Do not even think of entertaining the idea that he’s bluffing. Do you think the ChiComs would have ever told the Norks anything like that about Obama? Do you think they would have ever said, “Hey, hey, you gotta take this guy seriously. He’s not bluffing.” There is no way.

To me this is a major, major development. If you’re in the middle of forging an alliance with the ChiComs because the immediate threat — forget what happened during the campaign — the immediate threat is these lunatics in North Korea are launching missiles. They don’t know how to aim ’em, but they’re trying to, and they’re potentially dangerous. And Trump’s on record as saying, “You better not, you’re gonna regret doing it.”

He backs up what he says. He’s formed an alliance with the ChiComs on this particular instance. Everything he does is a negotiation. Why would he undercut himself by continuing to accuse them of currency manipulation when he needs them for something here? Everything with Trump is a negotiation, and it’s based on what’s happening now and what he wants now.

RUSH: On this North Korea-ChiCom thing, the ChiComs even told the North Koreans: Do not think Trump is bluffing here. He’s not bluffing. Do not even think of entertaining the RUSH: Bashar Assad in Syria says that the chemical attack didn’t happen, 100 percent fabrication. It didn’t happen, and he didn’t do it. Somebody is claiming it happened to make him look bad, but he didn’t do it. He would never gas his own people.

Now, this story that I was emailed last night around six o’clock: “China Warns North Korea Situation Has Hit ‘Tipping Point’, Threatens ‘Never Before Seen’ Measures.” This is the ChiComs threatening the Norks. “After warnings yesterday, and on the heels of a ‘very good call’ with President Trump, China has escalated its threats to North Korea over its nuclear tests. In another Global Times op-ed, China warns ‘if the North makes another provocative move this month, the Chinese society will be willing to adopt severe restrictive measures that have never been seen before…'”

That’s from an editorial in the military-focused Global Times. It’s a ChiCom tabloid. It’s owned and operated by the ChiComs themselves, so it’s a ChiCom Communist Party newspaper, and they’re threatening the Norks in it. They said that the Norks’ “nuclear activities must not jeopardize northeastern China, and that if the North impacts China with its illicit nuclear tests through either ‘nuclear leakage or pollution,’ then China will respond with force.”

The editorial may as well have been written by Xi Jinping. This is the bottom line for China. Should it be crossed, China will employ all means available, including the military to strike back at the North Koreans. That’s never happened, folks. We have never seen anything like this. And yes, I, your beloved host essentially predicted this during yesterday’s program. This news cleared by 5:30, 6p.m. last night. And there is no question that it is the result of whatever meetings, relationships have occurred and been formed between Donald Trump and Xi Jinping. I should say Xi Jinping, the ChiCom grand pooh-bah.

None of this was predictable. There isn’t a political wizard at a think tank on earth that would have ever predicted this, and especially if they had relied on Trump’s campaign rhetoric. On the campaign trail, Trump just was merciless going after the ChiComs for their unfair trade practices and their currency manipulation. Got their attention, didn’t he?

You know the one thing I have learned — it’s not a matter of learning — one thing I have observed over the course of many years is that in Washington, and I think this is even true of the Bush administration, although he was considered to be a cowboy. But there’s really not a whole lot of tough talk that’s come out of Washington, particularly in the last eight years, there hasn’t been any. The toughest talk that came out of Washington was aimed by Obama and his Regime at conservatives. Then the next level of toughest talk was aimed by Obama at our international allies.

We’ve been in this feeling-guilty-over-ourselves mode. We’ve been behaving like we need to excuse ourselves for being so powerful and that we’re gonna do something about it. We’re gonna limit our power. We’re not gonna use our power because we’ve done it so poorly and we’ve mismanaged it so the badly. We’ve been very, very mean with all of our power, which was the message from the Obama administration.

Now, here comes Donald Trump who doesn’t function in the world where all of these experts are trying to analyze him.