Where Were All the Stories on Obama’s Aides?

RUSH: Hey, folks, let me ask you a question here. In the eight years of the presidency of Barack Hussein O, do you remember any stories that discussed palace intrigue in the Obama White House? Did we get stories of competing aides sandbagging and sabotaging each other, seeking Obama’s attention?

Did we have any stories that positioned any of Obama’s advisers as smarter than he was? Did we get any stories that treated Obama’s advisers as the real brains behind the operation? I’ve been asking myself this during the break. Well, Valerie Jarrett stories were all about how tight they were. When you read a story about Valerie Jarrett and Obama, I swear the only reaction I had, well, where’s Michelle in this duo?

Okay, so if the Bannon equivalent is Valerie Jarrett, where were all the stories warning of the dangers of Valerie Jarrett and how we need somebody in there from Goldman Sachs to moderate the extremism? Nowhere. Got none of it.

But I want to remind you this. In the Reagan years we got exactly this that we’re getting now, and particularly in the second term. We had supposed intrigue between James Baker and Mike Deaver and Nancy Reagan. And Nancy Reagan was the great protector defending Ronnie from all of the people in his administration that meant to undermine him. And they made Nancy Reagan look like an absolute Fruit Loop because she supposedly relied on astrology every day to guide her husband’s presidential strategy. It’s amazing.

What are the odds that a whole lot of this is exaggerated way beyond what is real? I don’t doubt that there is leakage going on, and I don’t doubt that there are people within the White House maneuvering and vying for power and closeness to Trump, close proximity for the purposes of influence. But who put them there in the first place, folks? The way some of these stories are written, you got Trump actually hiring saboteurs. Trump has actually hired people trying to undermine him, if you listen to this media stuff.

And I’ll tell you something else. Just one more thing here before we move on. As you know, I have a fundamental belief system when it comes to believing and observing Washington politics. And it is this: I reject what is the conventional wisdom almost automatically, because conventional wisdom is groupthink. And if everybody is thinking and saying the same thing, then there really isn’t any thinking going on.

Instead, there are orders being given, or there’s indoctrination. But if everybody’s saying and thinking the same thing, and if that becomes the conventional wisdom, then whatever else is going on, thinking is not part of it. So the conventional wisdom right now is that Bannon is a jerk, that he’s an extreme danger to the normal standing of the United States and has to go and that Trump is beginning to see this. And he’s beginning to see this because of the sane influence that is being exerted by a Goldman Sachs liberal Democrat named Gary Cohn.

And so since there’s a liberal Democrat from Goldman Sachs, he’s being portrayed in wonderful terms, a moderating influence, an intelligent influence over Trump, an influence that is guiding Trump to a different era. It’s just too camp. Maybe what’s being written is what a lot of people are hoping will come to pass, or hoping will be the case. But what if what we’re reading about this and hearing, what if very little of it or not much of it happens to be true? Just to pose some other possibilities.

What if — and I’m just throwing it up against the wall here. I don’t know that any of these circumstances I will express in these questions is actually the case. But what if what’s really going on in there — and I formulated this because of this hit piece on Jared Kushner yesterday. And this hit piece has not gotten any play. It’s amazing how this story, it was a Washington Free Beacon story, and it was a hit piece on Jared Kushner, how this little inexperienced young punk 36-year-old doesn’t know diddly-squat is trying to take over the whole National Security Council.

I said, now, who would leak that? Well, somebody obviously high up in the NSC doesn’t like Jared poking around in there. The only thing we’ve heard about the NSC is that Bannon tried to worm his way in there and that Trump kicked him off, but even after Trump kicked him out of it we saw him seated in the NSC meeting in Mar-a-Lago last week. Said, what the hell’s going on here? 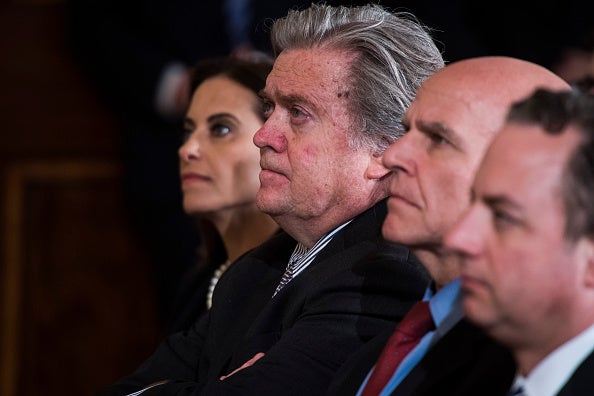 So now they’re leaking on little Jared, leaking on poor Jared, he’s trying to take over the whole thing. So somebody at the NSC is either really scared or really protective of their turf. Now, this area’s run by a guy, H. R. McMaster, who’s very close to retired General Jack Keene of Fox News and David Petraeus. And these guys, they loved the hit on Syria, they loved dropping that bomb on ISIS, and they want to go further.

What if — I’m just throwing this out there — what if the real alignment is that Bannon and Kushner are actually aligned trying to fight off this other faction? What if Bannon’s not isolated? “What do you know Rush that we don’t?” I don’t know anything. I’m just sharing with you the thought processes I experience as I take all this stuff in. And, remember, it’s all under the umbrella of I don’t believe the conventional wisdom. It’s almost policy with me. I reject it out of hand. ‘Cause it’s always manufactured. And if everybody’s thinking the same thing, why do I want to join that crowd anyway?

And the conventional wisdom is that Bannon’s trying to be isolated, that Kushner and everybody else is trying to throw him out. Yet he’s still there. So it is intriguing, but the even more important thing about it is that we never see any of this kind of stuff happen in Democrat administrations. But does it? You know damn well it does because people are people; human nature is human nature. You know there’s people all over the Obama administration fighting to get close to him, wanting to be in the glow, in the light, everybody loved Obama, everybody wants to be as close they can.

You know damn well this kind of infighting was going on, but to protect Obama the media would not dare report any of it because they couldn’t dare report that Obama was not in total control every minute of every day of his regime. But they love reporting that Trump has no control of that’s going on and needs all these outsiders to know even which way to walk after he gets up every day. So you have to exercise extreme caution in what of this you choose to believe.

RUSH: Let me put one more thing out there, since we’ve alighted on this tangent here. When we’re talking about Trump, my question is, “Does anybody really understand him? Does Bannon? Does Gary Cohn? Does Dina Powell?” I’m pretty sure Ivanka knows her dad. But these other people, do they really know Trump? I know they all think they do. And I think I do. I think… well, you know what I think. I don’t think there’s anybody better to explain Trump, if you don’t understand him, if you’ve got a problem with him, than I, El Rushbo.

But I wonder if — and it’s all rooted in this very simple thing that people can’t come to grips with. And that is, Trump doesn’t have a political philosophy. He’s operating in the world of politics. He knows he’s in the world of politics, but he has not done what most people who would want to succeed in politics would do. They’d learn politics. They’d spend years learning it. And they’d go get elected dogcatcher and then move up from that. And they’d start building the political coalitions that you have to build. And you start meeting and learning the fundraisers and the donors.

He didn’t do any of that because he’s in it to turn it upside down and shake it up and shake it out so that the all the loose change and junk falls out of it. But the people in politics don’t know anything but that, and particularly left-wingers who have had never worked in the private sector, so they have been hopelessly unable to understand him. They never will. They see the world is made of find flip-flops. In politics you can’t change your mind.

Now, we agree if it’s core principles we’re talking about, but everywhere else in the world it’s called learning to adapt. In politics, uh, uh, uh, that’s called flip-flop and we gotta get rid of flip-floppers and both parties are guilty of it. Trump doesn’t show the slightest concern at maybe exhibiting flip-flop behavior. He spends a year campaigning on the premise that the ChiComs are currency manipulators and then after a week of meeting with the head ChiCom and talking about North Korea, all of a sudden the currency manipulation doesn’t matter.

“Well, he lied during the campaign, Rush, that’s why.” No. “Well, then he’s a flip-flopper.” No. Something’s happened that in his world it makes sense to not start bashing the ChiComs over currency manipulation right now. But if they misbehave, it can easily come back. But I think it goes even deeper than that. 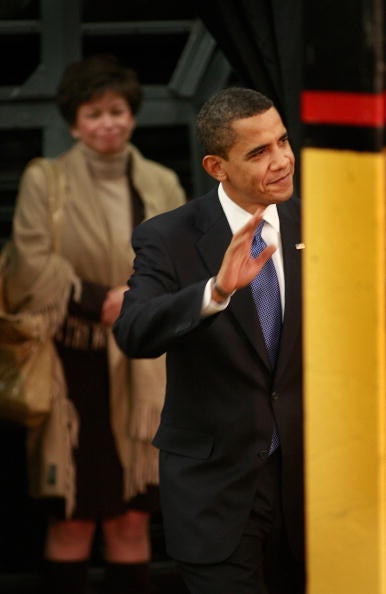 We haven’t had any news stories or profiles on any of the people who were influential in shaping Obama. We’ve had books by people that are not the media. I’m not saying the profiles aren’t there, but that the media hasn’t. Meanwhile, we know what Steve Bannon’s electric bill was when he lived in Florida in 2012, and we know whether he paid it or not. The Washington Post on a Sunday morning did like a 7,000-word piece on all the places Steve Bannon has lived and all the places he stiffed in terms of paying the electricity. He’s a presidential adviser. What is that all about?

It’s obvious and clear what it’s all about. If you do 7,000 words on all the places the guy’s lived, first thing you realize, “Man, this guy is not very stable. You can’t count on this guy hanging around anywhere, that’s number one.” Then you get the details, how the guy stiffs the electric company, stiffs the cable bill. So you get the picture. Yet everybody around Obama, angelic and prince-like. So all this I’m just saying be very, very suspicious of all of this stuff like you are with anything else in the Drive-By Media.