RUSH: Are the Democrats tired of winning yet? Ossoff is running around still calling about the win for the ages. Mika Brzezinski on MSNBC today begged Obama to come back and lead the Democrat Party, and I said, “Go for it!” 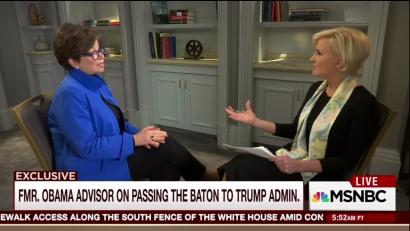 Man, that’s the best thing we could have for Obama to come back. He’s the architect of the Democrat Party’s electoral disaster! They want him back? Bring him back! Keith Ellison, who ran for chairmanship of the Democrat National Committee … We’re working on getting the audio of this. He doesn’t want Obama. He doesn’t want Obama. Nope. He said, Obama’s the problem; Obama’s why we’re in the electoral hinterlands.

Anyway, there’s that, any number of other things. We just barely scratched. So hang on, folks. We’ll come back, we’ll continue before you know it right after this.

RUSH: On the cutting edge of societal evolution. Okay. We have the Ellison sound bite. Let me do this so we get it done and move on. MSNBC host asks for Obama to come back and save Democrats. That would be Mika Brzezinski on PMSNBC. It was an interview with the former White House Adviser Valerie Jarrett pining for the days that Obama was the head of the Democrat Party. She said (imitating Mika), “Could do me a favor, (crying) could you ask Obama to come back and save the party? And tell ’em what to do?”

So yesterday in Minneapolis, University of Minnesota Humphrey School of Public Affairs, the vice chair of the Democrat National Committee, Keith Ellison, spoke on the future of the party. There was a Q&A. Question: “Was President Obama responsible for some of the failures of 2016? And if so, how?”

ELLISON: Yeah, he was, and, look, I’m a great fan of the — President Obama. I totally voted for many things that he supported — Dodd-Frank, Affordable Care Act, I could keep going, wonderful achievements. But Barack Obama could have been a better party leader. And I think the fact that he wasn’t has put his legacy in jeopardy. Your legacy’s not a building that he’s gonna construct in Chicago housing his presidential papers. His legacy is the work that he has done, which I believe is tremendous, but given that we did not — we lost a lot of statehouse seats, governorships, secretary of states, his true legacy is in danger, and I think that he can’t say that he wasn’t part of those losses. I mean, who else?

RUSH: Who else was responsible for — this guy sounds like me. This is getting dangerous!